INFINITE’s L opened up about some of the difficulties he went through as an actor on the June 9 episode of JTBC’s “Ask Us Anything.”

On the show, L talked about “turtle neck” that shows up next to his name as a related search on Korean portal sites.

He said, “I don’t have a turtle neck, but I acted as a cheonmin (person of the lowest social class) in ‘Ruler: Master of the Mask.’ In a way, a cheonmin cowers, so my back was crooked while acting as a cheonmin.”

He continued, “But then this cheonmin became a king. Because he still had the habits of a cheonmin, his back still had to be crooked. Seeing this, people said that I had a turtle neck.”

The “Ask Us Anything” members then asked them to show them what he usually looks like from the side, and he showed them his realistic turtle neck.

L stated, “It says it on my related searches and if you look at my articles, [turtle neck] is in the comments. To be honest, if there are 1,000 comments, I read 1,000 of them. I can learn about what I’m lacking through them, but of course, there are also personal attacks.”

He added, “One time, I wasn’t even appearing in this drama and there were over 200 comments saying that I was bad at acting in that drama.” 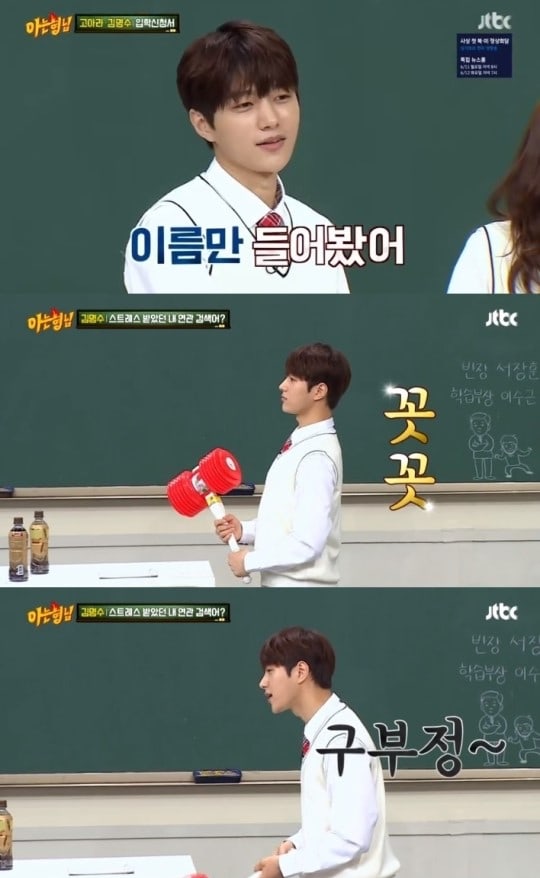 The idol-actor also talked about a time he became too focused on acting. He revealed, “There were many times when it was difficult while doing emotional acting. You know how you get a knot in your stomach when you cry too much? There was a time I had to go to the emergency room because of bad stomach cramps. It was worse because I was nervous.”

He also shared as a quiz question about himself, “There are times when people around me say that they feel sorry for me. There is something that you all can do but only I can’t do.”

The actor explained, “I ate a lot once when I was young and threw up, and I haven’t been able to eat it since then.”

The “Ask Us Anything” members asked, “Why didn’t you then say that you can’t eat black bean noodles? You could have asked to change it to a different food.”

L answered, “It was in the script, so I ate it. It was a bit weird to change what was already decided. It was my first time eating it in awhile because I have never paid to eat it myself. If I made it obvious, it could have ruined the atmosphere.” 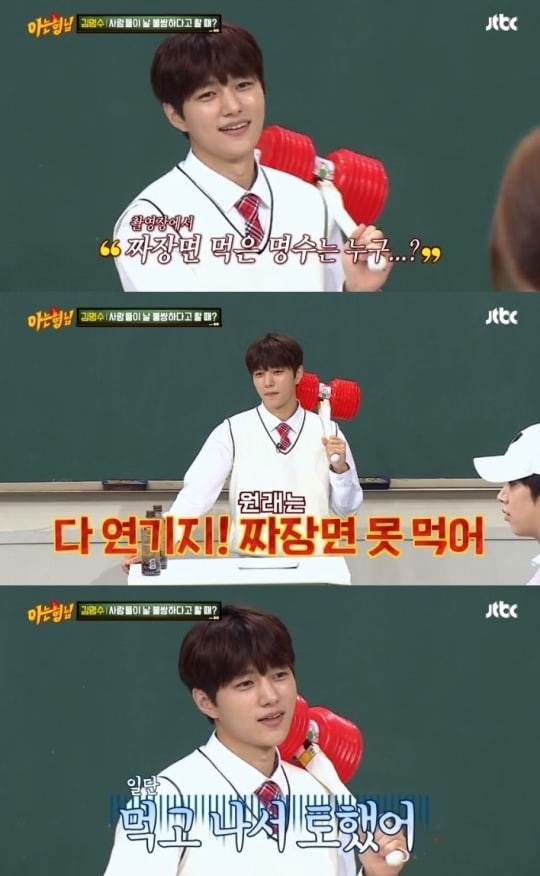 He also surprised the members by revealing that he naturally has extremely curly hair. The INFINITE member showed them a photo of his graduation photo where his curls were clearly visible.

L replied, “Kang Ho Dong’s hair is straight so I’m really envious. If I could change it, then I would do it no matter how much it cost. My hair right now is [straight] permed. I would give anything to have straight hair. I am very cautious about it every time I monitor [my acting], and it takes a long time at the salon.”

Knowing Bros
INFINITE
Kim Myung Soo
How does this article make you feel?