Watch: Taiwanese Actor Jasper Liu Spends A Day With Seungjae After Expressing Love For Him On Instagram

Jasper Liu hung out with Seungjae on KBS 2TV’s “The Return of Superman”!

On the June 10 episode, the Taiwanese actor arrived in Korea and visited Seungjae’s house.

In an interview, Seungjae’s dad Go Ji Yong explained that after he saw the actor’s post on Instagram about Seungjae, the two had exchanged messages. He invited Jasper Liu to his home after hearing about his plans to visit Korea.

Jasper Liu had previously posted photos of him watching Seungjae on the show on his Instagram.

During his interview, Jasper Liu explained, “This is my personal opinion, but I think Seungjae resembles how I looked when I was younger. I also like animals and dinosaurs.”

At first, Seungjae and Jasper Liu shyly exchanged greetings in Korean and Chinese. They quickly bonded after playing with toys and singing together, surprisingly communicating in English. Jasper Liu said that he was currently learning Korean and tried his best to speak the language. When Seungjae received a dinosaur backpack as a gift, he thanked the actor in Chinese and Jasper Liu responded by saying, “I love you” to him in Korean while making a heart with his arms. 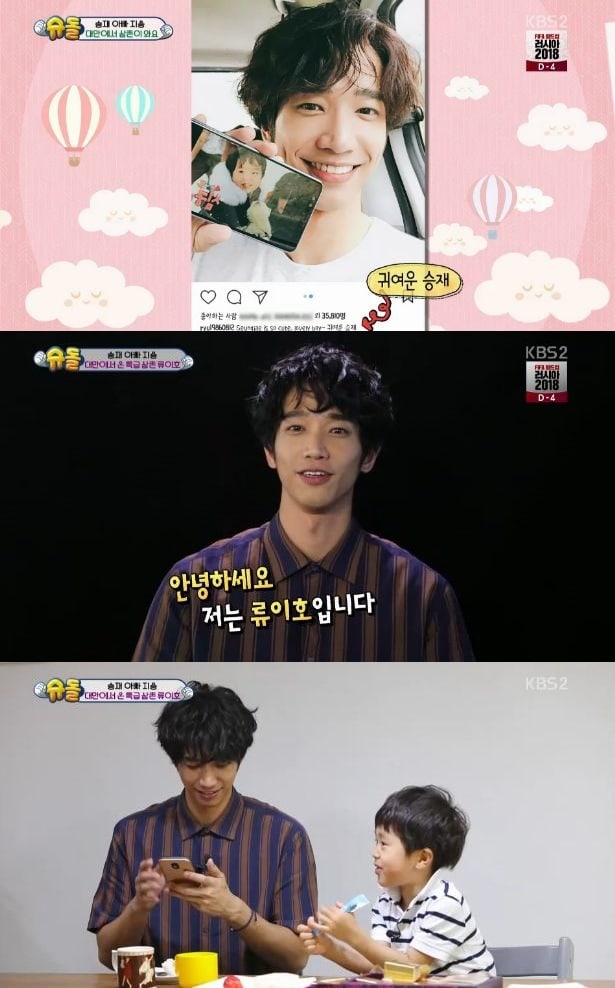 For dinner, the trio headed to an outdoor food cart so that Jasper Liu could eat Korean food such as sliced raw octopus, chicken feet, and sea eel. He happily let Go Ji Yong order, but couldn’t hide his shock when the plate of sliced raw octopus arrived at their table.

With the encouragement of Seungjae, he tried the dish and made him laugh when the octopus stuck to his mouth. After their hangout, Jasper Liu said, “Seungjae. Let’s meet in Taiwan. I love you!”

After the episode aired, he posted on his Instagram about his appearance on the show. He wrote in Korean, “The staff of ‘The Return of Superman,’ Seungjae, and Seungjae’s father, thank you so much for inviting me. This was my first time going over to a Korean friend’s house and it was a really cool, fun experience! It was regretful that my Korean skills are still really lacking, but thanks to you, I had a great time. Thank you! I’ll really have to work hard to learn Korean! Cheers!”

Watch clips of their meet-up below.

Check out the latest episode of “The Return of Superman” now!

The Return of Superman
Jasper Liu
Seungjae
How does this article make you feel?