The cast of SBS’s “Master in the House” shared their dream proposals.

On the June 10 episode, the members met up with their newest master and soccer legend Park Ji Sung at his museum. He explained that the museum is a special place for many reasons, revealing, “The reason why this place has my past, present, and future is because I proposed right here.”

Park Ji Sung said that he filled the museum with photos of him and his now-wife Kim Min Ji and hid a letter in the exhibit. After she saw the photos, he handed her flowers and read out loud his letter to her.

In the letter, he had written, “This is a place that has everything about soccer player Park Ji Sung. Just as I was passionate about soccer, I will now pour all of my passion into being the husband of the one woman in front of me.”

Speaking to a camera, Lee Seung Gi joked, “I need to create a museum in order to propose. A museum is necessary.” 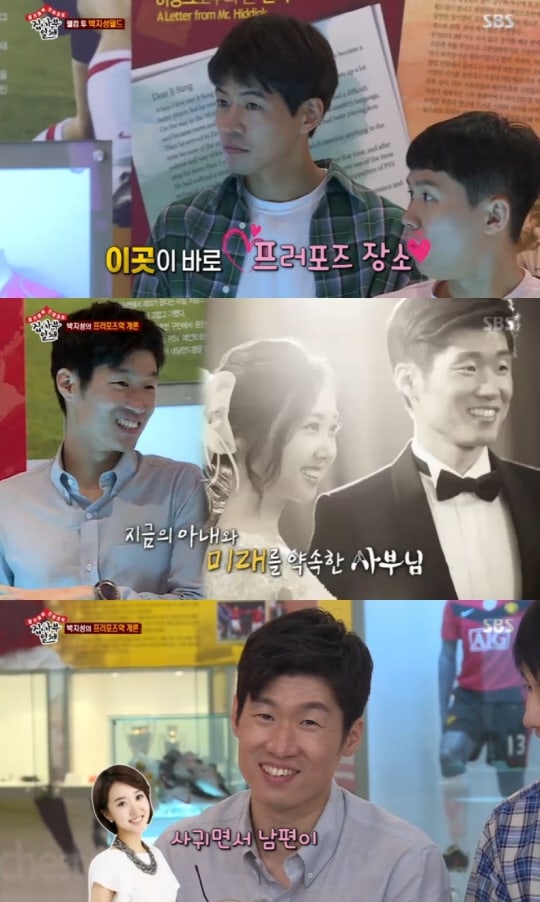 The members then revealed how they plan to pop the question to their future wives.

He also acted out what he would say during his proposal. He said, “I was so happy that many people laughed because of me, but I think I’ll now be happy for the rest of my life because from here on out, I’m going to make you laugh for the rest of your life. Will you marry me?”

The other members then burst out into laughter after he was finished. Lee Seung Gi commented, “You’re funnier when you’re serious.”

Park Ji Sung gave his review of the proposal. “The feeling of it was really good,” said the master. “But I think it may need to become a bit more concise.”

Lee Sang Yoon talked about a small, quiet town in France. He added, “I’ll take her to a field and enjoy the moment together.” In a video message to his future wife, he continued, “What do you think? Isn’t it nice? It’s a place I come to every time I rest. I now want to come here with you every time.” Expressing his approval, Park Ji Sung clapped and gave him a thumbs up.

BTOB’s Yook Sungjae said this was difficult because he had never thought about it before. He asked Melodies (BTOB fans) to close their eyes for this part.

Speaking to the camera, Yook Sungjae said, “On the perfect girl that you are, I want to leave a blemish that is myself.” Yang Se Hyung cracked up and everyone else followed suit. Lee Seung Gi turned on his personal camera once again to comment, “Yook Sungjae is cheesy!”

Touching Yook Sungjae’s knee, Park Ji Sung suggested, “Why don’t you think about this again? Where will you make her cry and move her?”

Lee Seung Gi was up last. He pretended to propose, saying, “While singing, acting, and doing variety shows, I worked with words up until now. But, I knew the moment I met you. You’re the one and only woman I can listen to. If I can be with you, then I’m confident I won’t speak one word and only say necessary things. Will you marry me?”

Yang Se Hyung commented, “You’re talking too much even now!”

See them act out potential proposals below, and check out the latest episode of “Master in the House”!