With just a couple of days left to go until the long-awaited premiere of Mnet’s “Produce 48,” Mnet held a press conference on June 11, answering questions about the show and addressing various controversies. 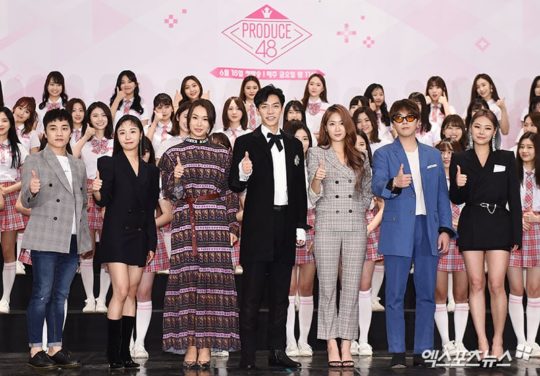 “Produce 48” is a joint project between Korea and Japan that combines the systems from “Produce 101” and Japan’s “AKB48.” A total of 96 contestants will participate in the program, including both trainees from Korea and Japan, and the final girl group will be made up of the top 12.

PD Ahn Jun Young first spoke about how it’s not easy to create a program like “Produce 48”: “I didn’t even think that a day like today would happen. Making a program with a different country is hard. But regardless, the trainers and trainees are working hard to realize a common goal.”

He continued, “We have a slogan saying to become one through music. Rather than just Korea and Japan, we wanted something that could reflect a common dream across the globe. We hope that this show isn’t seen as a competition between Korea and Japan.”

The producers of the show then addressed controversies regarding the show, first that some Japanese trainees have a right-wing political bias. AKB48’s side of the “Produce 48” team said, “We’ve looked into the various controversies, and we’ve confirmed that there is no political undertone.”

Regarding the use of school uniforms for the show when there are some adult trainees, PD Ahn Jun Young said, “On set, we don’t call them school uniforms, we just call them uniforms. There are a lot of young trainees. We think a school uniform is appropriate for their age and showing a healthy image. There may be a lot of concern because this season is for female trainees, but we will do our best so that there are no problems.”

Mnet director Kim Yong Beom added, “These issues come up particularly for female seasons, but we used school uniforms for the male season, too. When trainees wear school uniforms or sports uniforms while living in dorms or doing group dances, there is something that changes in their mental approach.”

For “Produce 48,” though both Korean and Japanese trainees are participating, voting will only take place in Korea. Kim Yong Beom said, “Because the AKB48 members are incredibly popular in Japan, we determined that the gap is just too large with the Korean trainees. Of course, there are some Korean participants that have already debuted, but generally, the Korean trainees are starting with no fan base, so voting will be done exclusively in Korea.”

There will be no set number of Korean and Japanese trainees in the final group. Kim Yong Beom said, “We know that there are going to be rumors about this, but regardless of nationality, the 12 that are most loved by the nation’s producers will make up the final group.”