SHINee Shares Stories From Filming “I Want You” MV

SHINee talked to fans about preparing for their latest release during a V Live broadcast on June 11.

About their newest mini album and title track “I Want You,” Taemin said, “It’s the second album in our triple title relay. There are five tracks and it’s full of SHINee’s music.”

He continued, “It’s a fun song that matches well with the summer. The chorus in the second half of the song is addictive and the colorful MV expresses SHINee’s personality.”

Minho added, “I filmed the most, but I don’t appear in it much.” He said he was curious about the underwater scene that he filmed, but it didn’t make it to the MV.

Key also mentioned the B-side track “Drive” saying, “It’s a song that describes the feeling of liking someone with driving.” 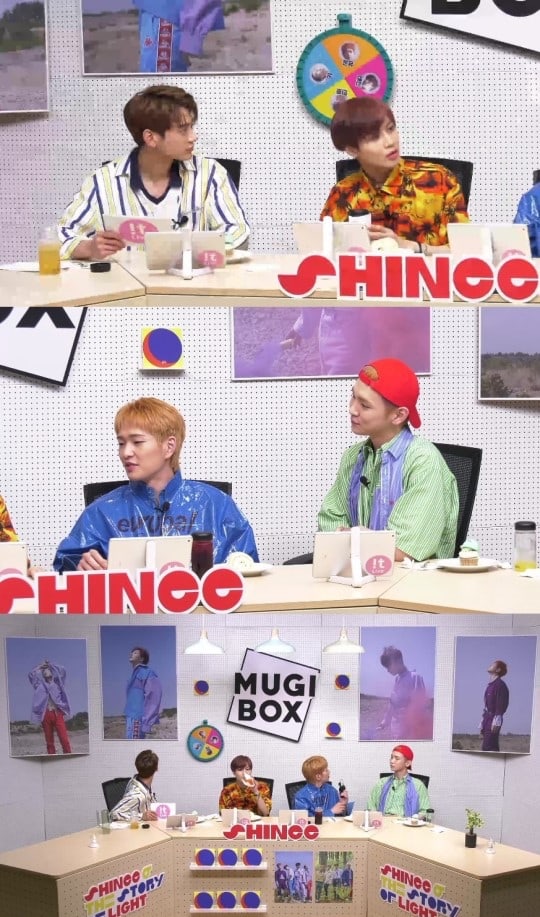 The members asked fans for their help in coming up with fun titles for their album jacket photos. About the photo that revealed a bit of Key’s stomach, Minho suggested, “Naju Pear Key.” They read their fans’ submissions and wrote their favorite ones on the photos.

SHINee also watched the “I Want You” MV together. Key said, “The filming wasn’t hard, but the filming with the wire and trampoline was a bit difficult.”

Minho added, “We filmed the wire scene where I fall back on top of a car in front of a chroma key. The people working the wires did a really good job, so it didn’t hurt at all and I think it came out well.”

The idols also answered questions. After he chose the question asking him about his first international trip, Taemin answered, “I went to Japan with EXO’s Kai and my friends. I remember the hot spring and resting. If given the chance, I want to go to other places.”

Revealing his jinx, Taemin explained, “When I wake up and have a bad feeling, then that day is ruined.”