The production staff of SBS’s “Wok of Love” recently talked about their drama’s unique love triangle.

Although the two male leads, played by 2PM’s Junho and Jang Hyuk, are in love with the same woman, Jung Ryeo Won, they also share a bromance that makes the relationship tangle more interesting. 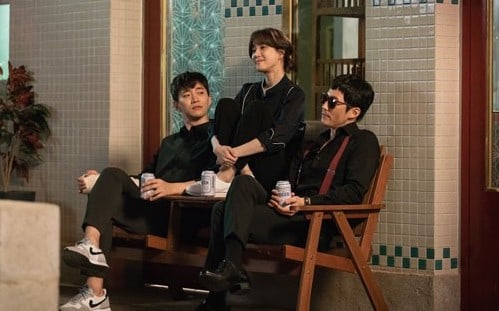 Seo Poong (Junho)’s confession to Jung Ryeo Won was itself out of the ordinary. When he discovered that Doo Chil Sung (Jang Hyuk) felt the same way as he did about Dan Se Woo (Jung Ryeo Won), he thought over it for a while. Unwilling to let go of his loyalty for Chil Sung, he told Se Woo, “I like you. But I also like [Chil Sung] just as much.”

Se Woo, however, is not a passive participant, waiting for the male characters to decide what’s best for her. She responded to Seo Poong’s confession with, “You can like him and me too. You can play us both. If you’re going to give up, why give up on me?” She then decided that she would follow her heart and go with the man that she wanted most.

Meanwhile, Doo Chil Sung also exhibited great depths of love and loyalty. He isn’t afraid to risk his life to help Seo Poong, and given his job, his affection for Se Woo is surprisingly naive and sweet. Even though Se Woo chooses someone else in the end, he takes care of her.

The production staff commented, “Whenever the three leads gather together for a scene, the atmosphere is particularly special. There are a lot of fun lines and scenes, and their chemistry is so good, that there’s a lot of laughter on set. Please look forward to how much better their chemistry will be onscreen.”

Watch the latest episode of “Wok of Love” on Viki: