On the June 13 episode, SHINee appeared on the idol variety program and did not hold back with their savage remarks.

Minho was sharing his thoughts on SHINee’s 10th anniversary when Taemin and Onew began to whisper. After Minho finished speaking, the MCs asked them about their conversation.

Touching Minho’s mustache, Taemin said, “You didn’t shave here very well.” Minho replied, “I’m talking about something heartfelt. Why are you talking about shaving? You didn’t shave well here either. We left for work this morning so it grows again when it’s night. Because of you, people who are watching the broadcast are now just going to look at my mustache.”

Holding up the plastic knife that came with their cake, Taemin joked, “Should I shave you with this?” and made everyone laugh. 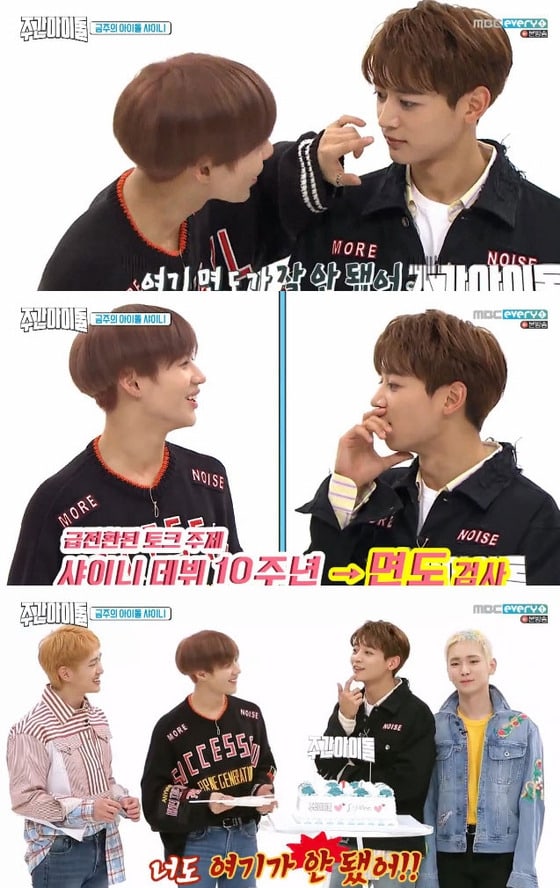 During one of the show’s segments where the members discussed their make-believe résumés, Taemin wrote that his strength is that he’s kind while his weakness is that he doesn’t have a good personality.

He explained, “There’s no middle ground. I’m hot-tempered, so I get angry quickly and apologize.”

They then took a look at what Taemin had written as thoughts in his brain and many of them involved Key, such as “block Key’s future,” and “annoy Key.”

“Key always makes fun of me and teases me,” said Taemin, before joking, “I want him to make him mess up on broadcast. He’s good at everything and is also good at being an MC. You know how even monkeys fall from trees too? I hope he messes up like that. Miserably.”

SHINee is currently promoting their newest title track “I Want You.”

SHINee
Key
Minho
Taemin
Weekly Idol
How does this article make you feel?