VIXX’s Ken will be playing Kim Joo Heon, who is a popular and beloved celebrity. Despite his fame and status, he is completely inept when it comes to dating and romantic relationships. Park Ji Bin will take the role of Tofu, a dog who magically transforms into a human, while model-turned-actress Kim Jin Kyung will be appearing as the lovable female lead Baek Min Kyung.

The three lead actors met up at iMBC in Sangam. Their shyness didn’t last long as they quickly immersed into the script. The production crew was impressed by the actors’ concentration during the script reading process, which lasted more than four hours. 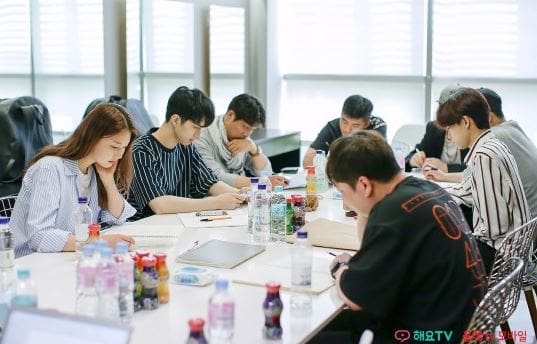 The production crew stated, “Park Ji Bin, VIXX’s Ken, Kim Jin Kyung, and the staff completed the script reading with success. [Through it], we were able to check the actors’ serious sides.”