MOMOLAND and actress Jo Bo Ah made a surprise appearance on the latest episode of “2 Days & 1 Night”!

On June 17, the show aired the final episode of “Jung Joon Young PD (Producing Director)’s Maknae Tour.” At dinnertime, the cast members played a game of random luck to decide who would have to go to the East Sea and who would get to enjoy delicious Japanese cuisine for dinner. Kim Joon Ho, Yoon Shi Yoon, and Cha Tae Hyun won, leaving Kim Jong Min and Defconn to go to the East Sea.

Kim Jong Min, Defconn, and Jung Joon Young then boarded a bus to head to the East Sea while the winning members enjoyed their dinner. On the bus, Jung Joon Young suddenly asked, “Why do we need to go all the way to the East Sea?” and the three members got off the bus and headed to a sashimi restaurant instead.

As soon as they entered the restaurant, MOMOLAND appeared while performing their hit song “BBoom BBoom.” Defconn and Kim Jong Min were shocked to see the girl group, and Jung Joon Young revealed that this was all a part of his original plan. 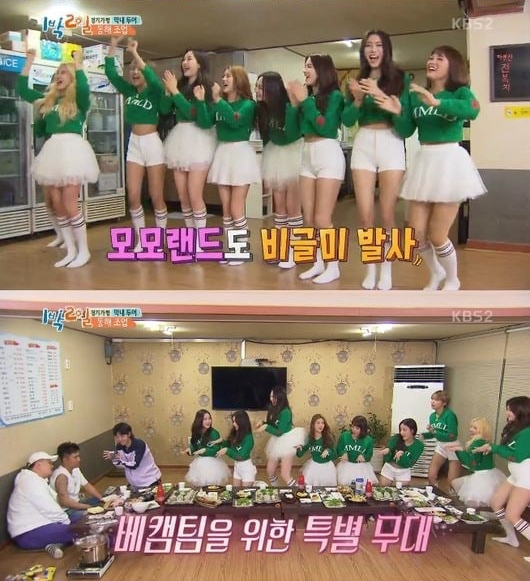 The cast later reunited at the base camp, where they played another game of random luck to decide their sleeping arrangements. Cha Tae Hyun, Yoon Shi Yoon, and Kim Jong Min ended up sleeping indoors, while Kim Joon Ho and Defconn tried to sleep in a swimming pool on top of pool floats. After playing around in the water, they both fell into the pool and ultimately wound up sleeping indoors as well.

The next morning, at Jung Joon Young’s instructions, Defconn headed to a rooftop where brunch awaited him. He was beginning to devour the food by himself when actress Jo Bo Ah suddenly appeared.

Defconn, who had previously mentioned that he was a fan of the actress, said, “I’m full even without eating,” and Jo Bo Ah told him, “Thank you for constantly mentioning me [on the show].”

The two continued their conversation until the other members joined them. Jo Bo Ah promised to appear on the show’s summer special and also partook in the signature game of choosing random drinks. Unfortunately, the actress chose a beverage with fermented anchovy sauce. 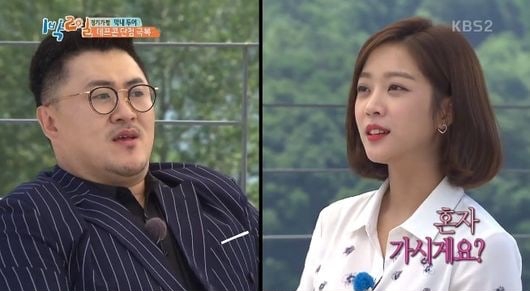 Jo Bo Ah also played the “ideal type world cup” and chose Jo In Sung as her ultimate ideal type. She sent the actor a video message and said she hoped to see him in a drama or movie soon.

Cha Tae Hyun then called Jo In Sung on his phone and told him that he was the winner of Jo Bo Ah’s “ideal type world cup.” After thanking the actress, Jo In Sung joked, “Maybe she picked me because my last name is Jo.” The two actors spoke briefly on the phone and said that they were both rooting for one another.