2PM’s Jun.K recently received an honorable mention in the military and shared a handwritten letter with his fans.

On June 18, a source from the military stated, “After the graduation ceremony of boot camp last week, Jun.K is currently fulfilling his military service. He was awarded the honor of the commander of the division for his outstanding overall score among the trainees.”

Fellow member Chansung proudly posted a photo of Jun.K with his award on the 2PM Instagram account.

Days before the award, Jun.K had posted a heartwarming letter dedicated to his fans through 2PM’s official fansite.

“Everyone, I think this will be the last letter I send to you from the training center! Tomorrow, on my seventh week in the military, I will finally be having a graduation ceremony. I am writing today’s fan letter on the stationary paper you guys made for me. It’s pretty!!

“I’m grateful for the letters, internet messages, and packages you guys send me every week. I was especially happy you guys told me news about the members and what is going on in the world!!

“More than anything, I am healthy and well. During the race of the second physical fitness assessment, I won third place and even did 111 sit-ups!! Again, gratefully enough, I will be receiving an award at tomorrow’s graduation. I got a silver medal for placing second place in the squadron. I did my best among the recruits who were born in 1998. I did well, didn’t I?

“During the talent show for ‘Recruiters’ Night’, I sang 2PM’s ‘Hands Up’, ’10 out of 10′, ‘I Hate You’, and ‘Only You’, and I was able to have fun with everyone’s encouragement. However, it was difficult doing [the stage] that the six of us did by myself. At the end, I saw the video you guys made me. I was embarrassed… but grateful.

“Even at the military base, I will make sure to be healthy and write to you guys often! By the way, my squadron won first place during the rifle test, zeroing fire, and record firing, so we got the prize of being able to go to the PX [base military store]. So I got to eat crackers, chocolate, and ice cream for 30 minutes.

“Once again, I’d like to thank the recruiters at the 18-6 second square division who followed me well and the fans who sent me big strength through their letters. My members sent me letters as well. Junho and Taecyeon sent them three times. Wooyoung as well. And Chansung, I’ll… understand… you since you’re so busy. Nichkhun, you’re abroad, so I’ll… understand… the fact that you can’t even if you want to. Anyways, I really miss you guys!!

“Everyone, it’s getting extremely hot now. Be careful of the heat and always be healthy. I suddenly really want to eat watermelon. Long time ago, when I was filming my solo music video, Nickhun brought sliced watermelon. I want to go to Thailand and buy him watermelon juice.

“Even right now as I’m writing this letter, it’s so hot. I don’t know when you guys will be able to read this letter, but I’ll be healthy even in the military base, so don’t worry and wait for me!! I’ll write to you guys again. I love you guys each and every day. Thank you for the time at the training center.” 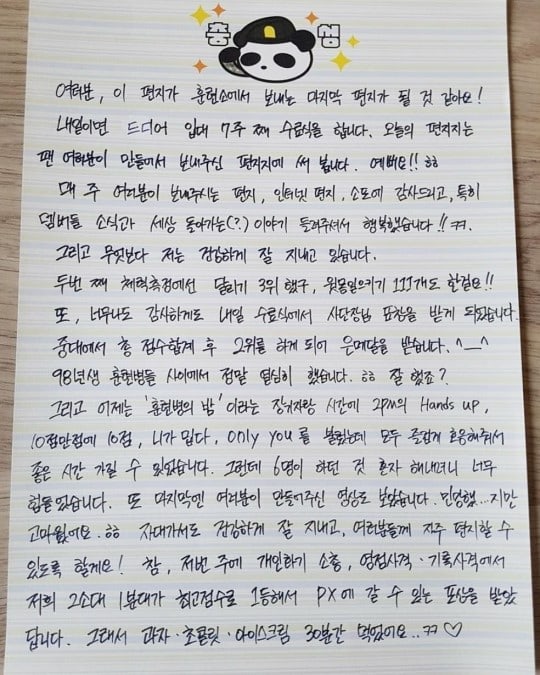 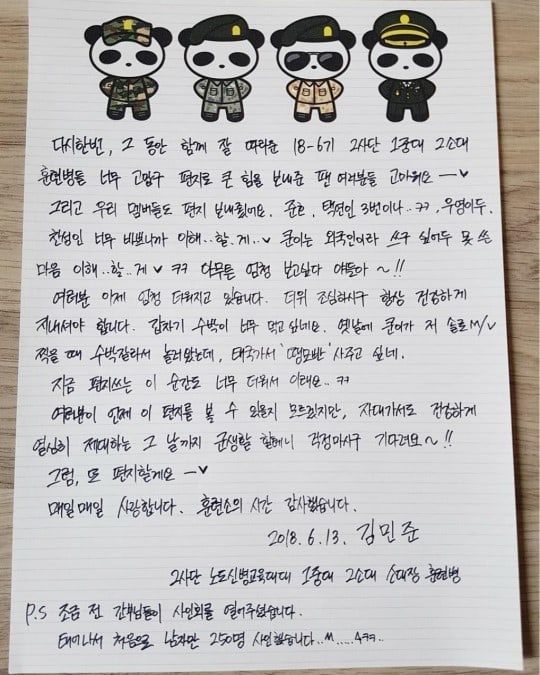 Earlier this month, Jun.K was rumored to be suffering from facial nerve paralysis in the military, and JYP Entertainment issued an explanation of it.