Though now veteran idols, BTOB said that they weren’t without nerves: “There was a gap between us finishing work on the album and its release, and we were really nervous. We hope that this one is loved as much as our previous album ‘Missing You.’”

The members said, “Hyunsik was writing the song, and as the release date came closer and closer, his expression became darker.” Hyunsik said, “I was nervous and I couldn’t sleep. I just kept zoning out.”

On the success of their pre-release track “The Feeling,” the BTOB members said they feel they are seeing the fruits of their hard work, and on the rest of the album, said, “We’re really happy with all of the songs on our album.” Hyunsik added, “I was really happy when I heard someone say, ‘Now their genre is BTOB.’” said Hyunsik.

“Only One For Me,” the title track on BTOB’s latest mini album, is another collaboration between Hyunsik and Eden, who also worked together to create BTOB’s “Missing You.” “Only One For Me” is like an extension of “Missing You”; at first it was just a feeling of longing, and now it’s a confession that there can be no one else, BTOB explained.

When asked if there’s anything that they can’t live without, like the song “Only One For Me” describes, Ilhoon said, “I can’t live without Eunkwang.” Eunkwang responded, “Did you think at all before responding?” 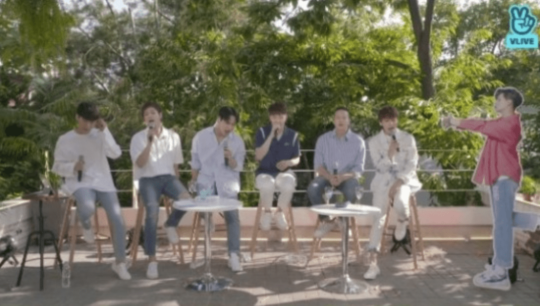