Lee Dong Wook has transformed into a sharp doctor for “Life.”

In the character poster, Lee Dong Wook’s aura is accented by his crossed arms and serious expression. The caption mysteriously reads, “I saw the blood spill.” 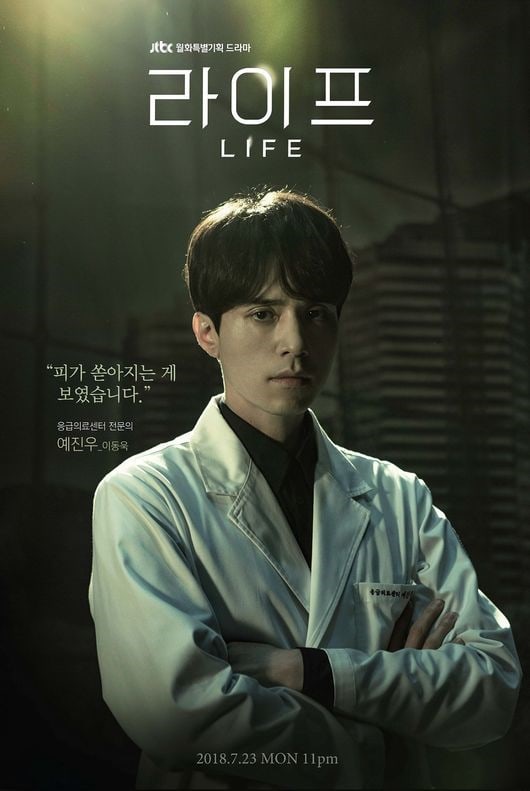 Lee Dong Wook’s character Ye Jin Woo is the head physician of Sang Gook University Hospital’s emergency care center. Though he is closed off and doesn’t seem to care about the comings and goings of the hospital, but he has a very strong sense of the path a doctor is supposed to take.

The drama will be Lee Dong Wook’s drama comeback in a year since his role in hit drama “Goblin.” On his character, he commented, “Ye Jin Woo is a character that goes through a lot of complicated inner change. However, he doesn’t outwardly convey his emotions, thoughts, actions, and reasons. The more viewers will wonder, ‘What is Jin Woo thinking?’ and ‘What is Jin Woo’s reasons and end goal in acting this way?’ the more I will be working hard to not make him seem like a flat character.” He continued, “I will repay viewers just as much as they’ve waited with a good project and am doing my best while filming. Please look forward to it.”

The drama production staff stated, “Lee Dong Wook has perfectly immersed himself into his character and is now Ye Jin Woo. He has interpreted the drama as well as the character in detail. Lee Dong Wook will show the true value of the drama and viewers will see new charms of the actor.”

“Life” will air its first episode on July 23.