Son Ji Hyun (formerly known as Nam Ji Hyun) recently opened up about 4minute’s disbandment and her acting career in an interview with @star1 magazine.

The actress formerly promoted under the name Nam Ji Hyun as 4Minute’s leader for seven years. After the group’s disbandment, she changed her name and began promoting as rookie actress Son Ji Hyun instead, taking on her mother’s surname.

She remarked, “The year after 4Minute disbanded, it was really hard. I was afraid to meet people, so for a month, I didn’t leave the house. The thought that seven years had vanished in a single moment made me feel empty, but I pulled myself together by thinking, ‘I’m a 4Minute member and Ji Hyun.'”

When asked if she missed performing on stage, she answered, “When I was a singer, I truly loved the stage. But I received a lot of love during those seven years and made a lot of precious memories, so I have no lingering regrets.” She laughed and added, “I do have a lot of energy, though, so I release it all when I go karaoke.”

Son Ji Hyun picked Jung Ryeo Won and Seo Hyun Jin as her role models, since they both succeeded in their acting careers after starting out as singers. She explained, “I ended up observing them a lot because they traveled a similar path to mine. Seeing actresses who debuted in girl groups like Seo Hyun Jin and Jung Ryeo Won gives me confidence that I can do [what they did] too.” 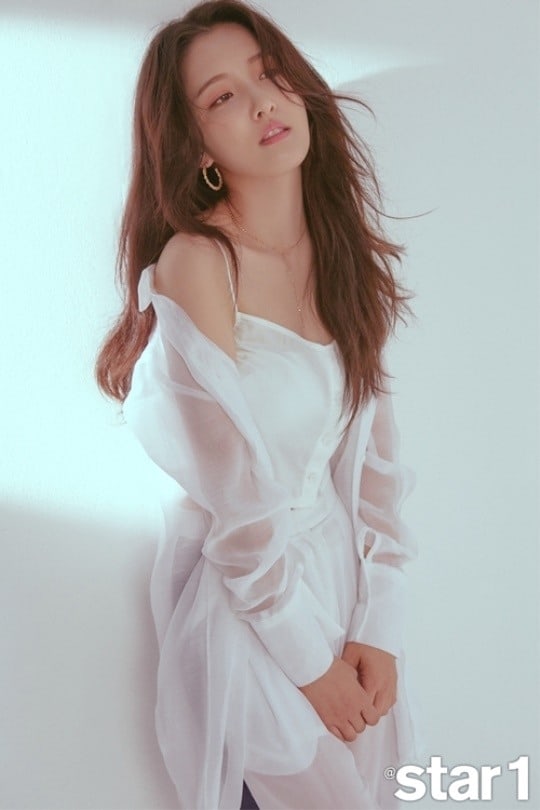 Son Ji Hyun recently appeared in “Grand Prince” and gained attention for playing the wild, mud-smeared character Roo Si Gae. The actress commented, “After I changed my career to acting, I no longer have the desire to look pretty. Of course, looking pretty is good, but I found characters with a beautiful vibe much more appealing than characters who look beautiful on the outside.”

She added, “I wasn’t satisfied with my acting, but it was edited well, and so the story flowed smoothly. The advice that Yoon Shi Yoon gave me throughout the drama was a great source of strength for me. He’s a senior that took care of all the actors really well. He gave us a lot of advice and made the filming atmosphere fun.”

As for her future plans, she shared, “After the conclusion of ‘Grand Prince,’ I’ve been going to auditions. I audition for any roles I can, but I’m especially excited when I audition for characters with professional careers. I think smart, career woman roles like Go Sung Hee‘s and Chae Jung An‘s in ‘Suits’ are really cool.”

Son Ji Hyun continued, “I’ll be 30 years old soon, so I want to become more mature. Before I turn 30, I want to act in another good project. After ‘Grand Prince,’ I’ve been taking a lot of acting lessons. In order to stay fit, I’ve stopped eating ramen and have been working out. I’ll work hard to show a better side of myself.”

If you haven’t already, watch Son Ji Hyun in the first episode of “Grand Prince” below!