The kiss is a special moment that many K-drama fanatics look forward to seeing. Sometimes a nice simple kiss scene is enough to satisfy viewers, but other times, there are some unique and quirky ways that a kiss scene comes about. Here’s a look at 12 of those kiss concepts!

In “Pinocchio,” Ha Myung (Lee Jong Suk), who lost his family at a young age, gets adopted by In Ha (Park Shin Hye)’s grandfather. They live together throughout their high school and university years and it’s pretty obvious that the two share an intense chemistry. There are some almost kisses throughout the series, but this one in particular is pretty quirky:

Although it is just a part of the father’s imagination, it is still pretty hilarious seeing how sensual this “kiss” is with the piece of bread in between them. Definitely a unique concept, right?

“Drinking Solo” stars Ha Seok Jin as Jin Jung Suk and Park Ha Sun as Park Ha Na. It depicts the drinking and working lifestyle within Korean culture. There’s some sparks between Jung Suk and Ha Na as they are both teachers at a private academy. The anticipation leading up to their kiss scene had a quirky concept as it involved them “accidentally” locking lips while watching fireworks.

Lee Sang Yoon and Lee Sung Kyung play lovers who are in a race against time. Choi Michaela (Lee Sung Kyung) does not have much time left to live and Lee Do Ha (Lee Sang Yoon) seems to be the key to her living longer. Their intense chemistry and tension is what makes the anticipation to this “kiss” too exciting.

The food-themed kiss scenes seem to be a popular concept in K-dramas. This one was SO close in terms of the two having full lip contact! Can you feel the intense chemistry?

I guess a lot of the quirky K-drama kiss scenes involve food. In “Bubblegum,” Lee Dong Wook stars as an oriental medicinal doctor named Park Ri Hwan who has a childhood best friend named Kim Haeng-Ah, played by Jung Ryeo Won. They both have feelings for each other, but there are some obstacles in the way that are preventing them from being with each other. This adorable bubblegum kiss scene is pretty epic as it is a long-awaited moment. The bubblegum provides a unique touch to these two lovebirds.

First she has the gum.

And now he does.

This is one of my favorite kiss scenes of all time. The only aspect that is a bit unique/quirky about this particular kiss scene is the fact that Chae Young Shin (Park Min Young) has never met or seen Seo Jung Hoo (Ji Chang Wook). It’s a little weird to be sharing such an intimate act with a complete stranger, isn’t it?

Catch the first episode of “Healer”:

“Secret Garden” really made this particular kiss scene famous. It stood the test of time as it became the subject of parody for many years now. This series involves a stunt-woman named Gil Ra Im (Ha Ji Won) and a rich CEO named Kim Joo Won (Hyun Bin). Joo Won is trying to pursue Ra Im and follows her into this cafe where she is drinking her beverage. Just when she’s ready to tell him off, he notices that she has foam on her lips, so he leans in and kisses her.

Lee Gun (Jang Hyuk) and Kim Mi Young (Jang Nara) have a rollercoaster of a relationship. Although they get married and divorced all within the first few episodes, their feelings for each other never fade. When they meet again later on in the series, the chemistry and fire between the two is so evident. Although this scene isn’t necessarily that quirky, it does progress pretty quickly and is still an interesting way to kiss!

8. Chest kiss from “All About My Romance”

This is a kiss concept that is definitely pretty unique and quirky in the K-drama world. “All About My Romance” involves Kim Soo Young (Shin Ha Kyun), a member of the government, and No Min Young (Lee Min Jung), a member of another part of the government, butting heads. But then it starts to progress into some serious feelings. In one particular scene, as Min Young is about to fall down the stairs, she grabs onto Soo Young’s shirt. His buttons all rip down his shirt and he grabs her head, causing her to kiss his chest. Pretty quirky concept, right? It’s not exactly the most ideal kiss situation! 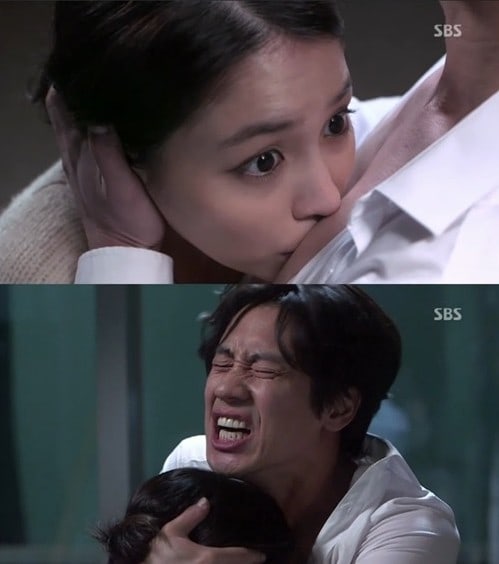 Catch the first episode of “All About My Romance”:

This sweet and innocent kiss scene also involves bubblegum. Kim Sae Ron stars in this drama as an angel named Lee Seul Bi who becomes a human. There is a sweet love line between her character and Shin Woo Hyun (INFINITE’s Woohyun) whom she saves.

Although the kiss didn’t have direct contact on the lips, it is definitely a creative way to portray their feelings for each other!

Catch the first episode of “Hi! School – Love On”:

This kiss concept is more funny and ridiculous than anything. It’s hilarious how Cha Yoon Seo (Kim Jaekyung) just so happens to fall directly onto Lee Kang Hoon (Sung Hoon)’s lips, but it’s definitely a concept that we can dig as long as it means the two are falling in love with each other.

A “kite kiss” is definitely a first in K-drama world. No Min Woo and Yang Jin Sung respectively star as two complete opposites named Yoon Tae Woon and Yoo Ji Na, who end up falling in love with each other. During this kiss scene, when Tae Woon sees that a kite is stuck in a tree, he climbs up to get it. Ji Na tries to help him down, but he stumbles and draws closer to her face. While dangling from the tree like a monkey, he leans in for a kiss. It’s definitely a one-of-a-kind concept!

Catch the first episode of “My Unfortunate Boyfriend”:

As this list is all about unique kiss concepts, the memorable “candy kiss” from Iris definitely can’t go without being mentioned. Lee Byung Hun and Kim Tae Hee star in this epic journey about two lovers who are forced apart but bound by love. They share this unique kiss with each other, and it’s become a classic kiss scene. Regardless of it being unique and quirky, it’s definitely romantic, isn’t it?!

Catch the first episode of “IRIS”

Hey Soompiers, which of these quirky and unique kiss concepts is your favorite? Let me know in the comments below!

Soompi Spotlight
Fated to Love You
Hi! School – Love On
Healer
My Unfortunate Boyfriend
Bubblegum
IRIS
Secret Garden
Pinocchio
All About My Romance
Drinking Solo
About Time
noble my love
How does this article make you feel?