Gallup Korea conducted a survey from June 19 to 21 asking 1,003 Koreans aged 19 years and above which TV show they enjoy the most these days. Each participant could choose up to two shows.

“I Live Alone” came out on top once again with votes from 5 percent of the participants, marking its third month in a row to be ranked as the most popular TV show. Having begun in March 2013, “I Live Alone” is a variety show that shows the honest lives of celebrities who live by themselves. The show first entered the chart in August 2017 and has been slowly making its way up, finally topping the list in April 2018. It has been keeping its No. 1 spot since.

Besides the World Cup coverage, new entries in the top 20 included tvN drama “What’s Wrong with Secretary Kim” at No. 6, JTBC drama “Miss Hammurabi” at No. 13, and KBS1 drama “Sunny Again Tomorrow” at No. 17.

Check out the full list of the top 20 below: 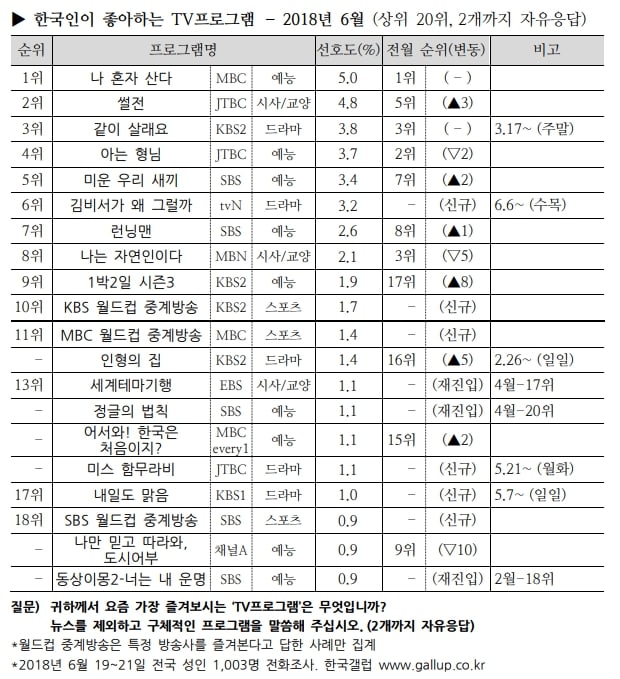 Law of the Jungle
2 Days &amp; 1 Night
Ask Us Anything
Running Man
Home Alone
Ssulzun
My Ugly Duckling
Same Bed Different Dreams 2 – You Are My Destiny
Miss Hammurabi
Marry Me Now
What's Wrong with Secretary Kim
How does this article make you feel?