NCT 127 Talks About What Their Popularity Was Like In School

The SM boy group was the first performer of the new show and surprised a school in Jeonju.

When asked what their popularity was like when they were in school, the boys modestly replied they were all very timid. Then Taeil pointed to Doyoung and reported, “He’s one of Guri’s top six [popular people].” Doyoung laughed in disbelief, and all eyes became focused on him.

SECHSKIES’s Eun Ji Won asked if he had given that nickname to himself or if someone else had labeled him that, and Taeil quipped, “Himself. Ever since his trainee days.” Doyoung denied it with wide eyes and stood up to demand, “What’s wrong with you? He’s exaggerating since he’s on TV!”

To top it off, Johnny claimed, “[Doyoung] was the vice president of his school.” Doyoung quietly admitted that much was true.

Eun Ji Won asked if he knew the other top popular students as well, and this time, Doyoung shamelessly replied, “Actually, I’m the top one.” Hosts Eun Ji Won and Highlight’s Son Dong Woon looked both envious and amazed by his popularity. 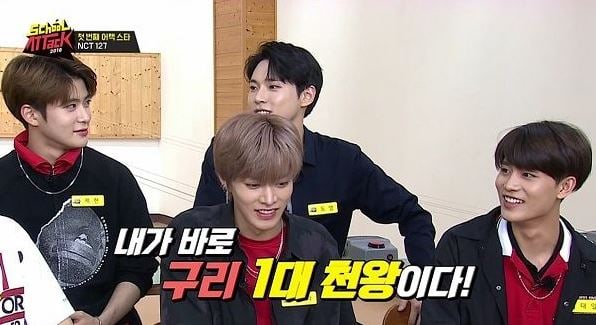