On June 28, Gaon Chart revealed its chart rankings for the week of June 17 to 23. Not only did BLACKPINK manage to top four different charts this week, but the group also achieved the highest score of the year on the overall digital chart (85,411,467) with their latest hit “DDU-DU DDU-DU.”

BLACKPINK took No. 1 on the weekly physical album chart, overall digital chart, download chart, and streaming chart, while BTS continued their reign at the top of the social chart for the sixth consecutive week.

Congratulations to BLACKPINK on their impressive achievement!

In addition to their record-breaking No. 1 on the overall digital chart with “DDU-DU DDU-DU,” BLACKPINK also claimed the No. 2 spot with their new B-side “Forever Young.” Bolbbalgan4 followed at No. 3 with “Travel,” while BTOB’s new title track “Only One for Me” debuted at No. 4 on the chart, and BTS’s “Fake Love” rounded out the top five. 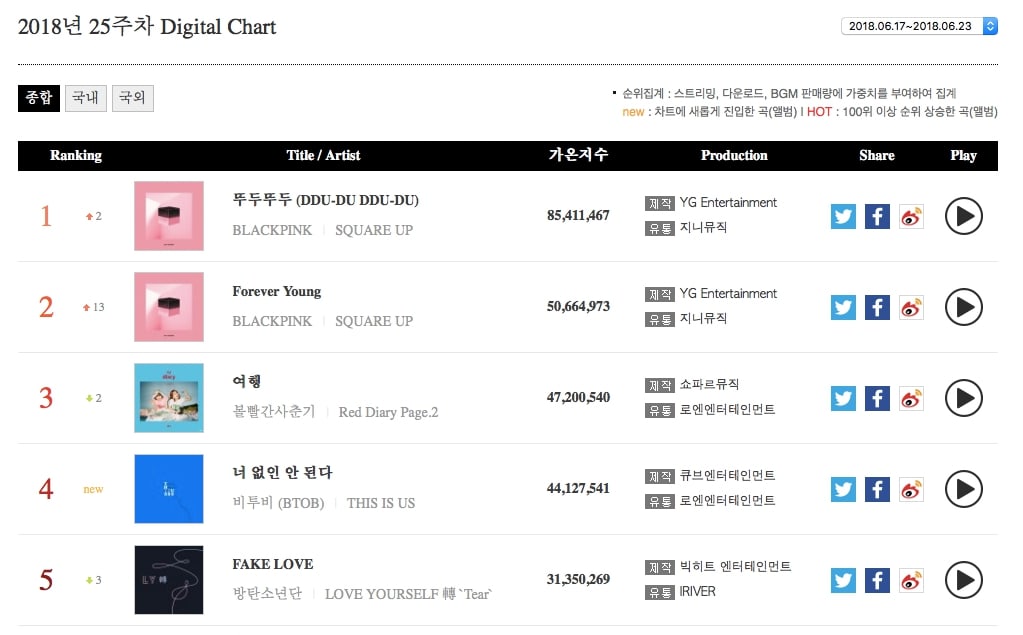 BLACKPINK took both No. 1 and No. 3 on the download chart with “DDU-DU DDU-DU” and “Forever Young” respectively, while BTOB came in at No. 2 with “Only One for Me.” Taeyeon’s new solo track “Something New” debuted at No. 4, with Bolbbalgan4’s “Travel” trailing at No. 5. 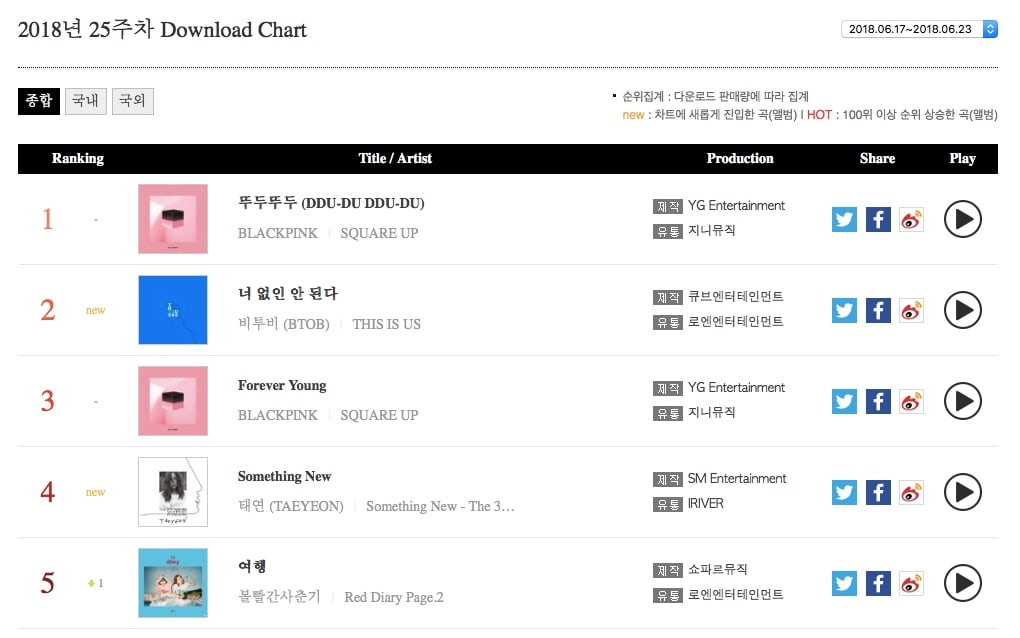 BLACKPINK also took both No. 1 and No. 3 on the streaming chart this week. Bolbbalgan4’s “Travel” fell one spot to No. 2, with BTS’s “Fake Love” and AOA’s “Bingle Bangle” at No. 4 and No. 5 on the chart respectively. 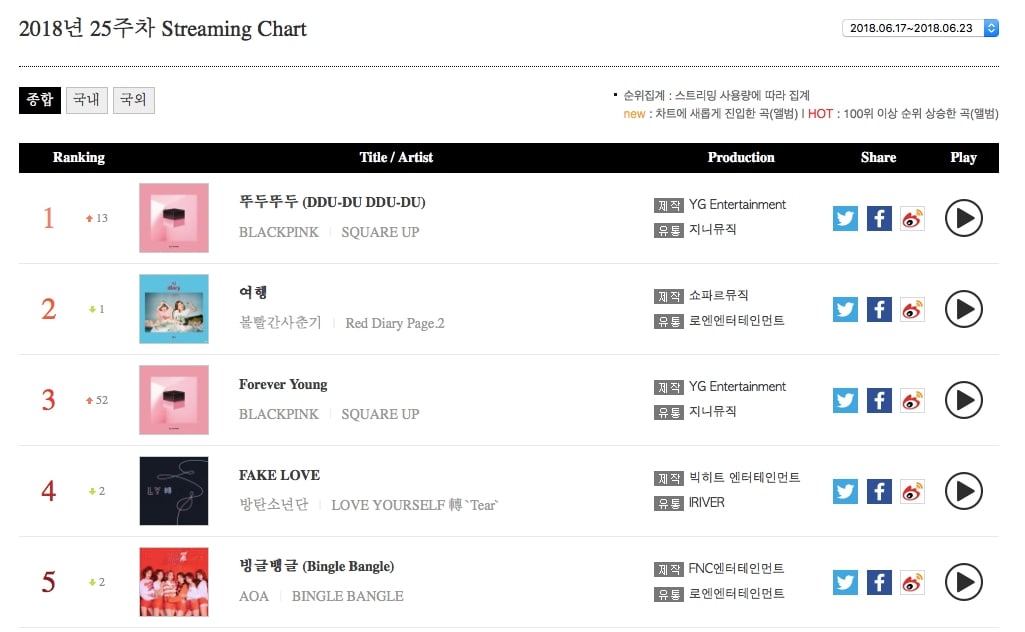 The physical album chart was dominated by new releases this week. BLACKPINK’s “Square Up,” BTOB’s “This Is Us,” Taeyeon’s “Something New,” and Kim Dong Han’s “D-DAY” all debuted on the chart this week at No. 1, 2, 3, and 5 respectively, while BTS’s “Love Yourself: Tear” maintained its position at No. 4. 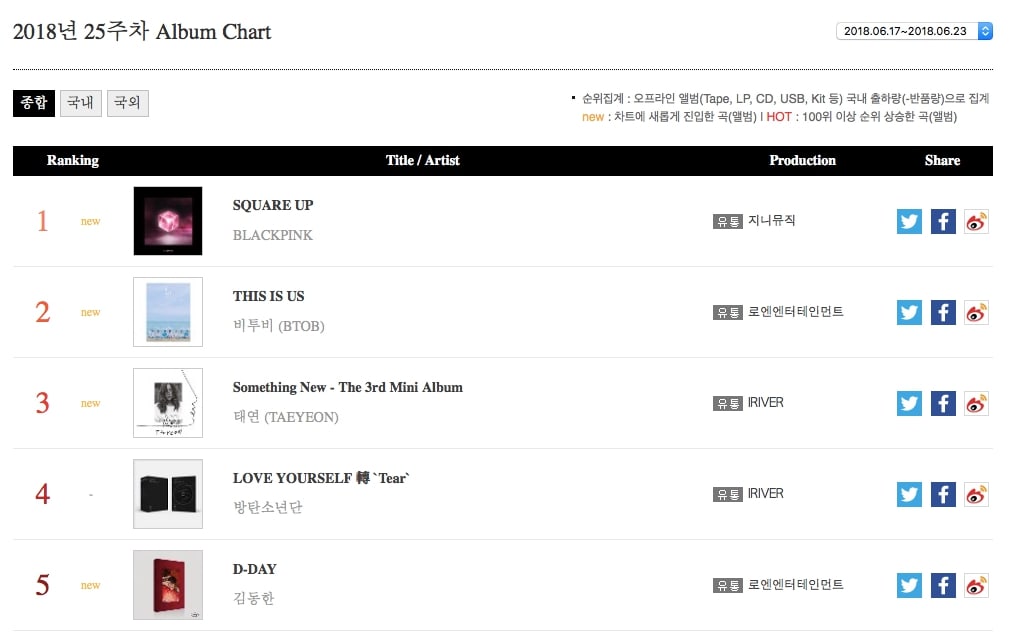 BTS’s “Fake Love” held onto the No. 1 spot on the social chart for the sixth week in a row, followed by Taeyeon’s “Something New” at No. 2. MOMOLAND’s “BBoom BBoom” came in at No. 3 this week, while BTS’s “DNA” and TWICE’s “What is Love?” remained at No. 4 and No. 5 respectively. 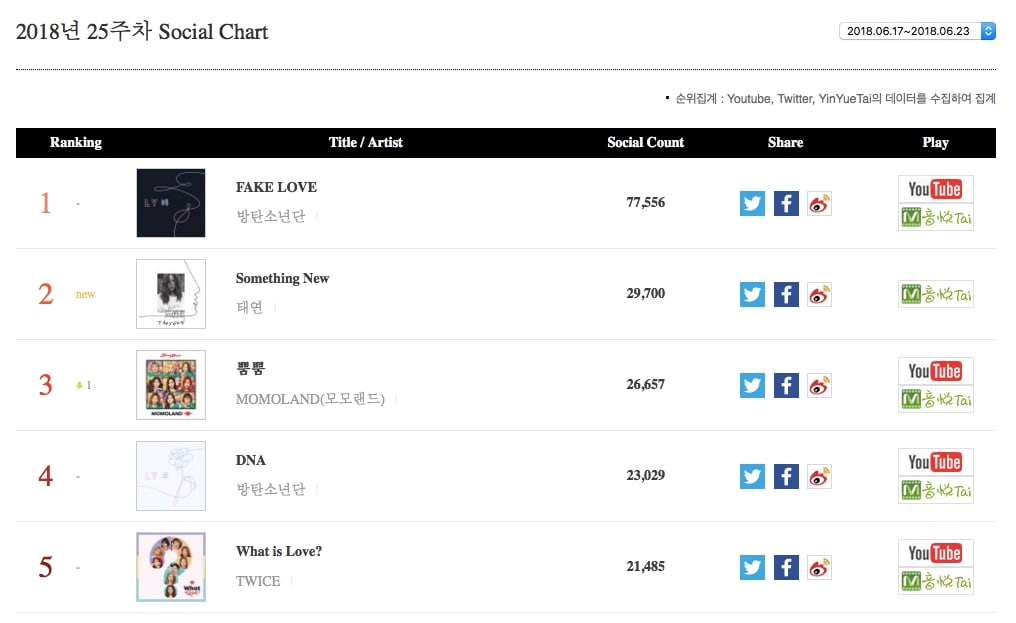