June 28, SM Entertainment executive producer Lee Soo Man was awarded the Best Management Award at the 2018 Korea-China Management Awards, recognized for his leading roles in the globalization of Korean culture and the success of K-pop. SM boy group NCT 127 also received the award for Asia’s Rising Star, and NCT members Taeyong and WinWin were in attendance to accept the award. 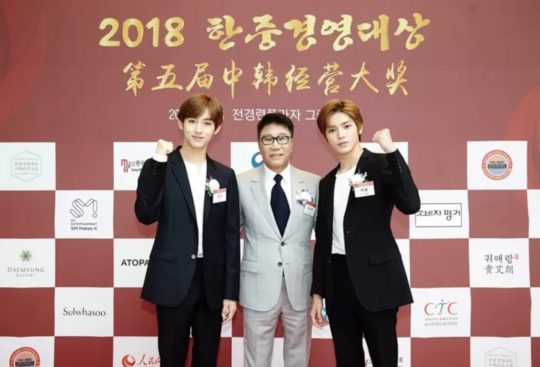 A source from the Korea-China Management Awards said, “We chose producer Lee Soo Man for this year’s award for his role in making Korean culture known around the world and not just one-sidedly marketing K-pop internationally, but taking into account local cultures and making K-pop a tool of mutual communication, regardless of nationality.”

Lee Soo Man said, “Our content and celebrities have synergy in collaboration with China, and our direction is founded in the thought that with this synergy, we must lead not only Asia, but the world market. I believe that moving forward, if Korea, China, and other Asian countries work together, we can make Asia the capital of the cultural industry, where our celebrities and content lead world trends. Looking at it this way, this is a time when we desperately need cultural cooperation and fusion among Asian countries.”

He continued, “SM aims to create a joint Korean-Chinese culture that rivals that of any in the world. I’ll accept this award as an encouragement to strengthen bridges between Korea and China and to lead Asian culture across the globe, and will work even harder to achieve these goals.”

Revealing future plans for NCT, Lee Soo Man said, “We’re preparing the debut of a Chinese unit of NCT made up of the group’s Chinese members, so please look forward to NCT on the global stage.”