Watch: Super Junior Tests Their Talents Against Oh My Girl In “Super TV 2”

Super Junior went head-to-head with Oh My Girl on the June 28 broadcast of XtvN’s “Super TV 2,” Oh My Girl competing for Korean premium beef, and Super Junior for a trip.

In the first game, the Super Junior and Oh My Girl members had to say a portion of the lyrics to Outsider’s “Bye U” in under 10 seconds.

After a string of failed attempts on both sides by Eunhyuk, Mimi, Jiho, Heechul, and Hyojung, Super Junior’s Choi Siwon completed the challenge with ease in 9.97 seconds. 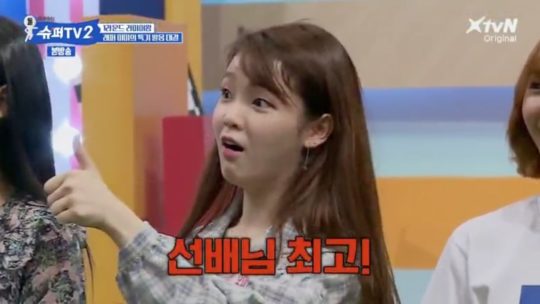 The two groups then engaged in a high note challenge, seeing whose voices could go higher. Going up against Choi Siwon was Oh My Girl’s Seunghee, who, at one point, surprised Choi Siwon — and the Oh My Girl members — so much with her high pitch that Siwon called for Ryeowook. In the end, Seunghee emerged victorious.

The next game was a touch game. Oh My Girl member Arin’s special talent that she put on her profile was her sensitive touch; she claimed that just by holding the Oh My Girl members’ hands, she could identify who was who.

Arin chose Shindong as her opponent for the game. Shindong, who said he has never grabbed the Super Junior members’ hands before, shook everyone’s hands once in preparation for the game, after which they put on their blindfolds.

Arin had been extremely confident before beginning the game, but only ended up matching six out of ten correctly, either by saying the name of the member or declaring that the person in front of her was not a member of Oh My Girl.

Shindong, who kept saying that he had no idea before the start of the game, floored everyone when he got a perfect score, matching all ten correctly to win the game.

Oh My Girl
Super Junior
Super TV 2
How does this article make you feel?