Web dramas are usually known for being light, short, and moderately cheesy. But one thing is for sure, we absolutely love every bit of it! Watching these shorter dramas can help us take a break from the usual overwhelming plots that we go through when watching lengthy storylines, and sometimes, we simply don’t feel like going through a nerve-wrecking rollercoaster ride of emotions. Instead, we don’t mind a short, bed time visual story for a change.

Set in the chronological order of their release, here is a selection of web dramas that you should indulge in this summer after watching an intense drama! 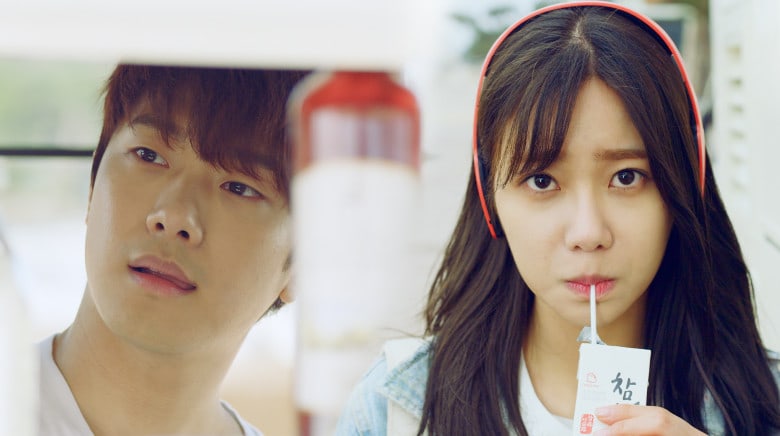 In this drama, Min Joon (Choi Min Hwan) is an aspiring chef with big dreams who runs a food truck business in hopes of creating a new food trend. On a slow work day, he happens to come across a troublesome graffiti artist named Joon Young (AOA’s Yuna), who offers her services to help around to pay back for her free meal.

Joining forces with her employer, Yoon Young uses her witty skills to lure potential clients to try the place’s signature dish while Min Joon’s mind is preoccupied with an upcoming yearly chef competition. And with his ex-girlfriend being the previous recipient, he puts all of his focus on the contest in order to prove himself. However, a drastic incident shifts his interest into what he believes is what truly matters at the moment.

Hot, sweet, and heart melting, this web drama is different from the usual rushed plots we’re used to that instantly build up a love sparkle. Instead, a more realistic, slow-burn romance sees the light of day between the ambitious chef and his carefree helper as they open each other’s eyes to what life is really all about. 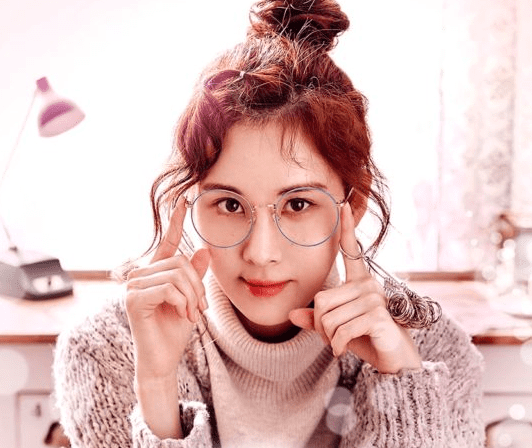 Girls’ Generation’s Seohyun plays the role of Ruby, a distinguished jewelry designer who suffers from sociophobia. Upon receiving a magical ring, her life turns upside down as her new power grants her the possibility to overcome her fears and righteously claim her well-deserved Daesang award. Plus, Ruby’s new social venture actually allows her to get close to her prince charming, Na Ji Suk (Lee Yi Kyung), the CEO of a jewelry enterprise. But Ji Suk is not the only man in Ruby’s life. In fact, her one and only friend named Won Suk (Lee Chul Woo) also keeps an eye on her behind the curtains, waiting for her to notice him one day.

This lighthearted story not only shows Ruby’s impressive development but also the development of her love life. Ruby grows as she learns that willpower really comes from inner strength and the faith her entourage has in her, and she realizes that she’s loved for being herself rather than for leaving her comfort zone to please others.

Her bubbly persona is enough to make both male characters fall heads over heels for her, and the heart fluttering exchange Ruby has with both of them will make you anxious to find out who she ends up with at the end. One thing is for sure, her final pick is definitely worth the wait! 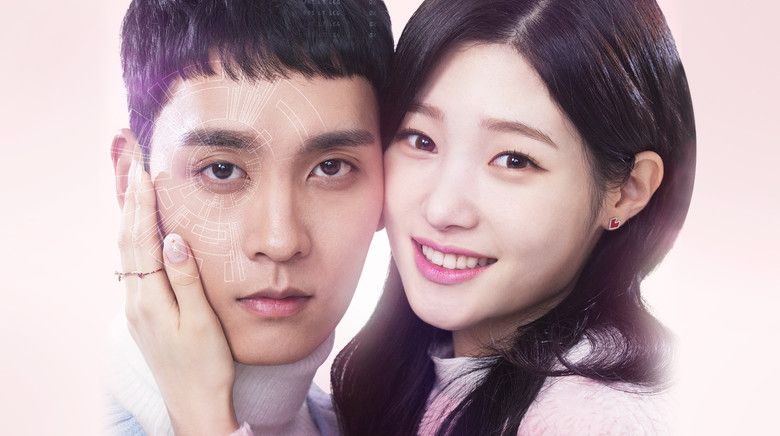 “109 Strange Things” tells the story of KDI-109 (Choi Tae Joon), a robot from the future who lands near the home of Shin Ki Won (DIA’s Jung Chae Yeon), a struggling liberal arts student who is trying to make a career path for herself prior to her graduation.

KDI-109, who is on a mission to protect Ki Won, does everything in his power to keep her safe. His role is deemed vital, considering the misfortune that seems to be surrounding her. On top of that, danger and mystery keep hunting KDI-109 because of a group of villains who are adamant to destroy him. As KDI-109 spends more time with Ki Won and gets acquainted with her family members, his newly warm life allows him to start developing all sorts of human feelings such as happiness, sense of humor, and ultimately being in love.

The plot mainly evokes philosophical questions regarding free will, expressing emotions, and the whole “job vs. experience” dilemma. Although the questions are left unanswered directly, we can still guess the respective responses as the story progresses. Plus, the cute love story that emerges between KDI-109 and Ki Won makes up for it.

Queen of the Ring 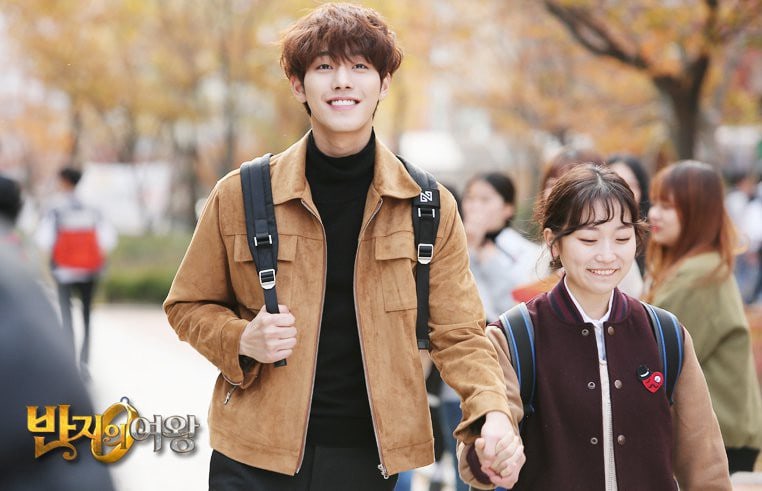 In this cute drama, Mo Nan Hee (Kim Seul Gi) is a hopeless romantic who lacks confidence in her looks, and who has a huge crush on Park Se Gun (Ahn Hyo Seop), a vain guy from her school who only cares about physical beauty. Her crush soon turns into a vindictive pursuit where she attempts to win him over. To do so, she resorts to a mystical family heirloom in the form of a ring that makes him fall for her the second he puts it on her finger.

Satisfied with her successful plan at first, Nan Hee suddenly finds herself trapped when the ugly truth is revealed, putting her relationship in jeopardy and hurting them both in the process. However, an exciting switch of fate takes place as Nan Hee develops interest in Se Gun’s field. With both characters being art major students, a fashion design competition brings the pair closer despite their ongoing quarrel.

The main leads’ chemistry is amazing, and we can’t get enough of it! Also, the drama teaches some important life lessons, such as being loyal to the people we care about, and what real beauty truly stands for, making it worth the watch. 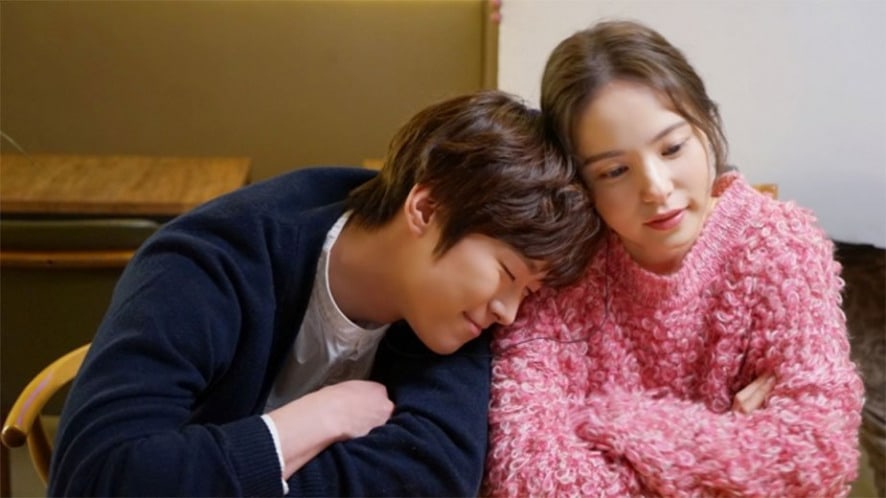 In this drama, Na Ji Young (Min Hyo Rin) and Park Byuk Soo (Gong Myung) are two neighbors who happen to be stuck in opposite sides of their respective social lives. Ji Young is an autonomous introvert who lives in her own bubble due to being neglected by her parents in the past. On the flip side, Byuk Soo is an active socializer who can’t stand the thought of being left out. Be it at work, in his love life, or even on social media, being part of a social circle is a must in his life. The two opposites cross paths in the most peculiar ways, and on a lonesome Christmas’ eve, they open up to one another, thus initiating a very interesting love story with its own share of hardships.

The creation of a push-pull situation between these two shows us that while there is certain happiness in being alone, there is also palpable comfort in keeping each other company. You can see this in the relationship between the complicated lovers, with Ji Young trying her best to stop secluding herself and focusing on letting her partner into her life, while Byuk Soo becomes more understanding her concerns and makes her well-being a priority over their relationship. 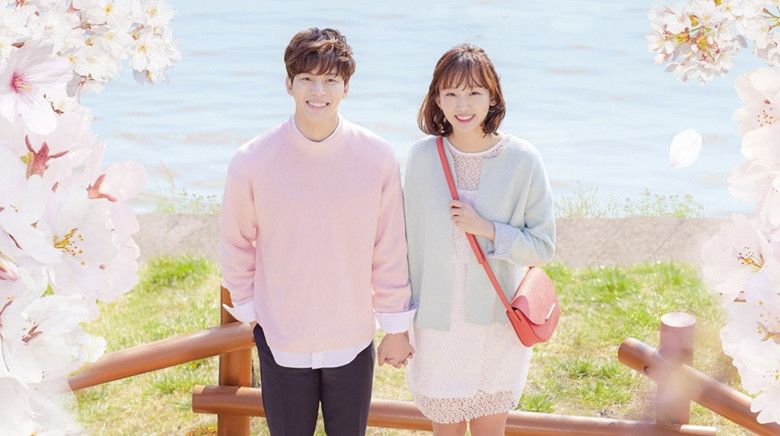 This drama starts off with the idea that a woman’s appearance tends to be the worst every Wednesday at 3:30 p.m. because it allegedly marks the peak of stress that piles up since the beginning of the week. Unfortunately for Sun Eun Woo (Jin Ki Joo), that is the exact moment that her boyfriend Baek Seung Gyu (Ahn Bo Hyun) breaks up with her.

Upon leaving the cafe where she is dumped, she runs into her childhood buddy, Yoon Jae Won (VIXX’s Lee Hong Bin), whom she hasn’t seen in years. The old friends catch up about their respective lives, and Eun Woo discloses her recent heartbreak while Jae Won mentions that he is the temporary manager of a cafe, which he loses later in a sudden fire. He ends up seeking shelter at Eun Woo’s place, and in return, he promises to reunite her with her ex-boyfriend via an Instagram love project.

Amidst the fruitful project, Eun Woo and Jae Won’s friendship is put to the test as they each aim to retrieve what was once lost. One of the most heartwarming parts of the story is how these long-time friends both start thinking about their own love lines, and whether they should come forward and confess their feelings or respect each other’s private lives. 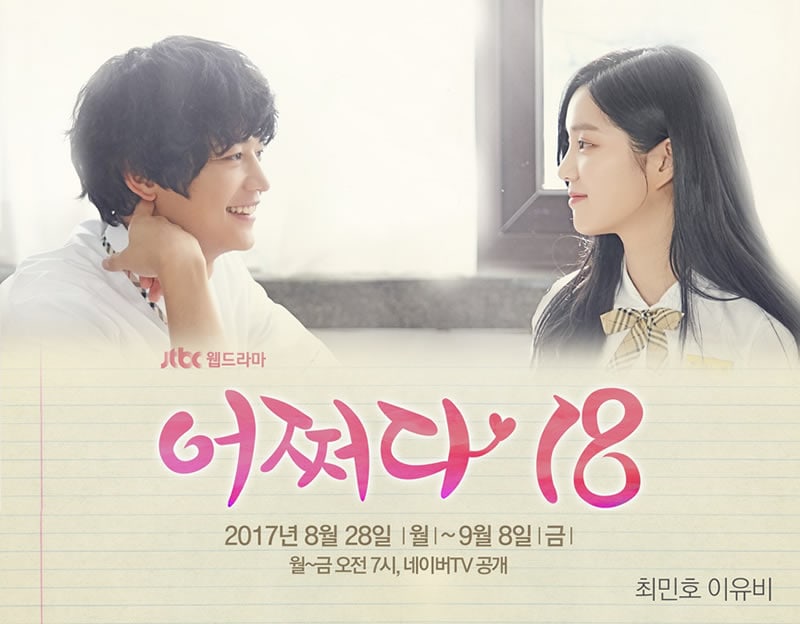 Kyung Whee (Choi Minho) is an orthopedic resident who still feels weighed down by guilt of his high school love interest Na Bi (Lee Yoo Bi), who died by suicide. During one drunken night, he travels back in time and finds himself back in high school.

Albeit being a nerd during his school days and always being shielded by Na Bi, Kyung Whee rewrites the past and ultimately his present. He stands up to his former bullies, thus taking Na Bi’s side and even amusingly pranking their mutual rivals by using his knowledge of past events. His actions save Na Bi, who this time refuses to let go and instead holds on to hope.

The plot does address suicide, a sensitive subject that is often the result of intense bullying, both physical and mental, and it precisely depicts the issue while making sure to pinpoint its respective consequences and solutions. Other important lessons to learn from the drama are that the strongest people can also be frail, that misfits sometimes find salvation within one another, and that sacrifices are worth it when it comes to our loved ones. 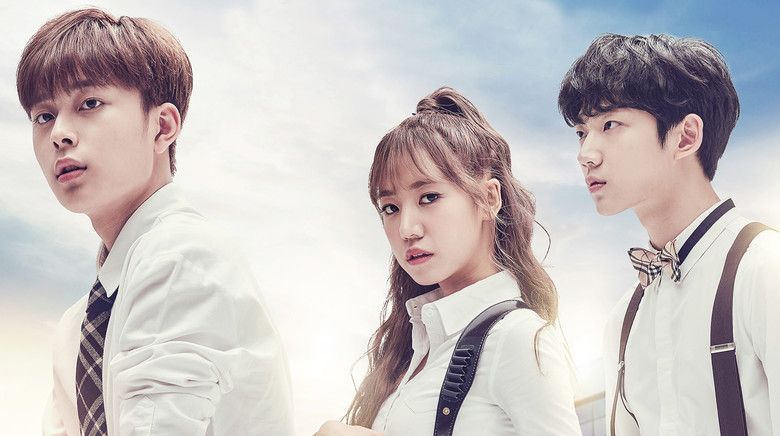 During a school exhibition, a mysterious attack leads to the disappearance of Seol Oh Sung (Ahn Hyeong Seop)’s and Pyo Han Eum (Yoo Sun Ho)’s parents when they were still children. Oh Jin Kyung (Apink’s Kim Nam Joo), who was also present at the scene, takes the boys under her care, and promises to bring their parents back. She becomes a dedicated police detective with a fervent determination for solving crime, and the boys follow in her footsteps as they grow up into brilliant case-solving high-schoolers who not only dissolve regular issues that happen between their colleagues at school, but also join their caregiver on her daily missions.

Eager and entertaining, the three partners possess a certain playfulness that turns the plot’s serious angle into a rather enjoyable police procedural. Drenched in silly humor, not only is each case resolved with wit, but it also contains a lively twist that exposes the true culprit and highlights once more the rebel detectives’ harmonious teamwork. 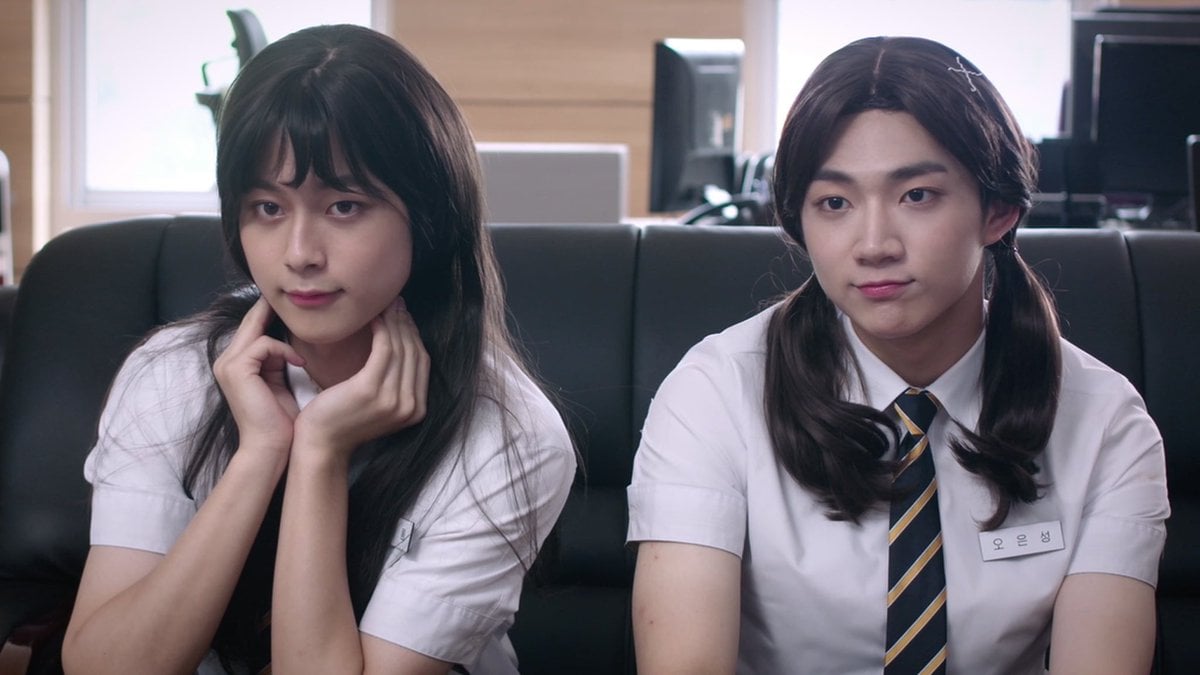 Make sure to view “Rebel Detectives” below: 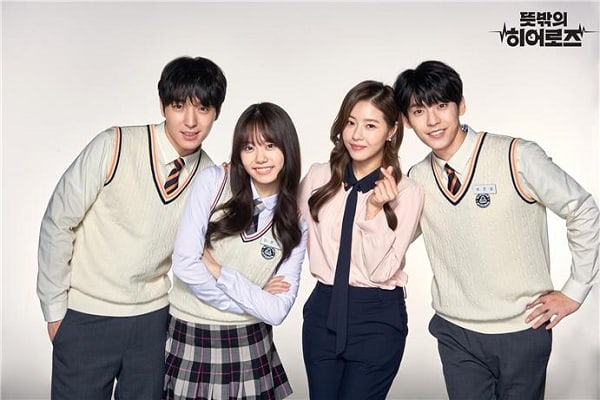 Min Soo Ho (FTISLAND’s Choi Jong Hun), Bae Yoon Young (BTOB’s Lee Minhyuk), and Lee Yoon Ji (Kim So Hye) are three high school students who suffer from severe health issues and need organ transplants in order to recover. Following their surgeries, their new health comes with an additional feature as they acquire abilities that respectively consist of super strength, a strong heart that sustains shock, and sharp vision according to the organ each one of them receives.

Questions start to arise after unsettling nightmares start haunting them in their sleep, and once they find out that their common donor lost his life in a mysterious car accident, they take it upon themselves to solve while relying on their superpowers.

Although unusual in a web drama, suspense is a major element in the plot. The brief twists accompanying the story will surely keep you on your toes! Furthermore, an interesting love triangle is set from the start, with Yoon Ji finding herself stuck between Yoon Young, who doesn’t seem to pay attention to her at first, and Soo Ho, who wishes she’d only have eyes for him.

Which web drama has piqued your interest? Let us know in the comments below!

Currently watching: “Suits”
All-time favorites: “Healer,” “Kill Me, Heal Me,” and “She Was Pretty”
Looking forward to: Ji Sung’s upcoming drama “The Wife I Know”