Super Junior’s Kim Heechul revealed the story of how he and fellow member Donghae liked the same girl on JTBC’s “Ask Us Anything.”

On the June 30 episode, the cast tried to find out what promise the Apink members had made with each other.

Kim Heechul guessed, “Let’s not steal each other’s boyfriends,” then added, “Our group talked about this too. The person that you like could overlap [with another member]. If this happens, then you need to quickly talk about it.” He had previously mentioned how two of the Super Junior members unknowingly dated the same girl on tvN’s “Life Bar.”

When Apink’s Bomi asked if this actually ever happened, Kim Heechul affirmed, “Of course. We have 13 members, so there’s no way it wouldn’t overlap.” He revealed, “For example, if there was someone named ‘Bomi,’ I said, ‘Hey Donghae. I really like Bomi.’ He replied, ‘Oh no, I like Bomi too.’ There was a time when something like this really happened.”

Kang Ho Dong asked, “Why did you use Donghae as an example?” and Kim Heechul answered, “This really happened to me and Donghae. During our trainee years, we liked the same person. I liked this girl and Donghae also liked this girl, but the two of us didn’t know.”

Using Jung Eun Ji‘s name as an example, Kim Heechul continued, “I went on a date with Eunji. One day when I called her, she was busy. I lived with Donghae at the time, but then, Donghae went out. When I asked him if he went out, he’d say, ‘Yeah I was out,’ then I’d go out the next day. We went out on dates like this [with the same person].”

He added, “One day, something felt weird so I asked him if he liked someone. While talking, we realized that it was the same person.”

Kang Ho Dong interjected to ask Namjoo and Bomi why they were laughing while looking at each other during Kim Heechul’s story and suspected that something similar happened amongst the girl group. They denied this and the Super Junior member finished telling his story. 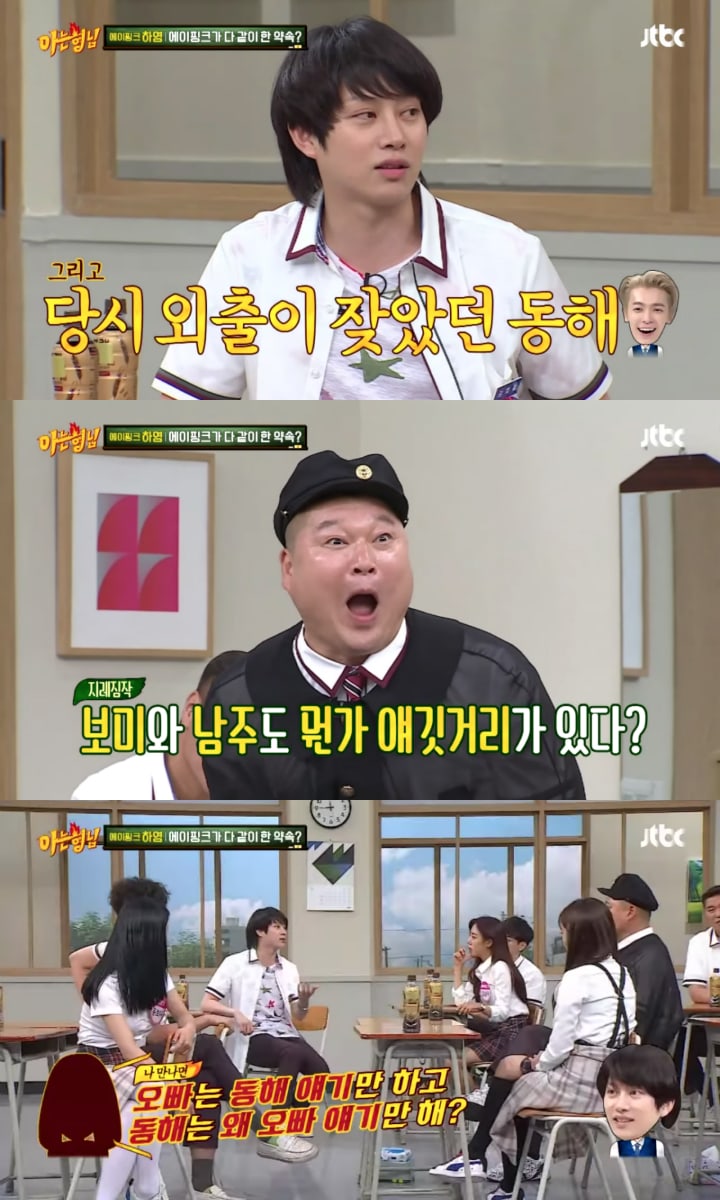 Kim Heechul said, “One rainy day, that girl called me. She said, ‘Are you two playing games with me?’ and I asked, ‘What’s going on?’ She said, ‘Why do you only talk about Donghae when you see me and why does Donghae only talk about you when he sees me?'”

He explained that Donghae had tried to help him with the girl and that he had done the same thing. In the end, both of them were dumped by the girl on the same day. “Standing in the rain together, Donghae and I became really close after this day,” he concluded.

Super Junior
Ask Us Anything
Donghae
Kim Heechul
How does this article make you feel?