MONSTA X made an appearance on a popular live television show in Thailand!

On June 29, the group appeared on the famous Thai morning show “Rueng Lao Chao Nee” to talk about their overseas promotions and their latest mini album “The Connect.” Fans hoping to see the group started lining up outside the studio as early as 7 p.m. the night before.

During the program, MONSTA X impressed the show’s hosts with a performance of their most recent title track “Jealousy,” with the hosts commenting, “Their performance was so powerful!” They added, “The most amazing part was that all the members were perfectly precise, even in the angles of their dance.” 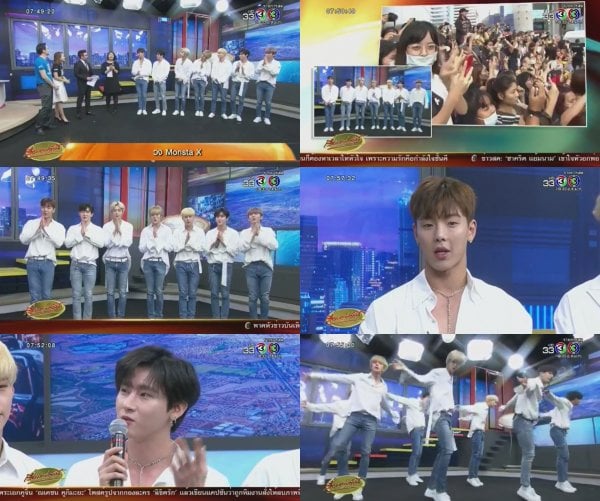 MONSTA X also talked about their concert in Bangkok on June 30, which is part of their ongoing world tour. When the hosts asked them how fans should prepare for the concert, the members replied, “In order to enjoy MONSTA X’s powerful concert, please make sure to eat a full meal beforehand.”

The idols also remarked, “We’re so grateful that you invited us here. We were happy just being able to meet our fans through our concert in Thailand, but we’re delighted that we were able to appear on such a popular Thai program.”

They continued, “I think we were able to enjoy our appearance on the show thanks to the MCs who welcomed us so warmly. Thank you so much.”

MONSTA X went on to successfully complete their Bangkok concert on June 30, and the group later shared photos from the event on Twitter.

After kicking off their “The Connect” world tour in Seoul in May, MONSTA X will be traveling to Hong Kong for their next concert on July 10.