The recent episode of MBC’s “The King of Mask Singer” revealed the identity of Dragonfruit to be a hip hop group vocalist turned trot singer!

“The King of Mask Singer” aired on July 1 and featured the contestants who had won in their respective rounds battle it out to see who would go against the reigning king. The first round was between Dragonfruit and Beckham. Dragonfruit performed Na Hoon Na’s “At Any Time” while Beckham sang BEAST’s “Beautiful Night.”

Though both contestants wowed the panel and audience members, Beckham ended up advancing to the next round at a vote of 42 to 57.

Dragonfruit took off his mask to reveal that it was Kangnam. The celebrity panel was shocked as they had not expected him at all, despite it being his second time performing on the show. Having debuted in 2011 as a member of M.I.B, Kangnam has now turned to trot music. 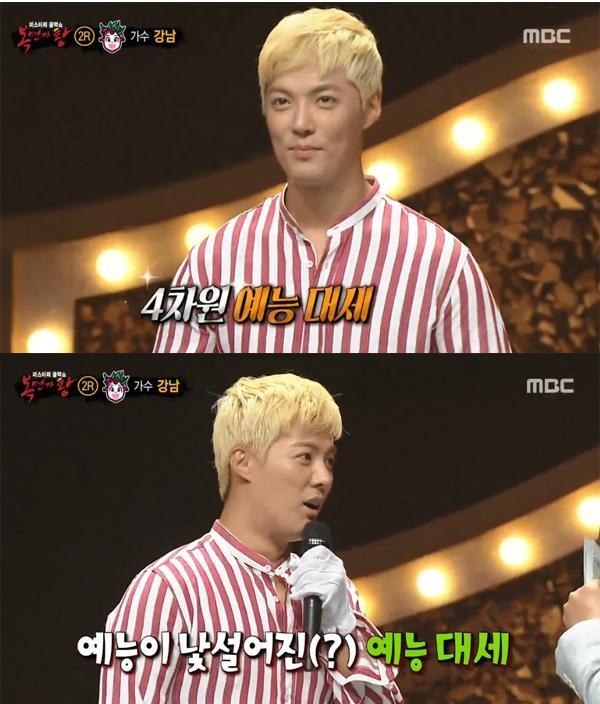 When asked why he decided to sing “At Any Time,” Kangnam explained that it was a song that his mother liked very much, and she had told him to sing it if he ever appeared on the show again. He also smiled and joked, “I went to a karaoke room with my dog in the early hours of the morning to practice and I think I spent about 200,000 won (approximately $180) there. I practiced so much that I’m sure my dog could sing along too.”

After leaving the stage, Kangnam expressed his nervousness and excitement about performing on “The King of Mask Singer” again. He stated, “I was so nervous as it was my first time singing on the show in two years. I hope I get called to perform again. Maybe I’ll advance even further. Even if I don’t have any songs that hit the jackpot, I’d like to become a singer that many people are happy to see when I release new music. I will always do my best.”

Kangnam also shared a photo of himself on his personal Instagram account and wrote, “I was Dragonfruit on ‘The King of Mask Singer.’ It was so nice to be there for the first time in a while. Good luck to Beckham!”

And watch his reveal as well!

Kangnam
The King of Mask Singer
How does this article make you feel?