On July 3, the young YouTuber was interviewed on the weekly entertainment news show for her first TV interview.

She began, “I’m 10-year-old Na Ha Eun who loves dancing.” Na Ha Eun first appeared on shows such as “Star King” and “Superstar K,” and she’s been captivating people with her moves since she was five years old.

Since then, she has shared various dance covers of popular songs by PSY, Wanna One, BTS, and more on YouTube. She not only does the choreography, but also conveys the emotions of the song with her facial expressions.

With 1.8 million subscribers, many of her videos have surpassed a million views with one of her most popular videos surpassing 16 million views. She has also appeared in an ad with Jay Park, danced with Block B in their “Shall We Dance” MV, performed with APRIL on stage, and introduced the nominees for Best Male Dancer and Best Female Dancer at the 2017 Melon Music Awards. 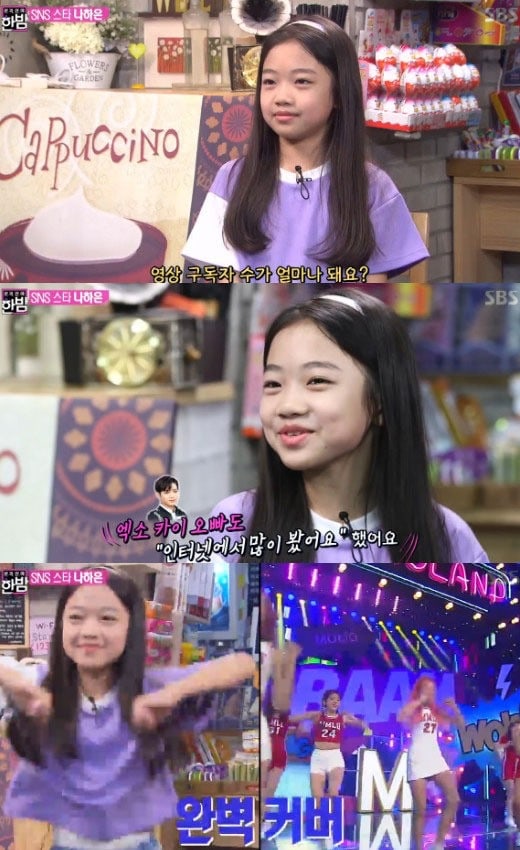 When asked if celebrities recognize her, she answered, “GFRIEND said, ‘I saw you dancing to our choreography in a video,’ and recognized me. EXO’s Kai also said, ‘We saw you a lot on YouTube.’ It was cool!”

She said she taught herself to dance while watching TV when she was three years old and currently receives formal training to learn new choreography every week.

The young dancer revealed, “In the past, I wanted to become a singer or a celebrity, but now I want to become a famous choreographer.” When asked why she works so hard at dancing, Na Ha Eun answered with a smile, “It’s just fun and I like it.”

Na Ha Eun officially made her debut as a singer in January. Check out a video of Na Ha Eun dancing with GFRIEND below!