MOMOLAND’s Nancy and Nayun hit up bnt International for their first photo shoot with just the two of them. Though nervous, they said they had a good time and are happy with the final product.

Now that “Bboom Bboom” has been written as a success, Nayun was able to reveal that the MOMOLAND members didn’t really like the song. She said, “The concept was so different [from our previous release]… but I liked it. I have the taste of the general public; the songs that I like are always high on the charts, so I thought our song would do well.”

Nancy on the other hand, says she’s quite the opposite. “If I say I like the song, there’s going to be a problem. But ‘Bboom Bboom’ grew on me with each listen. I should be getting tired of it by now, but I still like it.”

Due to the success of “Bboom Bboom,” the MOMOLAND members now all have their own cell phones. Nancy said, “Since we were trainees, we didn’t have cell phones, so this is everyone’s first time in three years. Now, we don’t know how we survived without them for so long.” 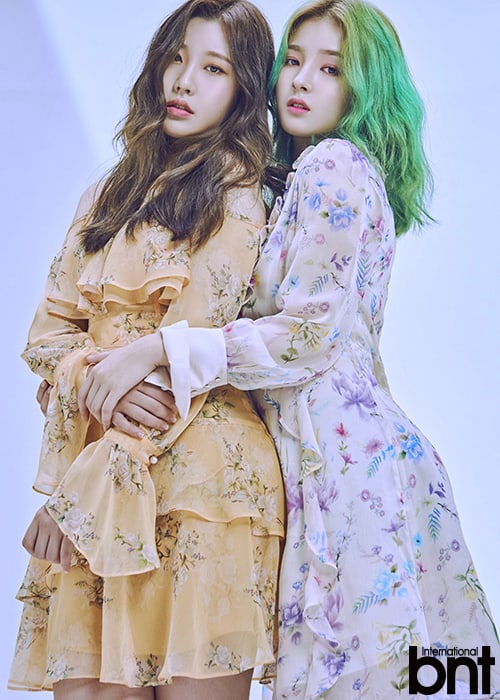 On other girl groups that they talk about a lot, Nayun said, “We talked a lot about Oh My Girl, BLACKPINK, who recently made their comeback, and AOA, because we really liked their songs and performances.”

Asked to pick role models, Nancy said, “In terms of the whole team, I would pick Girls’ Generation. If I were to pick individuals, Krystal and HyunA. What I think is the coolest about [Krystal and HyunA] is that they really seem to know who they are, and I really like that. And they’re always trying something new. I can see that they’re always learning and working on improving so that they can do more, and I think that’s so cool.”

Nayun expressed her outlook toward television and film. She said, “My role models are Hwang Jung Eum and Suzy. My major is in acting, and I want to try acting eventually, so people who are both singers and actors are very cool to me.” 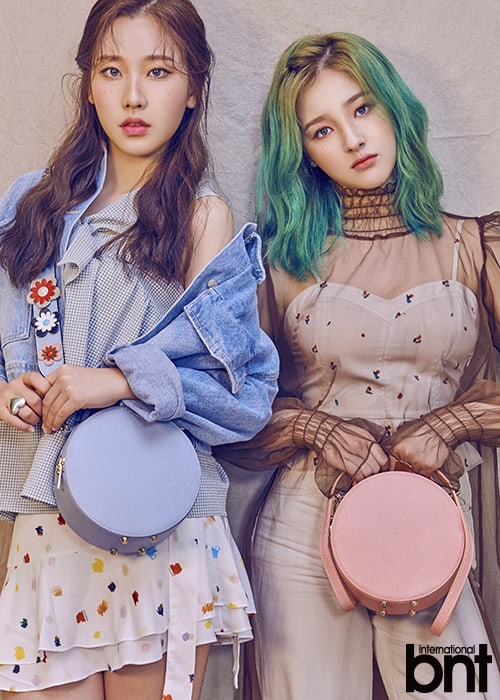 Talking about how they handle the stress of their work, Nayun said, “I often talk about what’s on my mind with my friends. Including PRISTIN’s Eunwoo and Kyulkyung, and UNI.T’s Hyunjoo, I have a lot of close friends that were born in ’98. Since we’re in the same line of work, we often talk to each other about concerns that we have.”

Nancy said that AOA’s Chanmi has been a big help to her. “I got to know AOA’s Chanmi when we were filming together. At the time we had been promoting our second release, and eveything was hard and stressful, but I had the chance to talk to Chanmi, and she said, ‘Those kinds of worries are all useless. Don’t worry about any of that; all you have to do is work hard. Everything is going to work out.’ That became a source of strength for me. We still occasionally text each other. Other than Chanmi, I’m close to APRIL’s Naeun, and ELRIS’s Hyesung, Sohee, and Bella.”

MOMOLAND
Nancy
Nayun
How does this article make you feel?