When Ong Seong Woo said hello to Hyeri, she began to giggle and reacted with shyness. Hyeri said, “I was a fan of ‘Produce 101.’ Ong Seong Woo was my ‘one pick,'” and Ong Seong Woo commented, “Hyeri helped me debut.”

SHINee’s Key said that he was previously cast members with Ong Seong Woo on a different show. Upon hearing this, Park Na Rae and Hyeri asked, “Why didn’t you say tell us this? Do you know his number?”

Key jokingly expressed sadness at their different reactions towards him versus Ong Seong Woo despite the fact that they’re both idols. Ong Seong Woo also shared a story of how Key took good care of him on the other show. Key proudly commented, “I’m that kind of person.” 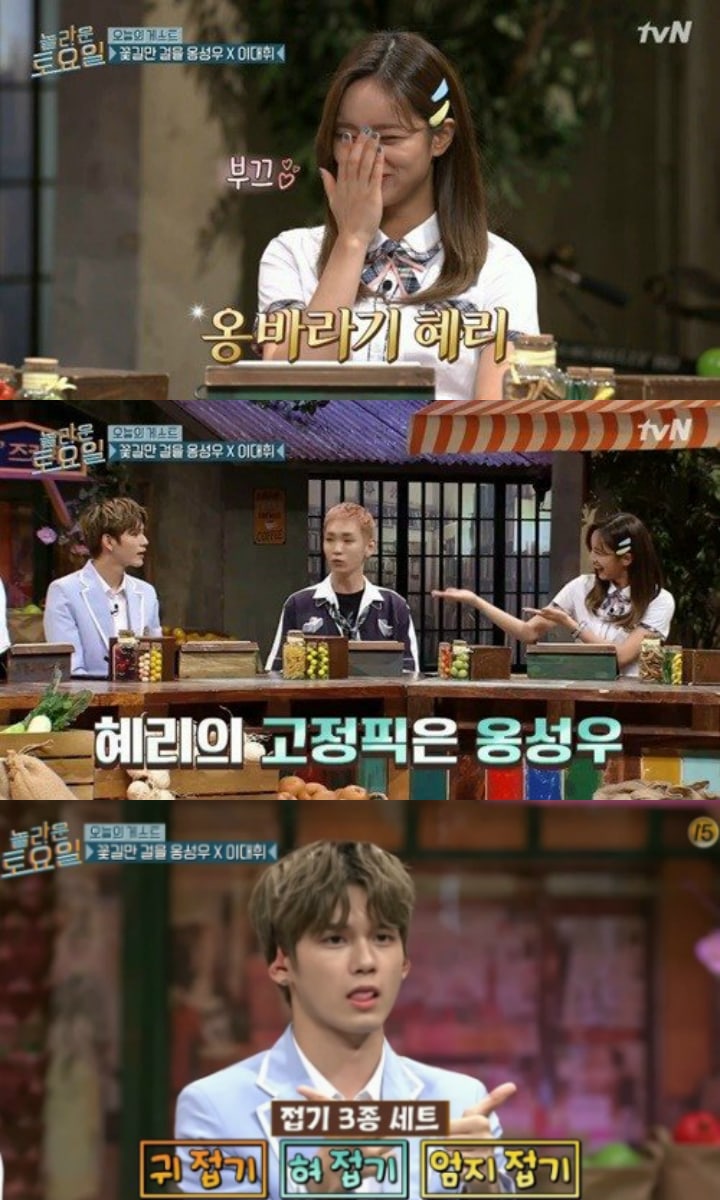 During the show’s segment “Do Re Mi Market,” the cast and guests tried to guess the lyrics to Red Velvet’s “Ice Cream Cake.” Lee Dae Hwi surprised everyone by getting the answer correct during the first round. He even correctly guessed most of the lyrics from the beginning.

The members debated whether or not to use up their hints and get it correct on the first round. Lee Dae Hwi said, “This is the biggest worry I’ve had in the 18 years of my life. If I don’t get this right, I’ll pay for the team dinner today.”

As Lee Dae Hwi approached the “answer zone,” Ong Seong Woo suggested a two-syllable word for the Korean word for “fountain” instead of the three-syllable word.

Lee Dae Hwi affirmed, “It’s not. I definitely heard it. My ears are good.” Key commented that Lee Dae Hwi is similar to him and Shin Dong Yup said, “It’s like seeing Key and Hyeri” while laughing.