Hello Venus’s Nara became emotional thinking about her members on JTBC’s “Ask Us Anything.”

On July 7, Nara appeared as a guest alongside Bora, and MOMOLAND’s Yeonwoo and JooE. Nara had written that her goal was “to reappear on ‘Ask Us Anything’ with all of the members as a whole group.”

She said, “I came on here and my members were really envious,” then began to choke up. After the cast members yelled at Lee Soo Geun for making her cry, he announced, “Next week is Hello Venus!” and made her smile as she wiped away her tears.

Nara said, “I recently played a crybaby character in a drama and it hasn’t been a while since I finished filming.” Kang Ho Dong added, “Hello Venus is the founding contributor of ‘Ask Us Anything,’ while Seo Jang Hoon commented, “We’re really not that great of a program.” 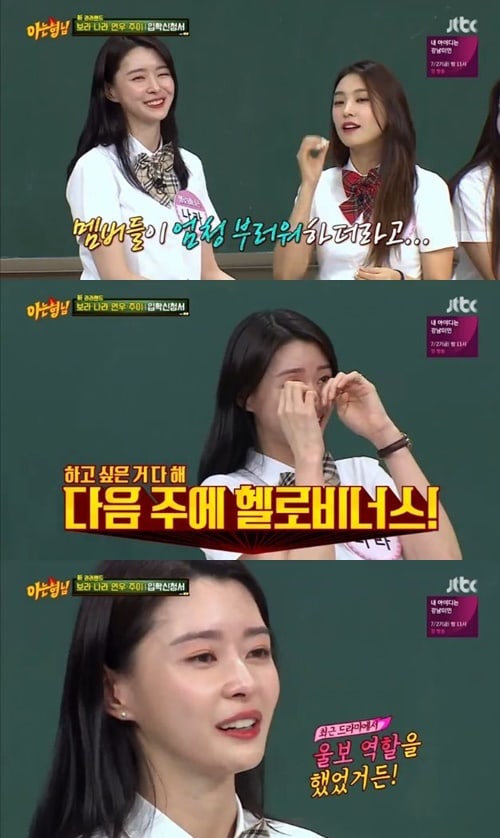 When asked why she suddenly started to cry, the girl group member answered, “To be honest, it’s been such a long time since we’ve appeared on a variety show as a whole group. So when I’m promoting alone like this, I miss them.”

Lee Soo Geun then shared that Yeonwoo had also written that she wanted to appear again on the show as a whole group, and the MOMOLAND members pretended to start crying as well.

Bora then silenced everyone by joking, “At least you can return with your members. So everyone be quiet.”

Knowing Bros
Hello Venus
Kwon Nara
How does this article make you feel?