Watch: Kang Han Na And HaHa End Their Luxurious Trip By Crossing The Longest Suspension Bridge In The World

The cast of “Running Man” dined like royalty and faced their fear of ghosts and heights.

On the July 8 episode, the variety program showed the members taking on some scary challenges.

After showing them a video of the mysterious past of the Oxford Castle, the staff explained, “Queen Matilda, who almost became the first Queen of England, was locked in here for three months and then died. You can still see her [ghost].”

They were then given a mission where each member had to enter a room, take polaroids of five letters, and guess the name in order for all members to be exempt from sleeping in the castle.

The members failed to correctly guess the name and Ji Suk Jin, Lee Da Hee, and Jun So Min ended up having to sleep in the castle. Despite their worries, they slept soundly and even snored. In the morning, they even told the staff that they wanted to sleep more.

The “Swiss Luxury Team” enjoyed a fabulous trip consisting of heli-skiing and dishes prepared by a Michelin star chef such as oysters and pork steaks with fresh ingredients imported from Italy four hours ago.

When it was time to settle the expenses, they played a game to see whose name would be written more on the roulette. The games were spotting the difference between two pictures and selecting a room. 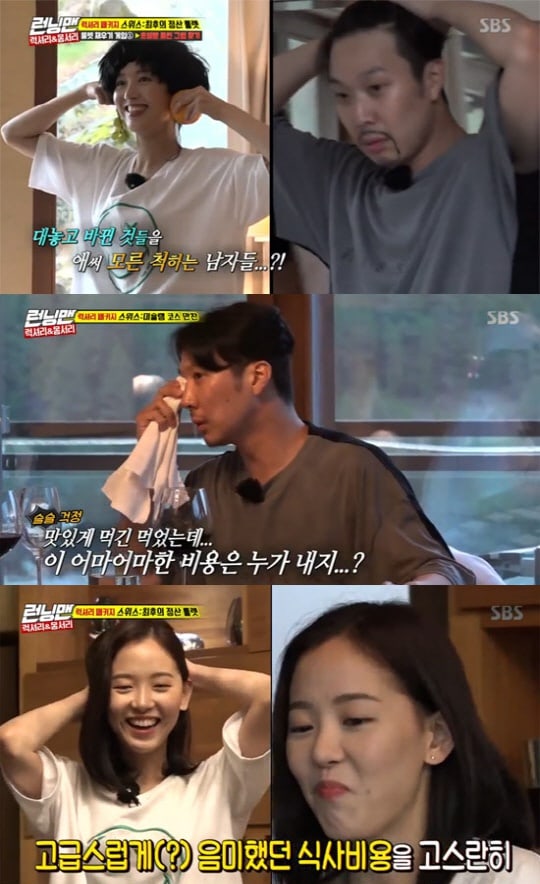 The staff offered one final mission for an opportunity to receive a refund. Kang Han Na suggested HaHa for the world’s longest suspension bridge mission and he actually ended up being chosen for it.

Early next morning, the two unlucky members climbed up the mountain to the Charles Kuonen Suspension Bridge. Located in Switzerland, it is the longest hanging bridge in the world at 85 meters (approximately 279 feet) up in the air, 494 meters (approximately 1,621 feet) long, and 25 inches (approximately 2 feet) wide. Despite his complaints in the beginning, HaHa was in awe when he saw the beautiful Swiss landscape and even thanked Kang Han Na.

They posed for selfies with a slug and a goat, and eventually reached the bridge. Although she had some difficulty at first, Kang Han Na soon adjusted to the bridge and encouraged HaHa. He sent a video message to his kids and also succeeded at crossing the bridge.

HaHa said to the staff, “You better air a lot of this footage!”

Kang Han Na
Running Man
HaHa
How does this article make you feel?