“Time” is about a wealthy but cold-hearted man named Cheon Soo Ho (Kim Jung Hyun) who doesn’t have much time to live. He spends his last days helping a bright and optimistic woman named Seol Ji Hyun (Seohyun) whose life has been ruined by him.

In the released photos, Cheon Soo Ho can be seen in a chaotic fight scene. When his half-brother Cheon Soo Chul (Seo Hyun Woo) starts a quarrel, drunken Cheon Soo Ho can’t hold back his temper and starts a fist-fight out of anger. The two half-brothers fight violently in the hotel sky lounge, causing a messy scene and shocking the customers in the room.

Above all, Cheon Soo Ho, who has a scratch on his face and lips that are caused by the fight, threatens Cheon Soo Chul with a sharp weapon in his hand. After witnessing Cheon Soo Ho’s boldness and violent temper, Cheon Soo Chul freezes with fear. Viewers are wondering what caused the disastrous fight between the two half-brothers. 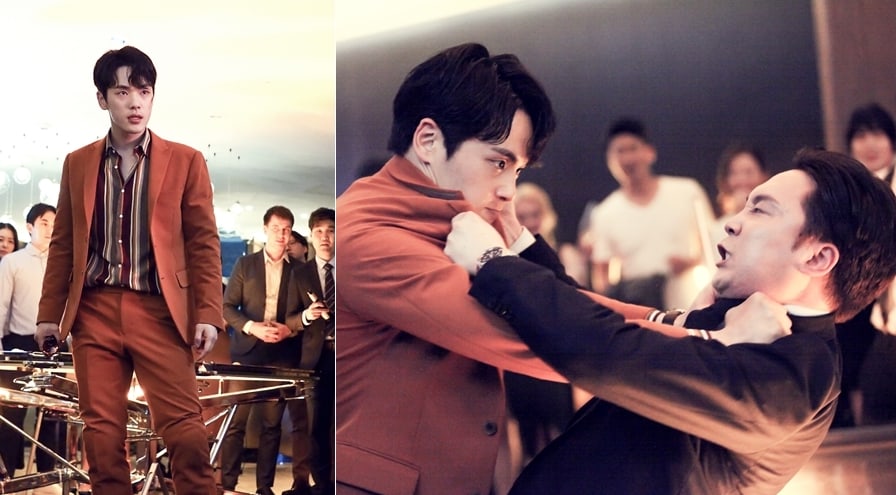 This scene was filmed on June 12 at a hotel in Incheon. Kim Jung Hyun and Seo Hyun Woo had to pretend to fight intensely while controlling their tension. Due to circumstances that could lead to injury, the two men repeatedly practiced matching the lines even before they started shooting. Once the filming was over though, they gave each other a hug and exchanged words of “good job,” warming up the atmosphere with their friendship.

The production crew stated, “Kim Jung Hyun paints each scene with a performance full of energy. In particular, while displaying his conflicted relationship with his character’s half-brother Cheon Soo Chul, he didn’t refuse extreme action scenes and acted passionately. Please look forward to Kim Jung Hyun’s performance, which will be quite different from his previous works.”

“Time” will premiere on July 25 after the conclusion of “Come and Hug Me.”

Watch a trailer for the drama below: