TWICE was the latest guest to appear on JTBC’s “Idol Room”!

On July 10, the nine members had fun dancing and playing games on the idol variety show.

Chaeyoung said, “I liked reading poetry for a bit and I wrote a poem for ‘Idol Room.'” When asked if there was a nickname she wanted to go by, Chaeyoung answered, “Strawberry” and became “Strawberry Chaeng.”

She then read out loud her poem that wittily incorporated the titles of TWICE’s songs. She said, “‘Idol Room’ thankfully sent us a ‘Signal‘ so TWICE ‘Knock Knock‘ed and entered ‘Idol Room.’ We’ll work hard to ‘Heart Shaker‘ the viewers, so I hope you’ll ‘Likey‘ it a lot.”

The TWICE members also created their own emoticons and showed how they can communicate with each other by just using their facial expressions.

During the “Nano Dance” segment, each member showed a key point in their choreography for their latest title track “Dance the Night Away.”

After completing the “Nano Dance,” the members asked about the “Attention Dance” challenge and said they wanted to do it. The “Attention Dance” is where idols have to dance to their choreography without using their hands, keeping their arms stiffly to their sides like a soldier at attention.

TWICE took on the dance challenge to “Knock Knock.” Although there were times when the members were offbeat or in the wrong spot, they ultimately succeeded!

In the segment “TWICE Fact Check,” the girl group revealed their first ever sexy concept. Momo showed a sexy dance to “TT,” Jihyo to “Knock Knock,” Chaeyoung to “Signal,” and Mina to “What is Love?“

The members also brought up Nayeon’s trademark sexy pose. Jihyo said, “It was the day of a fan event. Nayeon wore an off the shoulder top and pouted her lips.” Listening to her members, Nayeon slightly tilted her head and recreated the pose. Jeongyeon then also imitated her pose.

The MCs then requested a sexy pose from Dahyun. She protested, “I really can’t do it,” but perfectly recreated Nayeon’s pose. Jung Hyung Don commented, “Dahyun, you’re like an adult,” and she replied, “I am an adult!”

Nayeon also spoke about her love for rap. She had previously stated at a showcase that she’s good at rapping. Calling herself by her rap name “MC Rail,” she performed HAON and VINXEN’s “Barcode.”

Jihyo concluded, “It was our first time on ‘Idol Room’ and I think we did well. We’ll make sure to watch it when it broadcasts.” Mina added, “We made a comeback with our first summer album, so please give us love.” 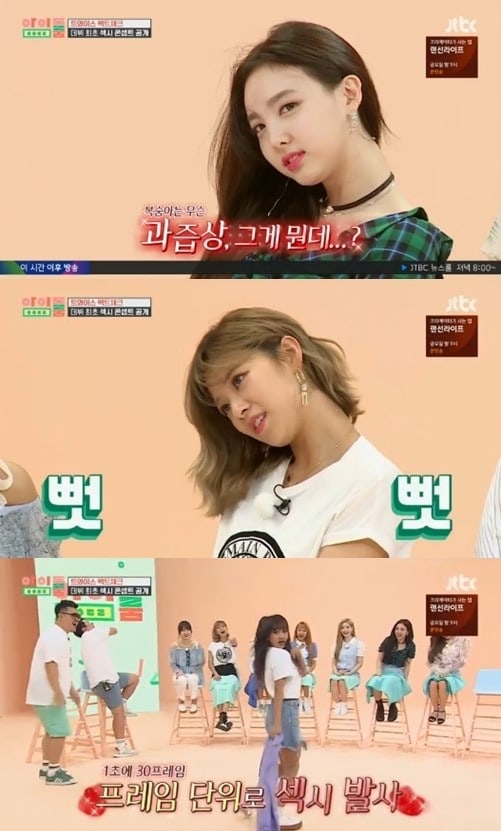 TWICE released their special album “Summer Nights” and title track “Dance the Night Away” on July 9.

TWICE
Idol Room
How does this article make you feel?