“Witch’s Love” is a fantasy romance about a human man that ends up living together with three witches. Yoon So Hee will star as Kang Cho Hong, an extremely nosy witch who handles deliveries for a restaurant run by two other witches. Hyun Woo will play the role of Ma Sung Tae, a wealthy human building owner whose path happens to cross that of the three witches—and who ends up finding himself inextricably entangled in their lives.

In newly released stills from the drama, Kang Cho Hong and Ma Sung Tae meet for the very first time in a convenience store. The photos show the two characters bickering with one another before their argument takes an unexpectedly violent turn. In one of the stills, Ma Sung Tae appears to have caught Kang Cho Hong off guard—but in the end, it’s the witch who has the last laugh, and Ma Sung Tae winds up on the floor after Kang Cho Hong manages to flip him over her shoulder. 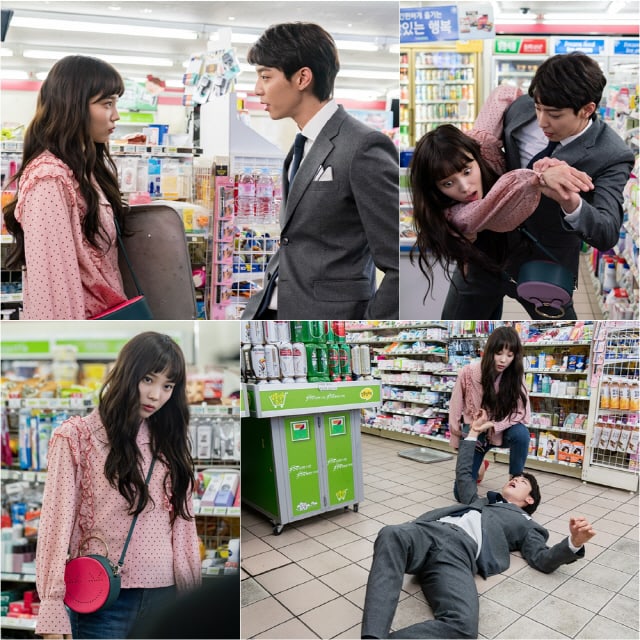 The two actors rehearsed the scene multiple times under the guidance of a martial arts director. According to those present during filming, Yoon So Hee and Hyun Woo joked around with one another on set throughout rehearsal, praising each other’s athletic abilities. Yoon So Hee also reportedly received the applause of the crew after managing to flip over Hyun Woo in spite of their considerable height difference.

The producers of “Witch’s Love” commented, “The unique subject matter of a romance between a restaurant delivery witch and a human man will provide viewers with a new kind of entertainment that they haven’t seen before. The two characters’ bickering chemistry will simultaneously deliver refreshing laughs and a heart-fluttering electricity, so please look forward to it.”

“Witch’s Love” will premiere on July 25 at 11 p.m. KST. The drama will be available exclusively on Viki.

Yoon So Hee
Witch's Love
Hyun Woo
How does this article make you feel?