NU’EST W appeared on KBS CoolFM’s “Moon Hee Jun’s Music Show” on July 11 and had listeners laughing as they spilled the tea on each other, especially Ren.

The members were asked a series of questions, and when they were asked which member they wouldn’t want to share a room with in the dorms, all of the members chose Ren. Baekho explained, “Ren has too much energy inside him. I’m the kind of person who wants to just rest at home and relax, but Ren’s excitement seems to skyrocket when he gets home. He keeps dancing, and he even bought a mirror ball recently.” Aron said, “My reasoning is the same. I’m quite a sensitive and light sleeper. I don’t think I’d sleep well if he kept dancing next to me.” JR had everyone laughing when he teasingly said, “I just felt like picking him.” 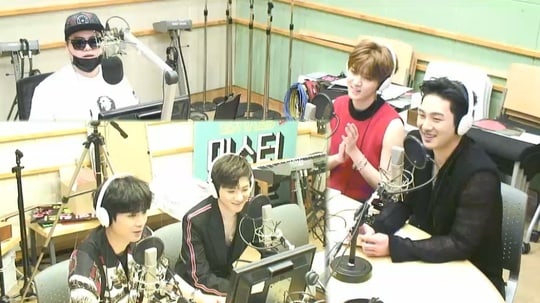 As they’d shared who they didn’t want to share a room with, NU’EST W also shared who they’d be happy to have as a roommate. Aron picked JR and explained, “I don’t usually like games, but I recently got into one. We play the same game, so it would be fun to play together.” JR reciprocated and said, “I was about to pick Aron too for the same reason. I think it’d be nice to have someone to play games with.”

Baekho picked JR, saying, “When he’s in his room, all he does is play games. I feel like even if we shared a room, it would still feel like I had my own room. We’d be able to have independent spaces.” Finally, Ren picked Baekho and explained, “He works on music a lot, so he spends a lot of time at the recording studio. That means I can have the room to myself for long periods of time.”

The members also opened about getting their first win for their latest track “Dejavu” last week. They said, “We don’t really ever place any expectations on getting a music show win. It’s not that we don’t, it’s more like we can’t. We haven’t had a lot of wins, so it’s still unfamiliar to us. We were really flustered by the win. We were happy, but we were flustered so we couldn’t speak.”

NU’EST W is currently busy with promotional activities with “Dejavu.”