“Produce 48” has once again proven to generate lots of buzz!

The Good Data Corporation revealed the ranking of the most buzzworthy television appearances from July 2 through 8. The results are based on the analysis of reactions on 1,676 cast members and guests from 192 non-drama programs through news articles, blog posts, online communities, social media, and video clip view counts.

Eight of the top 10 are “Produce 48” contestants, with Miyawaki Sakura and Yabuki Nako maintaining their top two spots. Four other Japanese contestants are on the list including Matsui Jurina, whose departure from the program was recently announced. The Korean contestants in the top 10 are both from Starship Entertainment.

With the return of “It’s Dangerous Beyond the Blankets,” Wanna One’s Kang Daniel rose 270 spots to take fourth. In eighth place is YouTuber BuzzBean with his appearance on JTBC’s new show “LAN Life.” 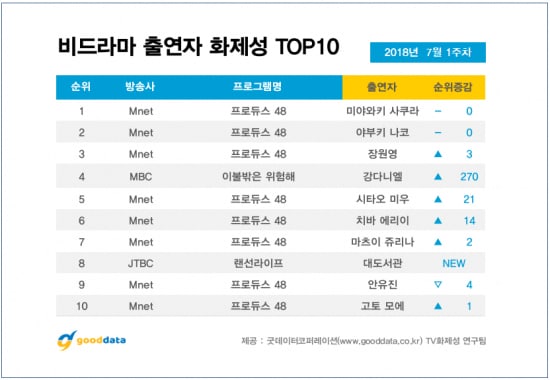 Make sure to vote in our “Produce 48” International Prediction Poll here!

Wanna One
Kang Daniel
It's Dangerous Beyond the Blankets
Produce 48
LAN Life
How does this article make you feel?