Bolbbalgan4 and BLACKPINK swept the digital charts this month, taking the top two spots on the download chart, streaming chart, and overall digital chart for the month of June. Meanwhile, Wanna One topped the monthly album chart with their special album “1÷χ=1 (UNDIVIDED).”

Girl groups also dominated the charts for the week of July 1 to July 7, with BLACKPINK, Apink, and MAMAMOO claiming the top spots in the latest rankings.

Bolbbalgan4’s “Travel” and BLACKPINK’s “DDU-DU DDU-DU” took No. 1 and No. 2 respectively on both the overall digital chart and the streaming chart for June, with BTS’s “Fake Love” trailing at No. 3 on both charts. AOA’s “Bingle Bangle” claimed No. 4 on the overall digital chart and No. 5 on the streaming chart, while Nilo’s “Pass” came in at No. 5 and No. 4 on the two charts. 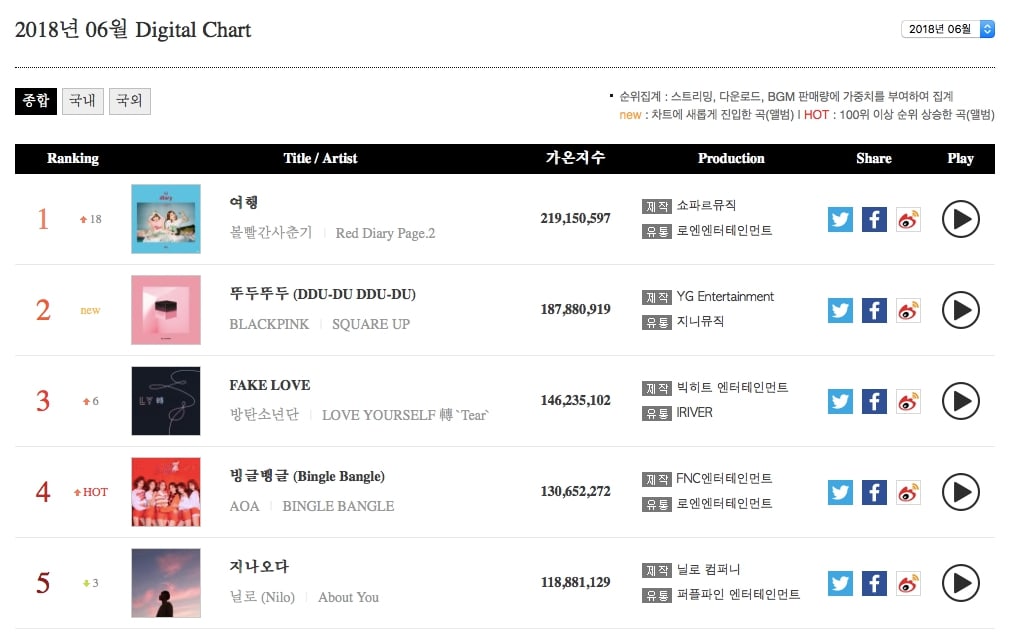 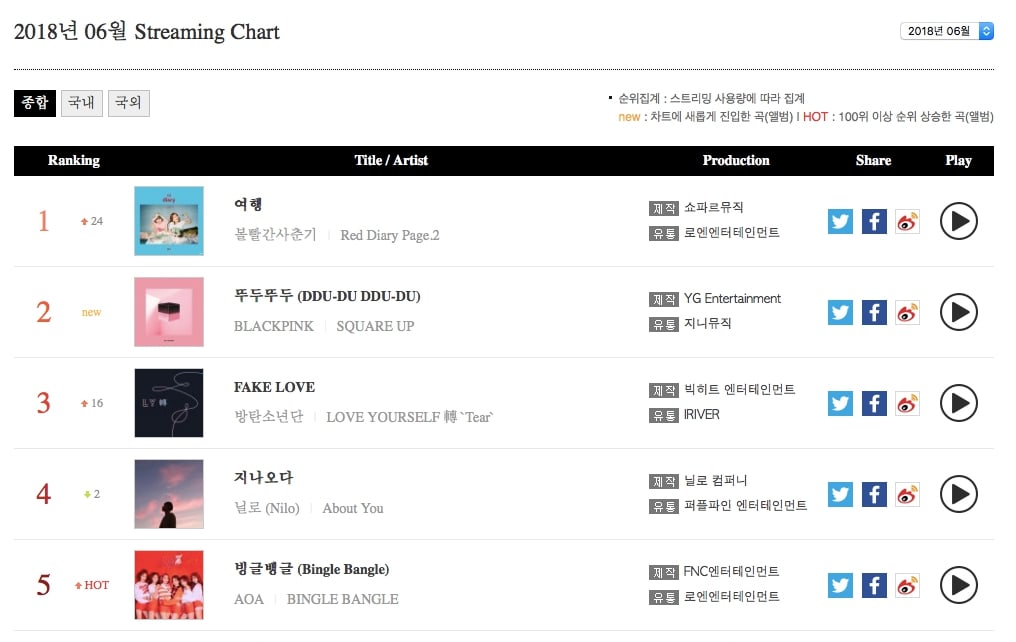 BLACKPINK took both No. 1 and No. 3 on the monthly download chart with “DDU-DU DDU-DU” and “Forever Young,” while Bolbbalgan4’s “Travel” rose one spot to No. 2 for June. Wanna One’s “Light” and BTOB’s “Only One for Me” followed at No. 4 and No. 5 respectively. 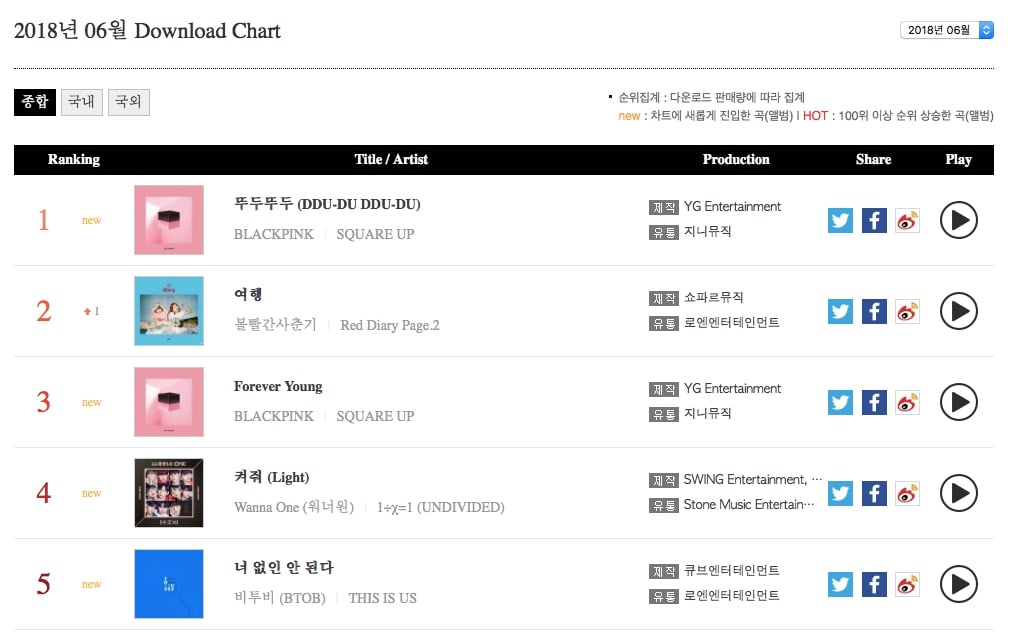 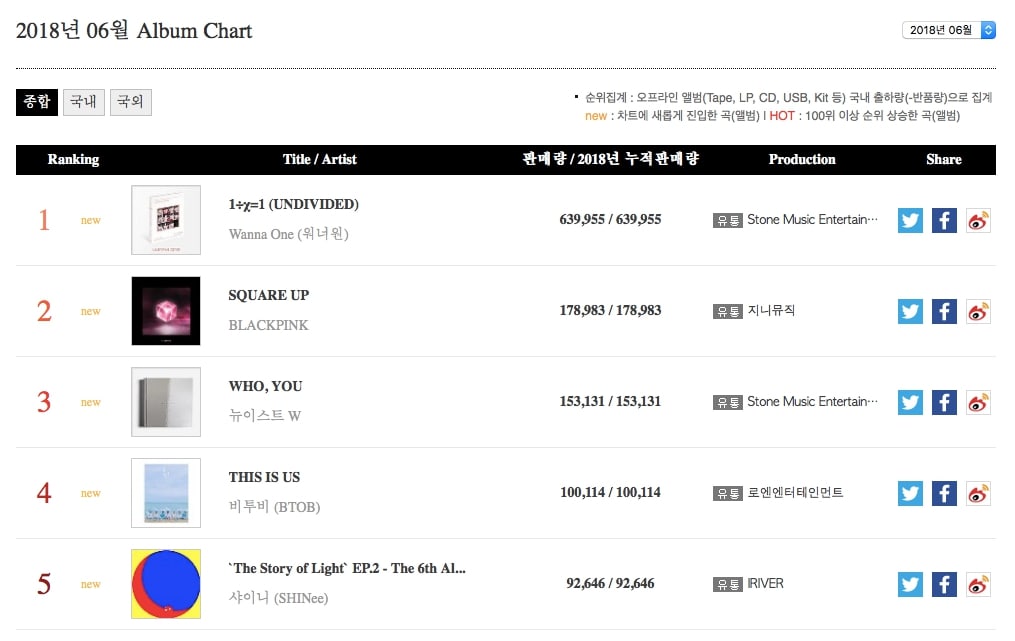 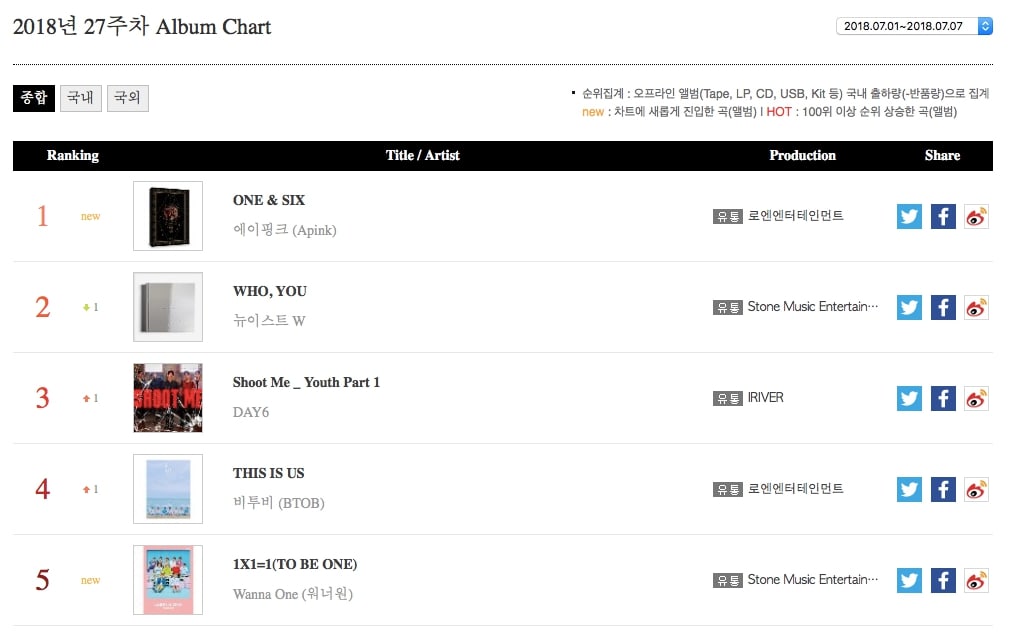 BLACKPINK’s “DDU-DU DDU-DU” maintained its position at the top of the weekly overall digital chart, with MAMAMOO’s new pre-release track “Rainy Season” debuting at No. 2. Bolbbalgan4’s “Travel” held onto its spot at No. 3, followed by MeloMance’s “Tale” at No. 4 and BLACKPINK’s “Forever Young” at No. 5. 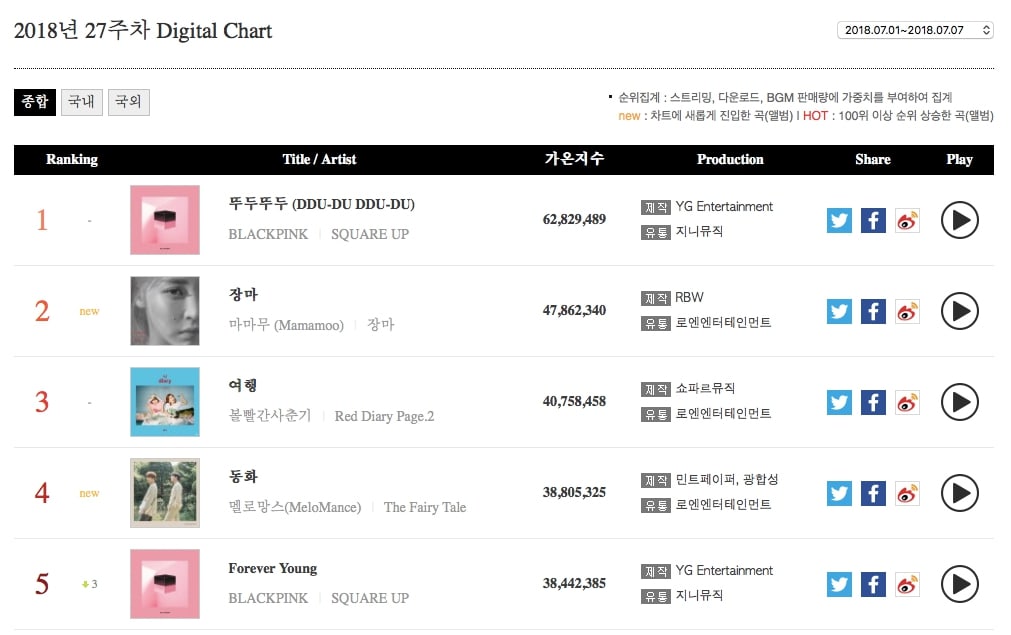 BLACKPINK also enjoyed another week atop the weekly streaming chart with “DDU-DU DDU-DU,” while Bolbbalgan4’s “Travel” and BLACKPINK’s “Forever Young” remained at No. 2 and No. 3 respectively. MAMAMOO’s “Rainy Season” entered the chart at No. 4 this week, with BTOB’s “Only One for Me” rounding out the top five. 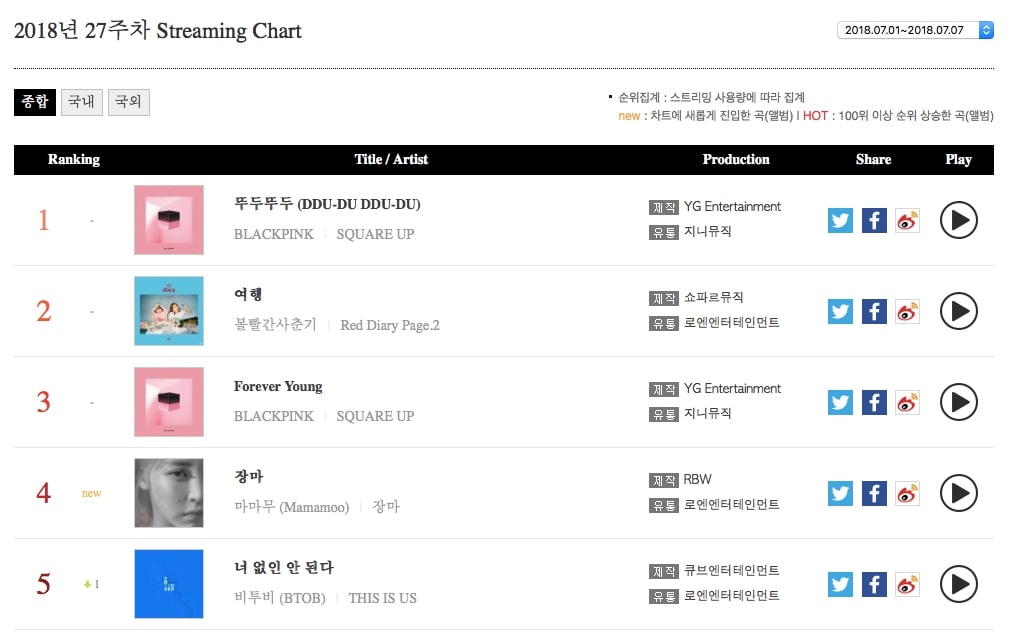 New releases dominated the weekly download chart this week, with MAMAMOO’s “Rainy Season” debuting at No. 1, MeloMance’s “Tale” debuting at No. 2, and Apink’s “I’m So Sick” debuting at No. 3. NU’EST W’s “Dejavu” took No. 4 for the week, followed by BLACKPINK’s “DDU-DU DDU-DU” at No. 5. 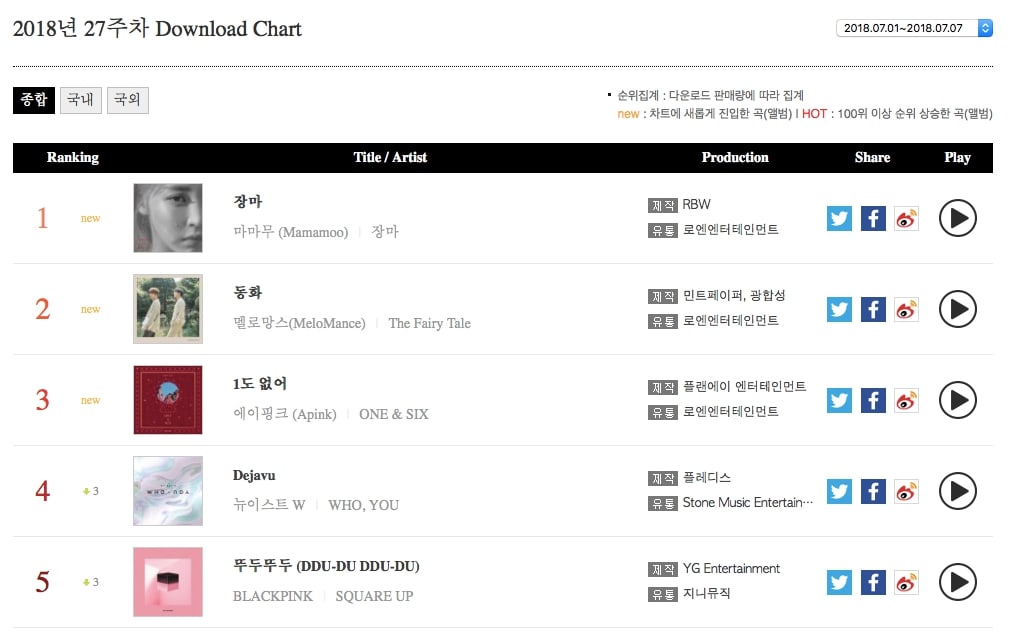 Apink’s new title track “I’m So Sick” debuted at No. 1 on the social chart this week, while BTS’s “Fake Love” and “DNA” held onto their spots at No. 2 and No. 4 respectively. MOMOLAND also took two spots in the top five this week, with “BAAM” at No. 3 and “BBoom BBoom” at No. 5. 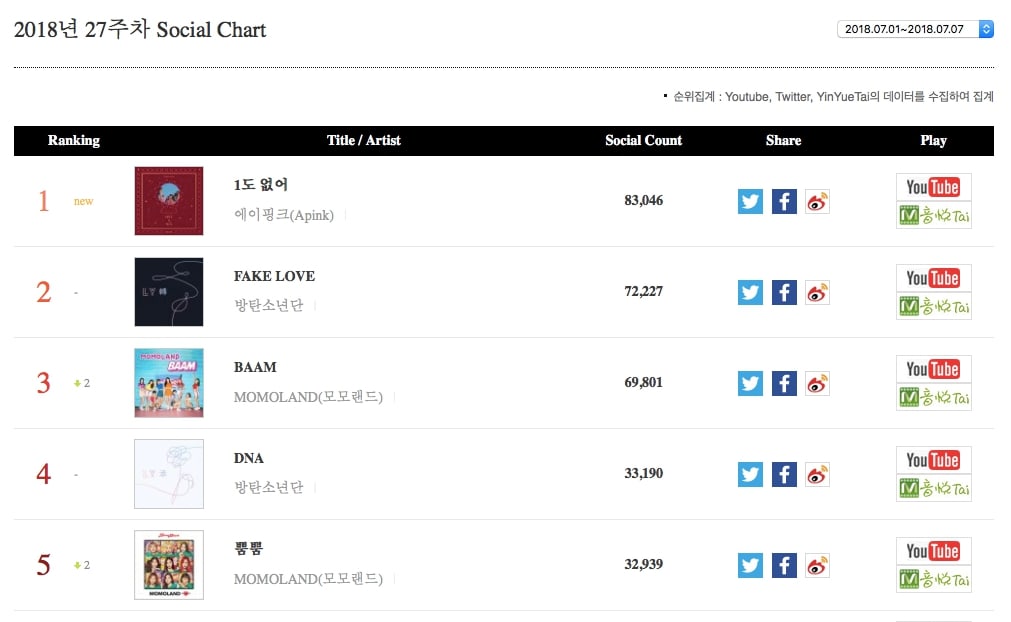