The identity of Salvador Dali on MBC’s “The King of Mask Singer” was revealed to be a main vocalist of an idol group well-known for their synchronized choreography.

The episode of “The King of Mask Singer” that aired on July 15 featured singing battles between contestants to see who would go up against the reigning champion, Bob Ross. Salvador Dali was the one who made it to the final round, where he faced off against Bob Ross to see who would be crowned the next king.

In the end, Bob Ross was the defending champion. With a vote of 25 to 74, he clinched his third consecutive victory.

Salvador Dali took off his mask to reveal that it was none other than INFINITE’s Woohyun. 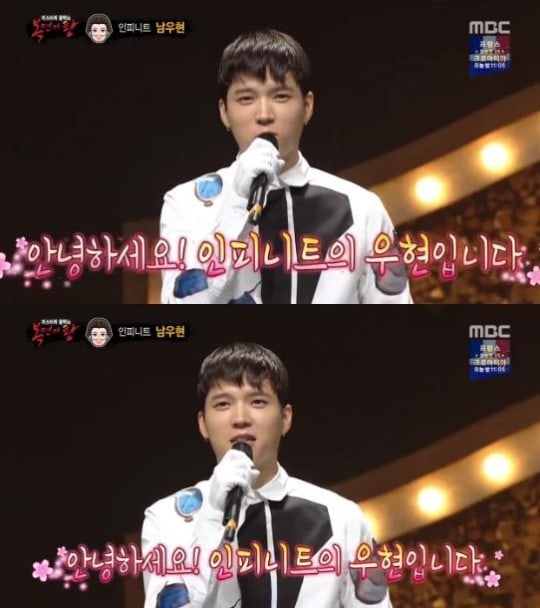 Revealing that he had been preparing for a “The King of Mask Singer” appearance for a year and a half, Woohyun said, “I’ve been keeping notes on my phone for what song I should sing for the show.” He went on to say, “I ended up giving the production staff twenty songs I had in mind.”

He also shared why he was a little disappointed by the celebrity panel as he said, “I was sad that my name didn’t get mentioned even once by the panel.” He had everyone laughing as he added, “I was on a music show with Kim Gura for eight weeks, so I thought he’d know my voice.”

After coming down from the stage, Woohyun shared, “I never imagined I’d make it up to the third round. I want to sing songs that can heal people. I want to keep singing with all of my heart,” and “I hope people will remember me as an idol group member who sings really well. I’ll keep working hard on my singing, so please keep watching over me.”

INFINITE’s official Twitter account also shared more photos of Woohyun with his mask with the caption, “Oh my goodness! Our Hyun-ie really took over the entire stage. We think it was a great opportunity to showcase Woohyun’s vocal talents to the whole world, right? Is there a way we can cast our votes for Woohyun? We would give him 910208 votes!”

Catch his performances on the show below!

Watch his reveal as well!

Nam Woohyun
INFINITE
The King of Mask Singer
How does this article make you feel?