SEVENTEEN On Their Latest Concept, Reveals They Gave Sneak Peeks Of “Oh My!” Choreography Before Release

July 16, SEVENTEEN held a showcase for their comeback with their 5th mini salbum “You Make My Day,” which comes five months after the group’s special album, “Director’s Cut.”

Mingyu said, “This time, we prepared our album and concert at the same time. To be honest, we showed bits of our ‘Oh My!’ choreography a lot during our concert performances. We’d like it if our fans could identify [which ones] after we release the album.” 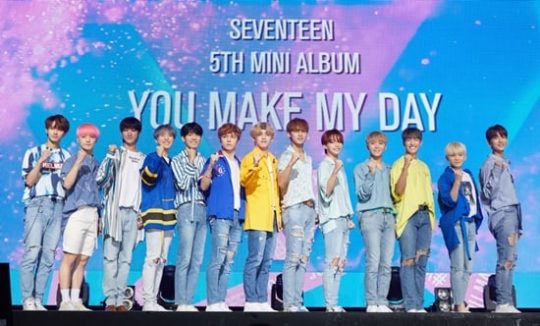 SEVENTEEN has returned to the young and fresh concept they did three years ago. Woozi said, “I think our ‘fresh’ from three years ago and our ‘fresh’ now will be different.” As the member to best pull off the concept, the SEVENTEEN members chose Dino, who’s sporting pink hair for this latest release. Dino said, “We wanted to do something different for this comeback, and I even dyed my hair to match the concept for our title track.”

With 13 members, teamwork and bonding within the group is always a priority. SEVENTEEN’s Seungkwan said, “After finishing up filming for a variety show, I joined practice late. When I arrived, the members were playing Mafia. They must’ve been tired because it was a day before our comeback, but seeing everyone give their all in the game, I was moved.”