tvN’s “Let’s Eat 3” surprised viewers with the story of one of its beloved characters.

On July 17, the drama aired its episode about grilled hairtail and kimchi dishes. Goo Dae Young (played by Highlight’s Yoon Doojoon) reunited with his college classmate Lee Ji Woo (played by Baek Jin Hee) and expressed sadness at the fact that she lost her charismatic palate. He confidently stated, “I’m going to help you find your sense of taste again,” and began taking her to famous restaurants.

Later, after finding a restaurant to go to for the day, Lee Ji Woo excitedly said, “I should suggest we go here today.” She then called out to Goo Dae Young next door and asked him where he was going.

He replied, “I’m going out of town, so I think I’m going to be a bit late. Let’s eat together next time.” Seeing the bouquet of flowers in his hand, Lee Ji Woo commented to herself, “He must be going to meet his girlfriend.”

Goo Dae Young then arrived at a charnel house where he reminisced. The drama took viewers to the past where Goo Dae Young bid his girlfriend Baek Soo Ji (played by Seo Hyun Jin) goodbye at an express bus terminal.

She talked to him on the phone during her bus ride while he was driving back home. A truck suddenly drove straight towards him and he quickly swerved out of the way. He then felt that something was wrong and repeatedly called out to his girlfriend over the phone.

The next scene revealed that the express bus had also gotten into a car accident. It was on its side with many passengers bleeding and ejected from the bus. Baek Soo Ji was one of the victims killed in the car accident. 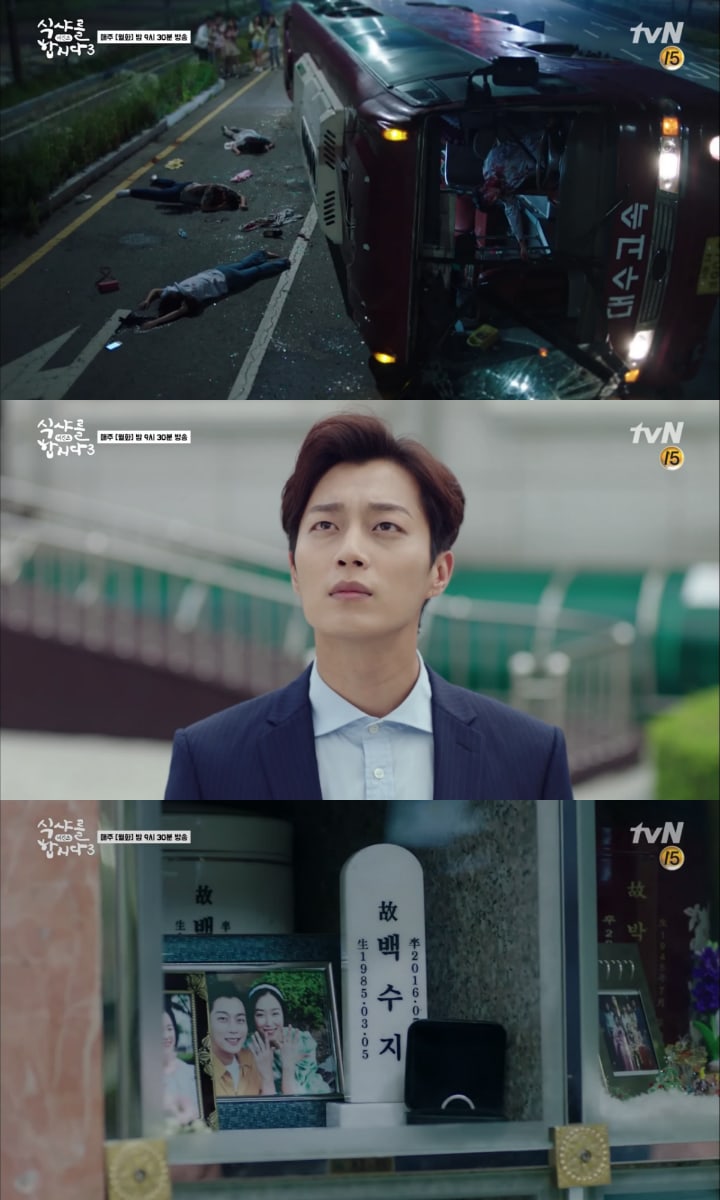 “Let’s Eat 3” tells the story of Goo Dae Young healing from the pain of the past by sharing food and memories with Lee Ji Woo.

The series airs on Mondays and Tuesdays at 9:30 p.m. KST. Check out the first episode below!