KARD got closer with Super Junior on XtvN’s “Super TV 2”!

On the July 19 episode, Super Junior’s Kim Heechul said he’s a huge fan of KARD, and danced and sang to one of their songs.

Giving BM a hug, Kim Heechul said, “I saw him so much on social media. I saw him taking off his shirt and the other two members reacting in surprise. It always comes up on my social media.”

The KARD members later spoke in their dressing room about the Super Junior member they want to get close to.

BM answered, “Choi Siwon. I was a fan since watching him in the drama [‘She Was Pretty‘]. Seeing his smile in real life reminded me of it. He also took good care of me earlier.” The program showed footage of Choi Siwon and BM talking in Korean and English during the break.

J.Seph said, “Shindong. He’s warm and nice.” Somin answered, “Kim Heechul. I start laughing just looking at him.” Jiwoo added, “I just like all of them. It felt like I was just observing and it was really funny.”

Somin continued, “Also, I can tell they did variety programs for a long time.” Jiwoo added, “We should all be careful. They’re all talented. They each have something they’re good at.”

After J.Seph praised Heechul’s quick thinking, Jiwoo joked, “Does that mean we should pick Donghae first?”

After the break, the teams returned to the set. Eunhyuk mentioned BM saying that he wanted to get close with Super Junior and suggested dancing to “Lo Siento” with BM. The two danced perfectly in-sync and were also joined by Kim Heechul.

When Leeteuk asked J.Seph if he also wanted to try dancing to the song, he chose Eunhyuk as his dance partner.

J.Seph’s moves made everyone laugh and the Super Junior members likened them to Leeteuk’s. The two of them then danced together and earned praise from their members. 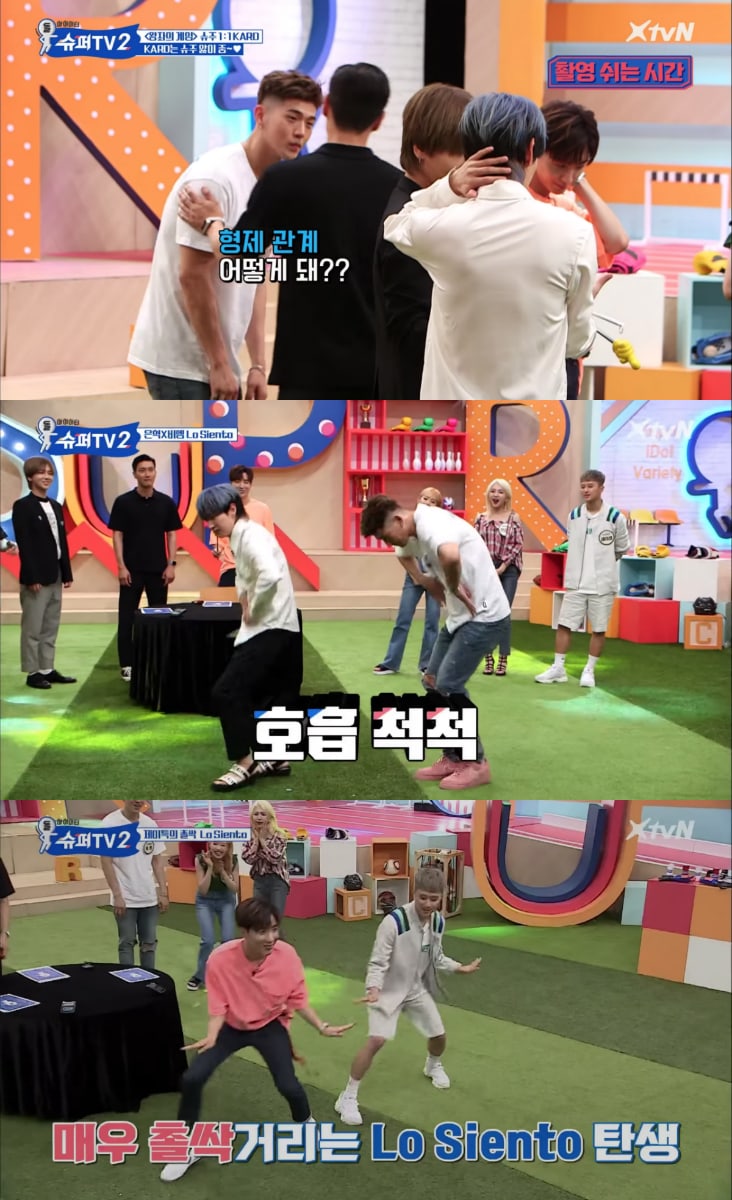 “Super TV 2” airs on Thursdays at 8 p.m. KST. Watch KARD and Super Junior dancing together below!

Super Junior
KARD
Super TV 2
How does this article make you feel?