“30 but 17” has released photos of Yang Se Jong and Ahn Hyo Seop displaying their bromance ahead of its premiere on July 23!

“30 but 17” is a romantic comedy about Woo Seo Ri (Shin Hye Sun), a woman who falls into a coma at 17 but wakes up 30, and Gong Woo Jin (Yang Se Jong), a man withdrawn from the world due to a traumatic experience he goes through at 17. Ahn Hyo Seop plays 19-year-old Yoo Chan, Gong Woo Jin’s nephew and protector. 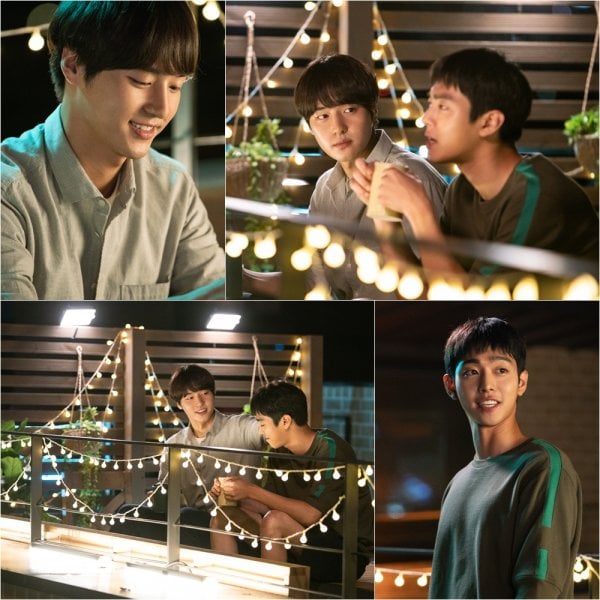 In the photos, Woo Jin and Chan spend some quality time together on a nicely decorated rooftop under the night sky. As if he is complaining to Woo Jin about something, Chan stares at somewhere far into the distance as he tells his story. Woo Jin in turn softly observes Chan.

In another photo, Woo Jin pats Chan’s head, his eyes and laughter full of warmth. Pleased with Woo Jin’s affectionate gestures, Chan smiles gently at Woo Jin. Chan is like a big puppy in front of his uncle Woo Jin.

Through the drama, the relationship between the two men will be explored, as Woo Jin, a man who has turned his back on the world due to events from the past, melts in front of his nephew Chan and shows a warm and considerate side of himself. Chan, on the other hand, will play the role of staying close to Woo Jin as he looks over him and also smoothes over Woo Jin’s injuries.

Ahn Hyo Seop
Yang Se Jong
30 but 17
How does this article make you feel?