At a press conference for the release of his solo album, BIGBANG’s Seungri talked about always feeling like he was behind in BIGBANG, as well as his accomplishments and overcoming others’ doubts about him.

He said, “I was always in the background of BIGBANG, with nothing to really claim as my own. Visually, there was T.O.P, for dancing, there was Taeyang. For music or fashion, it was always G-Dragon, so I thought I’d do my best for variety shows, but then there was Daesung. There was no position that was my own. I had no choice but to do what I could to survive.”

But that doesn’t mean he’s not proud of being a part of BIGBANG. He’s just also proud of how he’s worked to make a name for himself.

The singer has already accomplished a lot. He said, “My rank has risen a lot within YG. I’m receiving a lot of support from the agency, [whereas before], I was always on the back burner. Whenever I had wanted to do something, people were skeptical. Even when I started doing business, they just told me how hard it would be. But I kept making it happen, and [with that], I think I was able to earn the trust of [Yang Hyun Suk]. The label I created was acquired by YG, and now I’m the CEO of a subsidiary called YG-X. As one of the oldest artists of YG, and as a member of BIGBANG, I need to give back for all the support I’ve received. So I’m very serious about these promotions.” 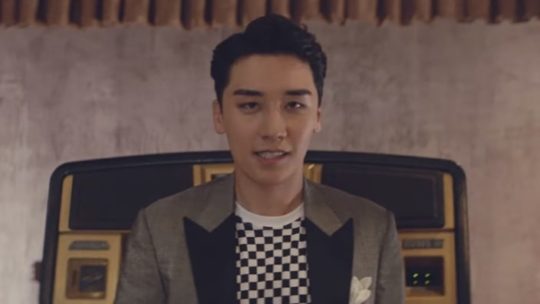 Currently, the other four members of BIGBANG are all carrying out their mandatory national services, in the military and otherwise. He said that with his promotions, he hopes fans don’t feel the absence of BIGBANG. Because he wants to keep BIGBANG’s hiatus as a full group as short as possible, he said he is planning on following his members soon and enlisting in the military early next year.

Closing, Seungri said, “It’s my first solo album in five years, so please check it out,” and joked, “I like rumors, too. Because the worst thing is indifference.”