The cast of “Mission: Impossible — Fallout” faced off against members of “Running Man”!

On the July 22 episode, Tom Cruise, Henry Cavill, and Simon Pegg appeared on the show’s second “Catch the Agent” project.

Jun So Min, Yang Se Chan, and Yoo Jae Suk met with the staff the day before and were told that they’re undercover agents for the M agency. They also received their assignment to find and eliminate the leader of the R agency. When they heard this, they joked that their mission already failed due to their members.

On the next day, the cast members completed various challenges before finally meeting Tom Cruise, Henry Cavill, and Simon Pegg.

The cast of “Running Man” couldn’t hide their excitement at meeting some of Hollywood’s top actors and Song Ji Hyo became shy in front of them.

Tom Cruise, Henry Cavill, and Simon Pegg showed the cast their “finger hearts” before competing against the “Running Man” members in a game of “What’s in the Box?” This is a game where Yoo Jae Suk holds a steel delivery container with an item in it and gives the competitors quick glances at the item. The competitors then have to guess what’s inside of the box.

Simon Pegg chose to compete against Lee Kwang Soo and correctly guessed the item. He shouted, “It’s broccoli! It’s my favorite food,” before he took it from Yoo Jae Suk’s hand and ate it.

Henry Cavill and Jun So Min went next. The actress walked up with a shy smile and shook his hand. Referring to his previous on-screen character Superman, Tom Cruise and Simon Pegg told their co-star, “Use your X-ray vision.”

While playing the game, Jun So Min and Henry Cavill crept closer and closer to Yoo Jae Suk. The actor eventually took the steel box from him, got a good look at the item inside, and said that it was a whistle. When the members cried foul that he looked inside of the box on his own, Henry Cavill protested, “I didn’t know the rules, that those were the rules.” 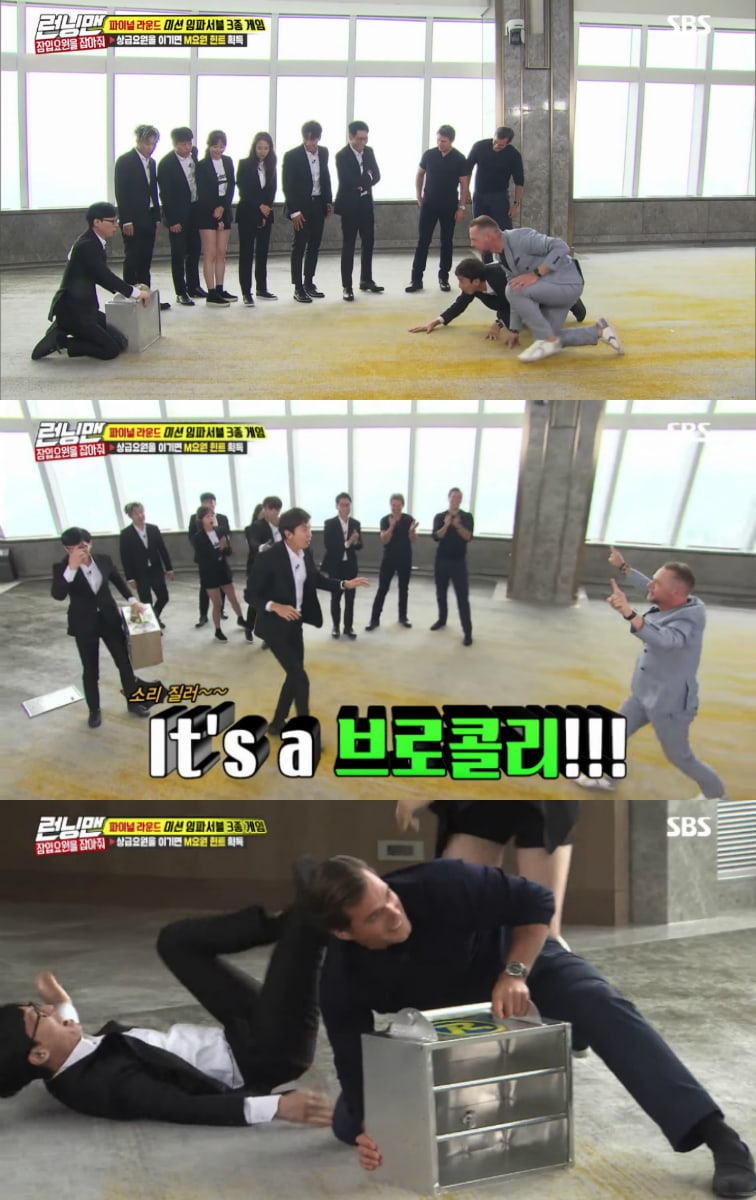 Tom Cruise was the last one up and chose to compete with Kim Jong Kook. The singer was happy to be chosen and said that he would be in the same shot with the actor. Tom Cruise then surprised everyone by correctly guessing that the item inside of the box was a match.

The cast of “Mission: Impossible – Fallout” then played a different mystery box game where they tried to guess what the item was just by touching it. The three actors didn’t show any signs of being scared. Henry Cavill said, “I’m not scared. I’ve been chased by a helicopter flown by Tom.”

After their one hour together was up, the members had to bid farewell to the three actors. The actors expressed how happy they were to appear on the show, and complimented the “Running Man” cast.

Since the cast was unable to take the name tags off of the actors, they gifted Tom Cruise, Henry Cavill, and Simon Pegg their very own name tags and R gold badges.

You can watch the full episode in English below!