“30 but 17” is a romantic comedy about Woo Seo Ri (played by Shin Hye Sun) who falls into a coma at 17 years old and wakes up to find herself 30 years old, and Gong Woo Jin (played by Yang Se Jong) who wants to live a life cut off from society. It also includes the story of 19-year-old high school student Yoo Chan (played by Ahn Hyo Seop) who tries to protect Woo Seo Ri and a mysterious housekeeper named Jennifer (played by Ye Ji Won).

Shin Hye Sun gained recognition after appearing in dramas such as “Secret Forest” and “My Golden Life,” which achieved 45.1 percent in viewership ratings.

The actress said, “Like how there are various life stories, I don’t think there are any characters that aren’t fun when you watch a drama and the characters’ stories from start to finish. As the characters meet one another, they give each other strength and grow together.”

Shin Hye Sun commented, “‘My Golden Life’ is a drama that I’m grateful for. The character of Ji An in ‘My Golden Life’ wasn’t that bright of a character. While living as Ji An for eight months, although I tried not to, I kind of became depressed. I wanted to play a bright character and was able to do that through this drama.”

Speaking about the pressures of starring in a follow-up drama, she said, “The drama that I appeared in did well, but I had just dipped my toes in the water. I didn’t lead the drama. Either way, I’m honored to have been a part of a successful drama.”

She added, “There’s always a burden. It would be a lie to say there isn’t pressure. I instead try to enjoy that pressure. As much as I feel pressure on set, the director, actors, and staff all probably feel it too. So, I’m trying to share those feelings and gather strength to work hard.” 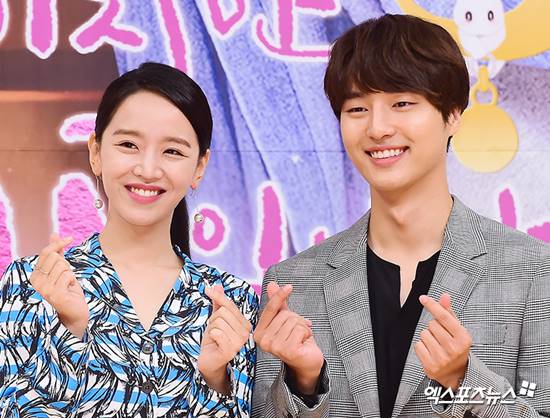 Yang Se Jong also shared his thoughts behind his decision to appear on “30 but 17.” He began, “The reason why I chose this drama was because I felt healing effects while reading the script. I quickly read through it until the fourth episode.”

He added, “Also, [Shin Hye Sun] is really good at acting, so I’m trusting and depending on her. It’s really comfortable on set. We’re filming with barely any mistakes. We’re filming happily and having fun. I’m happy just being able to work on a joyful set.”

Ye Ji Won said, “They’re my juniors, but they’re really good at acting. During the script reading, I watched them closely because they were so good at acting.”

She added, “Yang Se Jong dressed up as a homeless person and it matched him really well. It’s not easy to look good in that, but it was really sexy. Shin Hye Sun mostly filmed in a tracksuit, but she has charms as if she just came out of a comic book. She’s lovely.”

Ye Ji Won continued, “Ahn Hyo Seop’s character is a bit dumb, but he’s really intelligent in real life. If I have lines in English in the script, I learn it from Hyo Seop. That kind of actor really pulls off the character who’s a bit dumb. You can trust me and watch it. They’re really good at acting.”

Ahn Hyo Seop stated, “Our drama has the refreshing, bright feelings similar to sparkling water. I hope that people who are tired from their lives and have many worries can feel healing by watching our drama. A large part of me wants to give a happy feeling to the viewers.”

He concluded, “When the drama comes to an end, I want to hear that I’m someone who has positive energy. There are many parts where you can feel the healing effects. I hope you’ll be able to cool off while enjoying watching our drama.”

“30 but 17” premiered on July 23 and will continue airing on Mondays and Tuesdays at 10 p.m. KST. Check out the trailer below!