Eric Nam appeared as a guest on the July 23 episode of “Please Take Care Of My Refrigerator” alongside model Han Hyun Min. During the episode, he revealed the contents of his refrigerator, his favorite recipes, and more.

The emcees first pointed out that Eric Nam was known for being good at cooking, to which he explained, “I’m not good at cooking, but I enjoy it. I used to cook a lot to relieve stress. But I don’t know if it tastes any good, since I’m the one that’s eating it and it just needs to taste good to me.” MC Kim Sung Joo pointedly asked him what he would cook for a woman, and the singer chose salmon steak. They teased him by saying they would probably find salmon inside his fridge.

When asked about his living situation, he explained that he previously lived with his aunt and uncle, but now he has been living on his own for around three or four years in Korea. Eric Nam added, “My friends come over a lot though. My house is basically a guesthouse. Sometimes when I open my refrigerator, I see things that aren’t mine. There are things that my friends bring from America.”

They then revealed his refrigerator, which appeared very packed with a diverse array of items. The emcees picked out his homemade sweet and sour chicken and the chefs were surprised by his cooking skills. The singer proudly shared his recipe, explaining how the sauce is made of garlic-infused oil, honey, sriracha, and actual pieces of garlic. There were also a lot of beers in his fridge, and he explained, “When I’m not promoting, I like having a beer or a glass of whisky at home.” 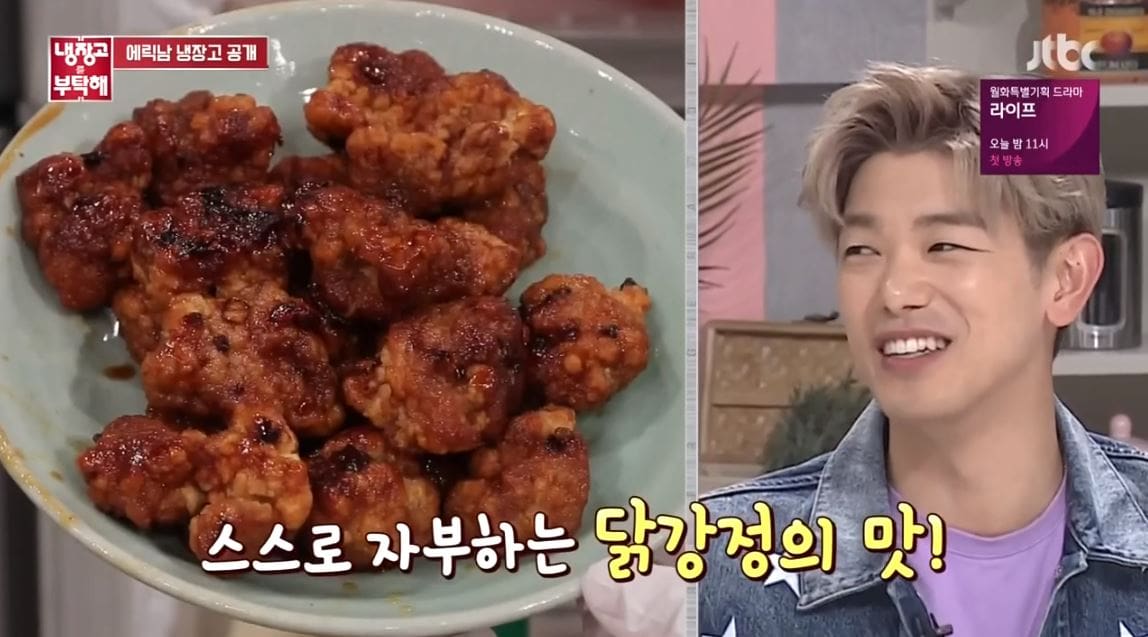 Kim Sung Joo continued to tease Eric Nam by pointing out that there were two types of every drink, and joking that the singer had purposefully separated them to make it look like they weren’t part of a pair. The emcees continued to insinuate at his apparent love life, picking out a pair of ramen, the even number of eggs, and even pints of ice cream. 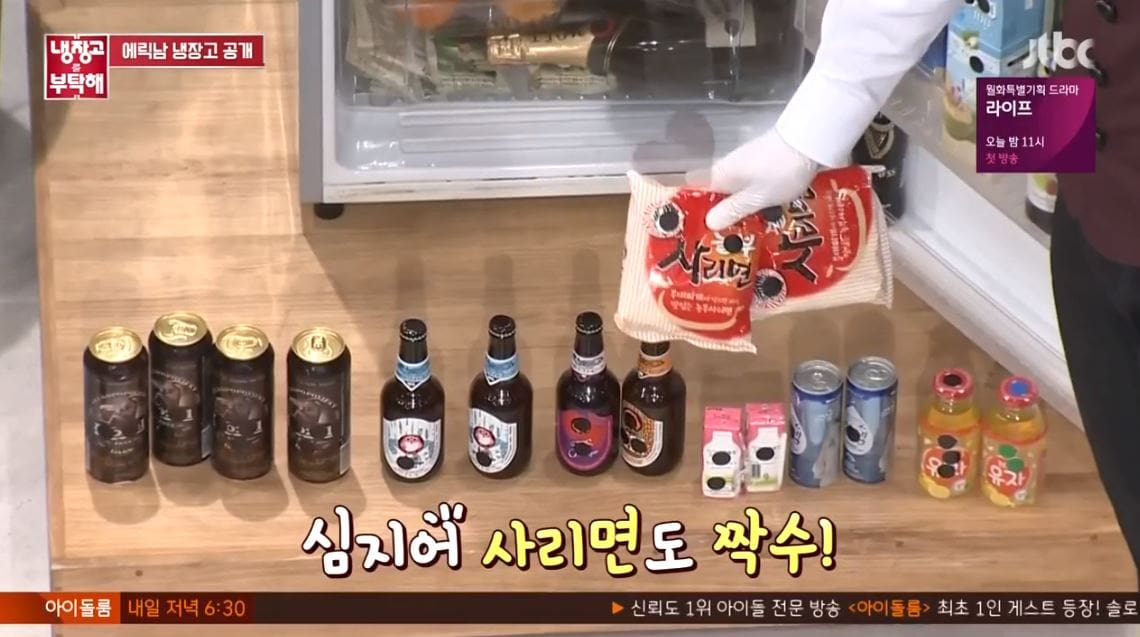 The emcees found many Korean side dishes and asked Eric Nam if he enjoyed Korean food. He answered, “I like Korean food, but I don’t think I’m the type of person where I automatically say I want Korean food when asked what I want to eat. I like braised short ribs [the most out of all Korean food].”

They also showed that there was a whole shelf dedicated to Western food, filled with cheeses, pesto, and more. When asked how he used the pesto, he commented, “I got the pistachio pesto when I went abroad. I use it as pasta sauce or spread it on bread.” 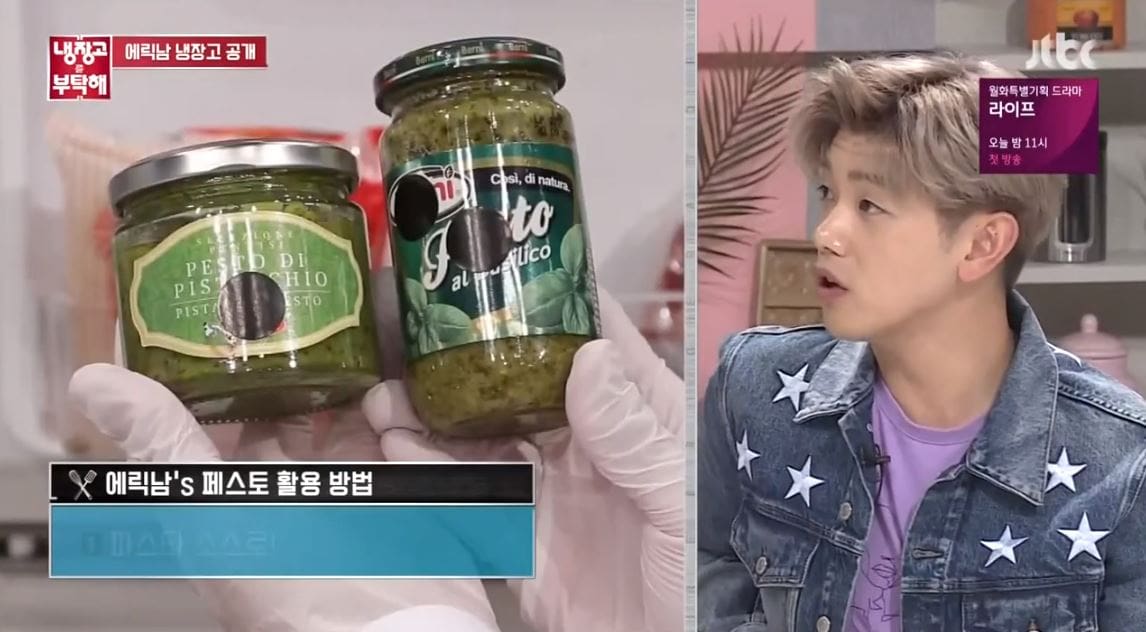 Eric Nam shared his love for spicy food, saying, “I think as I get older, I enjoy spicier foods more. Nowadays, I try more spicy food, and so I use a bit more sriracha. It’s really good if you eat it with eggs.”

The emcees also found salami, which he explained, “It’s a good side dish to wine, or just good with bread.” They found a bottle of champagne, oranges, and eggplants as well. He talked about how he came to enjoy eggplant dishes, commenting, “I started liking eggplant after going to China. They fry it and mix it with sauce, and it was really good. I didn’t eat eggplant until then, but I started making eggplant dishes after that.” 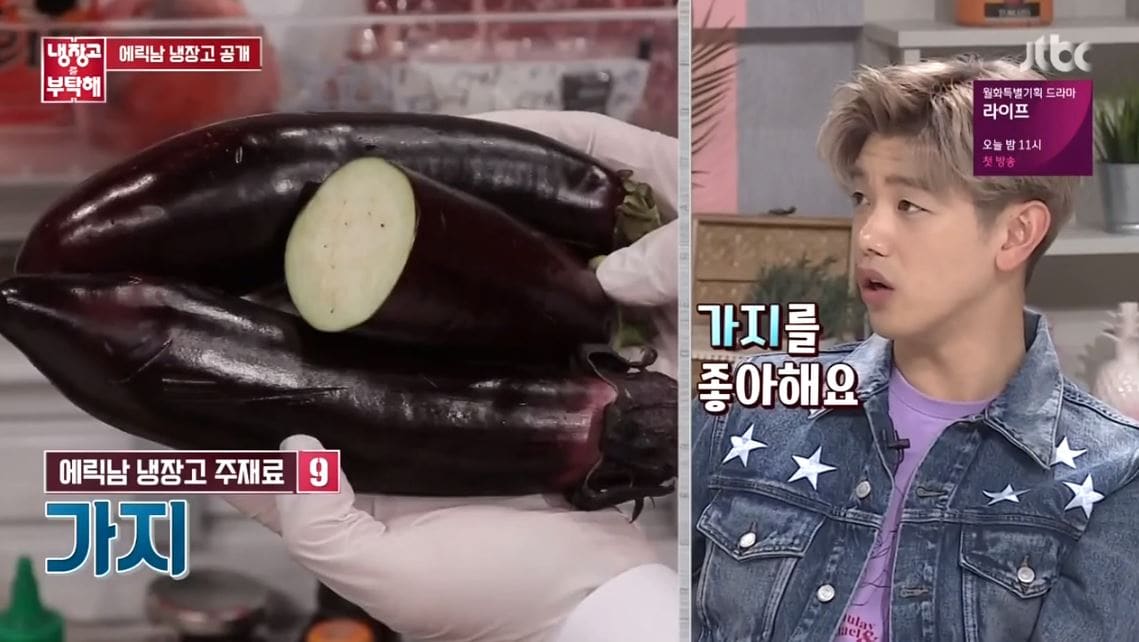 In his freezer, the emcees discovered shrimp, squid, various cuts of beef, and more. Eric Nam said that he enjoyed eating grilled beef, and he would usually use olive oil or butter to grease the pan as well as use salt or truffle oil to cook it. Surprised by his use of truffle oil, they explored his non-refrigerated ingredients and found various sauces and avocados as well. 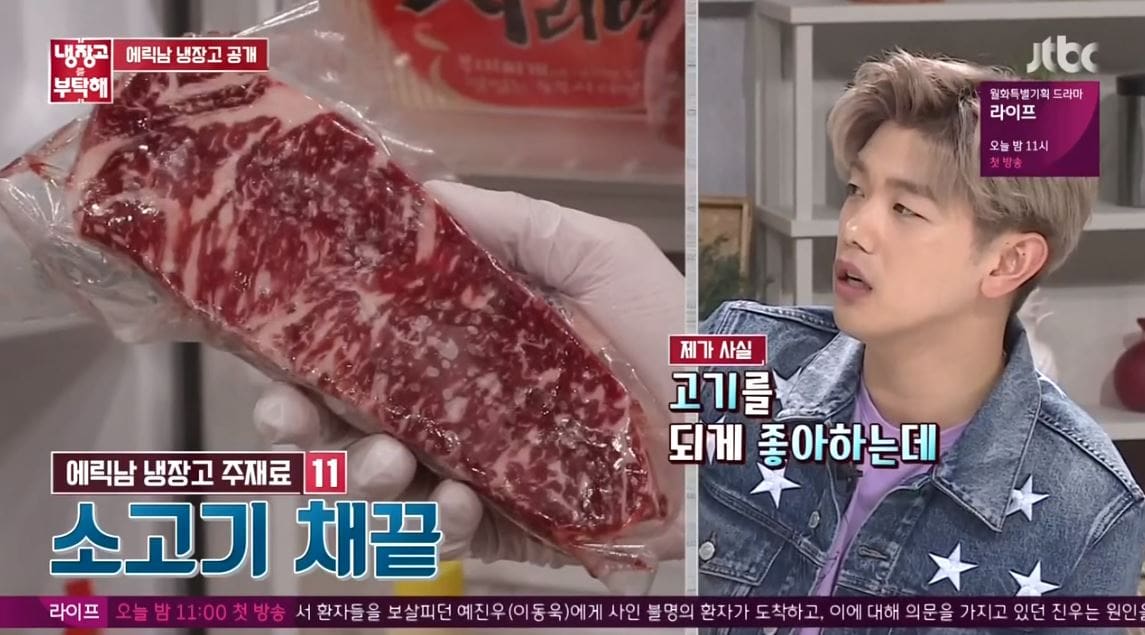 Eric Nam then explained his love of Japanese whisky, and the surprised chefs mentioned how difficult it was to find the whisky he had. The singer explained that because it was such a good whisky, he couldn’t bear to drink it. He also talked about how he sometimes argue with his friends because they would tell him to open it up and he wouldn’t. 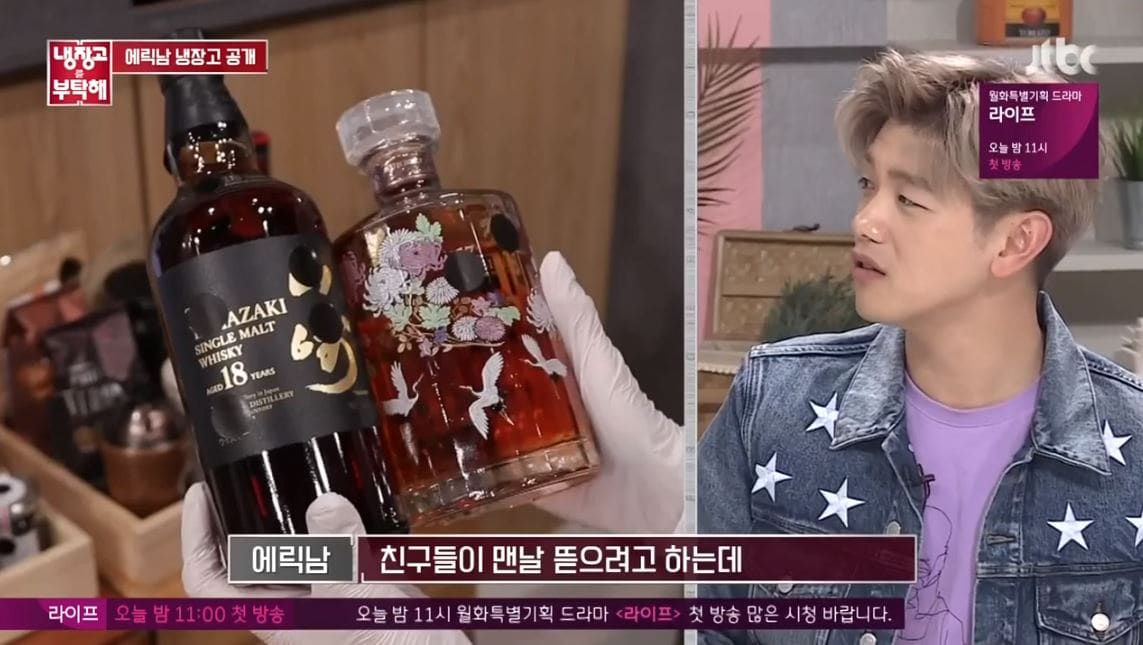 “Please Take Care of My Refrigerator” airs every Monday at 9:30 p.m. KST.

Eric Nam
Please Take Care of My Refrigerator
How does this article make you feel?