TWICE’s Nayeon and Jihyo gave some heartfelt advice to a student dreaming of becoming of a singer.

On July 24, the TWICE members appeared as guests on JTBC’s talk show “Kim Jae Dong’s Talk To You—Are You Happy?” and spoke to 800 audience members.

They said, “This is our first time appearing on a program like this, so we’re honestly really nervous. Since it’s a talking program, we’re also nervous that we may make a mistake.”

Girls’ Generation’s Yuri commented, “The number of our members changed, but aren’t we similar to TWICE? So they feel familiar and like younger sisters. I think it’ll help if you speak like you’re talking to family and friends.”

During the program, a high school student opened up about how she’s an aspiring singer and is experiencing a slump after entering an arts high school. She said, “Since there are many people who sing better than I do, I felt discouraged. Because of that, I’m scared to sing. It’s not certain that I’ll become a singer, so when I have these thoughts, I wonder if this path is right for me. I want to ask how you overcame these times.” She also added that she’s the happiest when she sings.

Nayeon told her, “I also chose this path because I liked singing and being on stage. While being a trainee for six or seven years, I compared myself to someone who was better than me. But when I started thinking, ‘I can’t do as well as that person no matter how much I practice,’ I think I fell into a slump. I wondered, ‘Why can I only do this much?’ and accepted that I’m someone who can only do this much.”

She continued, “My skills then only improved by that much. After I felt that, it was really hard, but I let that go and tried not to compare myself to others. My mind became more comfortable and I could see my skills slowly improving. It was the hardest to let that go. It may be hard, but if you have more ambitions for yourself, then I think you may be able to overcome it.” 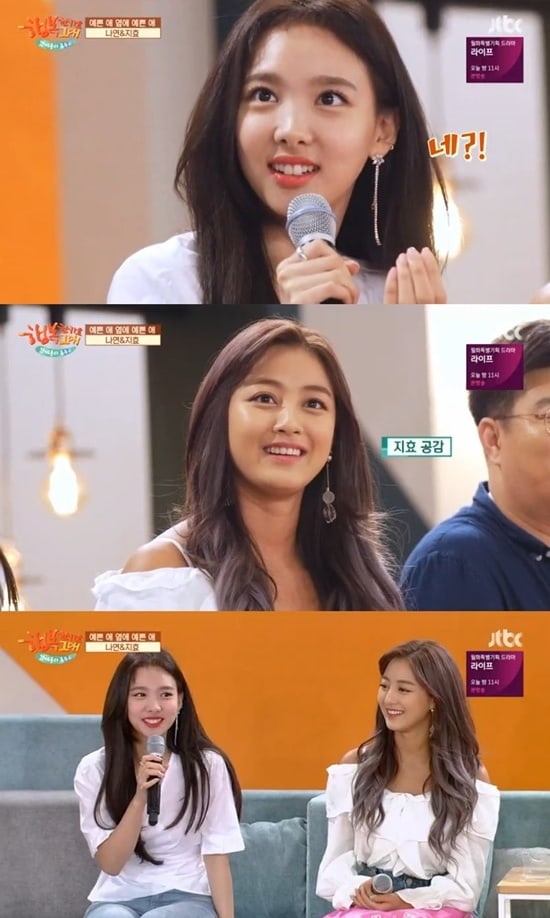 Jihyo began, “I was a trainee for over 10 years. I thought a lot about when I would be able to debut and if the job of a singer was right for me. When I wanted to quit, I met the team TWICE and became a singer. I thought that I would be so happy, but I became the main vocal. That pressure was so big that I cried every day.”

She added, “Becoming a singer didn’t necessarily make me always happy. I also became scared of how others viewed me. I started to have these kinds of thoughts and then we held our first solo concert. You said earlier that singing and seeing others become happy while watching you sing made you happy.”

She concluded, “I felt that for the first time after doing the concert. You knew before me that you’re happy when you’re singing. If you do something that makes you happy, then the people around you who see you will be happy too. I really wanted to tell you that.”

TWICE
Jihyo
Nayeon
Kim Jae Dong's Talk To You—Are You Happy?
How does this article make you feel?