Will “What’s Wong with Secretary Kim” be able to have a happy ending?

With only two episodes remaining until the finale of tvN’s “What’s Wrong with Secretary Kim,” here are five final key things to look forward. 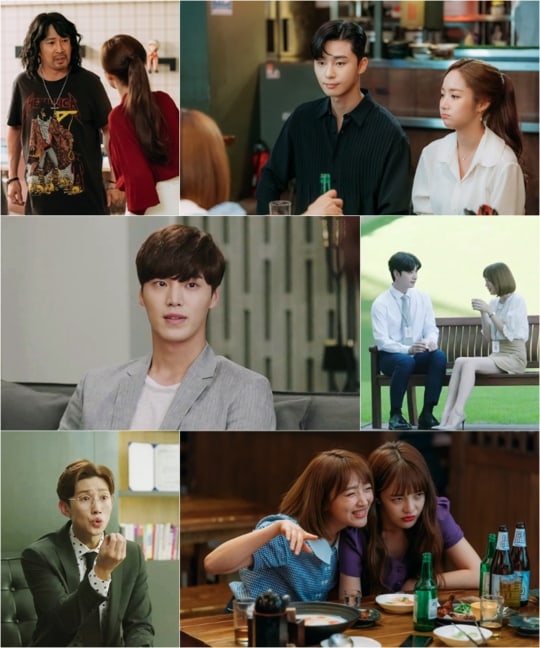 Many are anticipating Lee Young Joon (played by Park Seo Joon) and Kim Mi So (played by Park Min Young)’s happy ending. At the end of episode 14, Young Joon proposes to Mi So by saying, “I want to be Kim Mi So’s husband.” But in midst of this romantic moment, Mi So’s father (played by Jo Duk Hyun) shouts at them from Mi So’s bed, “I object to your marriage!” An unexpected obstacle has appeared in front of the couple, from their relationship that began with sweet flirting to eventually showing off the essence of a high-speed romance. Many are wondering how the objection of Miso’s father will influence their romance. At the same time, many are curious as to what type of ending Young Joon and Mi So will meet in the last two episodes.

2. Lee Tae Hwan, stripped of his guilt. Will he be able to find true happiness?

After believing he was the victim of the kidnapping incident, Lee Sung Yeon (played by Lee Tae Hwan) was able to discover the hidden truth in his distorted memories after 24 years. But when he discovered that the true victim was in fact Lee Young Joon, Sung Yeon cried tears of guilt. Sung Yeon had lived life blaming Young Joon whenever he felt he was the most unhappy. Now that Sung Yeon has found his memories and stopped hating others, many wonder if he will be able to love himself and find an honest happiness.

3. “Careless Couple” Kang Ki Young-Seo Hyo Rim. Will they be able to get back together?

Other than the Young Joon-Mi So Couple, there are various other office romances the drama explores. One relationship in particular that many are curious about is Park Yoo Shik’s. Although Park Yoo Shik (played by Kang Ki Young) played cupid to Young Joon and Mi So’s relationship and acted as Young Joon’s relationship coach, he had some regrets regarding the repeated mistakes he made in his own relationship with his ex-wife Seo Jin (Seo Hyo Rim). He misses Seo Jin, but he had created a misunderstanding due to his unique “carelessness.” However, even after this incident, Yoo Shik still longs after Seo Jin, so many are anticipating their reunion and Seo Hyo Rim’s reappearance in the drama.

4. “Neighbors” Hwang Chansung-Pyo Yejin. Will they become a couple?

Another office couple to watch out for is Go Gwi Nam (played by 2PM’s Chansung) and Kim Ji Ah (played by Pyo Ye Jin). After Ji Ah discovers that Gwi Nam is persistently saving up money for a Western style suit for his future family, her interest in Gwi Nam begins to grow. On top of that, after it was revealed that Gwi Nam secretly helped looked after Ji Ah’s business, many are wondering what direction their relationship will go from here.

5. The story of those who carry pain inside

“What’s Wrong with Secretary Kim” told the story of the kidnapping incident from 24 years ago that entangled Young Joon, Mi So, and Sung Yeon in a world of hurt. Many are curious to see how those who have been hurt and stuck in their pasts will begin their healing processes in the final episodes.