With the hit drama coming to an end this week, tvN shared stills on July 25 of a scene coming up in the next episode.

Lee Young Joon has been suggesting to his secretary Kim Mi So that they get married ever since she first announced she was going to quit, as one of his attempts at getting her to stay.

Now that they’re dating, Kim Mi So said at the end of episode 14 that one of her dreams has been to have dinner with her husband after work and spend their evenings together. Although she at first was embarrassed when she realized she’d said “husband,” Lee Young Joon took her hand and promised to make her dream come true.

“I want to be your husband,” he said. “I want to marry you, Kim Mi So.” Their attempt at a sweet kiss after this was ruined when her father who’d been hiding in Kim Mi So’s bed jumped out to say he objected. Many have been wondering how her father’s objection will affect the pair’s hopes to get married.

Despite his objection, the new stills show Lee Young Joon having prepared a romantic proposal event and Kim Mi So looking at him with a touched expression. Lee Young Joon sits at a piano and seems to be singing a serenade to her, making fans’ heart race just from the photos alone. Lee Young Joon has sung to her before in the show, and viewers are curious to find out what song he’s chosen for his proposal.

Kim Mi So looks stunning as always in a glamorous date night outfit, and there appear to be tears in her eyes as she’s moved by his event. The next episode will show how Kim Mi So responds to this proposal from Lee Young Joon. 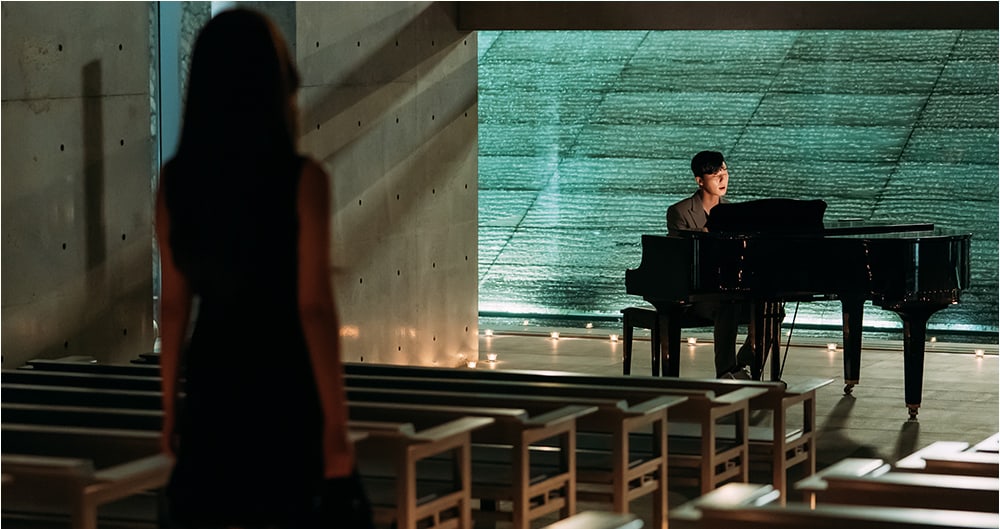 A source from the show said, “Park Seo Joon has been making viewers’ hearts race as he surprises Park Min Young with proposals since the first episode, and in episode 15 today he’ll make his final proposal. Park Min Young has shown a different reaction to each of his proposals, so please look forward to how she’ll reply to Park Seo Joon’s sweet serenade.”

They added, “A surprising ending is awaiting, so please look forward to it.”

“What’s Wrong with Secretary Kim” airs its final episodes this week on Wednesday and Thursday at 9:30 p.m. KST on tvN.

Watch the show from the first episode below!