KARD discussed their latest comeback with “Ride on the Wind” and memorable moments in a recent interview with Seoul Newspaper.

As stated by the members themselves, “Ride on the Wind” is an EDM song with dance hall and house elements that is perfect for the summer.

Jiwoo explained the difference from their newest song and “Hola Hola,” saying, “If we had a tropical and refreshing vibe last time, then this time, we prepared a song that is easier on the ears.” She added that the song has a melody that is easy and makes you want to sing along.

“Ride on the Wind” features J.Seph singing more prominently. He commented, “I practiced while thinking I should listen and imitate the guide track as much as possible. I don’t necessarily sing well, but I tried my best to sing with emotion. I had fun working on it.”

Jiwoo shared that the song was originally written with a male vocalist in mind, which is how J.Seph ended up singing more and complimented her fellow member. BM chimed in, “I believe that J.Seph’s vocals are the ‘killing aspect’ of this song,” with Somin adding, “It’s memorable because he comes in with an impact in the [first] verse.” 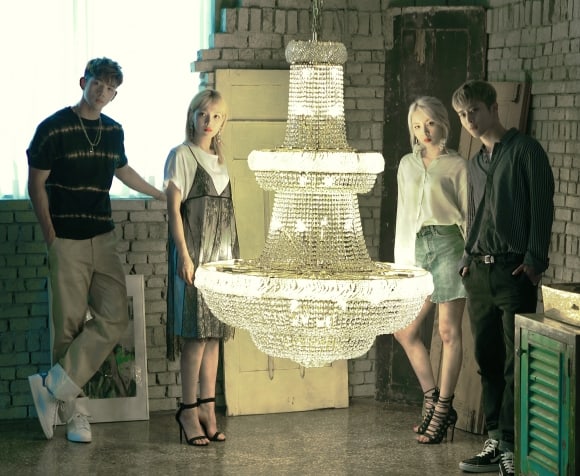 In addition to the flowing choreography and their lightweight stage outfits, the music video for “Ride on the Wind” also helps accentuate the bright and summery song. KARD filmed the music video on Jeju Island at the beginning of July.

J.Seph amusingly recalled, “I was wearing a very thin cloth top, but I was embarrassed by [how it looked] in the front. The stylist said she had brought something amazing, and gave me patches. I became more confident after I put them on my chest, but it was really hot weather-wise.” He explained that he ended up having awkward sweat stains instead, adding, “I had managed to hide [what I wanted] to hide, but I ended up with a bigger problem on my hands. I dried them off with two mini fans.”

Jeju Island is also known for having unpredictable weather, and the group had to overcome sudden rain showers and significant temperature changes. KARD also filmed on several different types of terrain, each with its own set of problems.

Jiwoo explained, “We filmed at three places for the scenes that feature the choreography. We first filmed on a sandy beach and it was difficult because our feet keep sinking in. The second place was meadow-like area, and there was a lot of moss on the rocks. We also slipped on the rocks. The last place featured a very beautiful view of the sunset, but it is memorable because we ended up having to dance on top of cow dung.

KARD also briefly touched on their upcoming domestic and international activities. Their concert in Korea next month will showcase solo and unit performances, and BM will will be revealing a self-composed track for the first time. The group will also be embarking on a South American tour in September. Jiwoo commented, “We started off with small-scale concerts with audiences of 200 to 300 people, but now we perform for audiences of 5,000 to 6,000.”

What did you think about KARD’s newest song and J.Seph’s singing?