Watch: BIGBANG’s Seungri Surprises A Fan By Personally Delivering Concert Tickets To Her

What if BIGBANG’s Seungri personally delivered tickets to his concert to you?

That’s exactly what happened to a lucky fan. The idol made his way to his hometown Gwangju to surprise a fan by pretending to be a parcel deliveryman so he can make her day with concert tickets.

During the ride there, Seungri commented, “This feels strange. I’m nervous about going to my hometown to deliver [concert] tickets, and I’m also excited to meet my fan.” Then he added, “While being part of BIGBANG, I held many concerts, but for the first time, I’m singing more than two songs by myself. [My fans] never saw me sing songs for a long time, so I think there will be many things to see at this concert.”

Seungri continued, “It’s my first time delivering [concert tickets] myself, but the chosen winner coincidentally lives in my hometown Gwangju of Jeolla Province. So I came here on the morning train, and I’m on my way to give these to her. Actually, I didn’t eat yet. While I’m at my fan’s house, I’m hoping I can have lunch there. I’m so hungry!”

Then Seungri called his fan and pretended he was a deliveryman with a package for her that had to be signed by her personally. The fan seemed to be on guard though as she asked him what parcel service he’s from. Fortunately, Seungri had a quick answer for her, and she believed him this time. After hanging up, Seungri said, “I didn’t get caught! I was shocked! When she asked me what parcel service I’m from, my back started sweating! Fortunately, I was able to answer because I know one parcel service.”

When Seungri rang the doorbell and the fan came out, she couldn’t hide her joy and surprise at seeing the idol. Her mother was shocked as well. Yet, they warmly welcomed the sudden visitor inside their home. Seungri gave her two concert tickets so that she could attend his concert with her younger sibling. That wasn’t all though. Seungri also gifted BIGBANG merchandise to her as well!

After all the gifts were unveiled, Seungri suddenly requested to see his fan’s room so that he could confirm that she truly was his fan. He said, “If I go to her room and another idol’s picture is there…Like if there’s a giant picture of [Wanna One’s] Kang Daniel in there…If you’re truly my fan, you should have a [bromide] next to your bed.” The fan confessed, “I wrapped up [the bromide] well and am preciously storing it,” and Seungri laughed in disbelief.

Fortunately for both Seungri and the fan, her room was filled with pictures of BIGBANG, including their calendar. Seungri pretended to search for Kang Daniel, but the fan assured him she really doesn’t have a photo of him. Instead of Kang Daniel, Seungri found a water bottle from one of his ramen restaurants and grew touched by her action.

Right when Seungri was about to leave, the fan’s father came home and admitted he raced home to meet him. Seungri commented, “I’ve been a part of BIGBANG for over ten years now, but never have I been so close to my fans and shared conversations with them nor met their families before. So I’m very happy to meet you.” 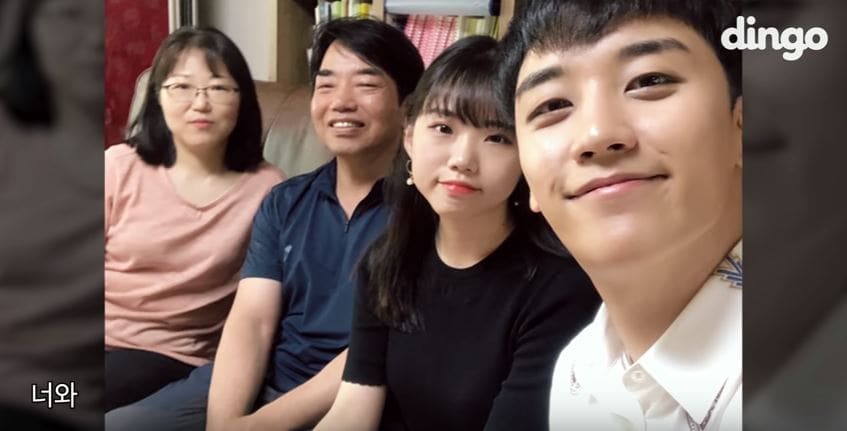 Check out their special meeting below!

Seungri recently made a comeback with his title track “1, 2, 3.”