Actress Park Sol Mi and the producing directors (PD) of SBS’s “Law of the Jungle” had nothing but praise for Wanna One’s Ha Sung Woon and Ong Seong Woo!

The actress appeared on SBS LoveFM’s “Song Eun Yi and Kim Sook’s Unni’s Radio” with Park Jung Chul and Park Sung Kwang to promote their appearance in the upcoming episodes of SBS’s variety show “Law of the Jungle.”

She praised both Wanna One members who appeared on the show as she added, “I was so happy to share the experience with Ha Sung Woon and Ong Seong Woo. It was my first time interacting with idols, and they were very hardworking, kind, and well-mannered. Interacting with them made me a bigger fan of them.” 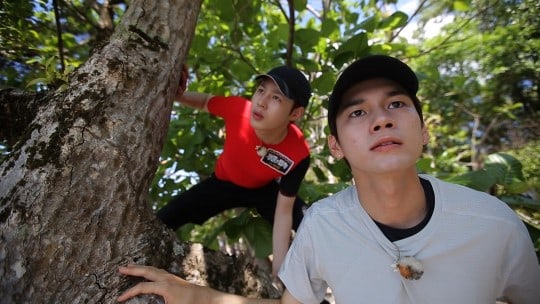 PDs Min Seon Hong and Ryu Seung Ho met with YTN star recently to talk about the upcoming “Law of the Jungle in Saba” series, and they also spoke highly of the two Wanna One members. They gave Ong Seong Woo and Ha Sung Woon a thumbs up as they said, “I think we can say that they were the idols who shined the most on ‘Law of the Jungle.'”

According to the production staff, getting Wanna One on the show has been a long-term effort that has taken almost a year. They first sent in an offer last September ahead of the Cook Island series but things did not work out as Wanna One’s packed schedule didn’t leave much room for such a long trip overseas. At the time, Ong Seong Woo and Ha Sung Woon had expressed their disappointment at being unable to appear on the show as long-time fans of “Law of the Jungle,” and the two had promised that if they were given the offer again at a later time, they would accept it.

PD Min Seon Hong said, “We were surprised to learn that the two members had undergone underwater training for the show. It’s not something you can master in a short period of time, but they still did their best and it was a skill they utilized during the trip.” Their passion and determination was enough for even Kim Byung Man to say, “The stars of Sabah are Wanna One.” Despite the extreme humidity, Ong Seong Woo and Ha Sung Woon are said to have actively stepped up to participate in every activity they could.”

The production staff especially applauded the two members for truly enjoying their experience. PD Min Seon Hong said, “Ong Seong Woo and Ha Sung Woon seemed to truly enjoy their time away from their busy schedule in the jungle. They were amazed by everything and their determination to not miss a single thing was very memorable. PD Ryu Seung Ho said, “Sometimes, we’ve felt that some people felt happy when they caught a fish because it would give them more air time, but with those two, they just focused on working hard to feed their castmates. They didn’t really pay the cameras much attention because they were working so hard.”

The upcoming “Law of the Jungle in Sabah” series will premiere on July 27 at 10 p.m. KST.

Editor’s Note: Article has been modified to reflect the correction made to the error in the original source.