Block B’s Zico shared his thoughts behind his decision to return to JTBC’s “Ask Us Anything.”

On July 28, Zico appeared as a guest on the variety show along with MMA fighter Kim Dong Hyun. During his previous appearance on the show last year, Zico memorably faced off against Lee Soo Geun in a speed reading game. After putting his watch on the line, Zico lost both the game and his watch to the comedian.

Zico commented, “That day, I got my watch back after filming ended. But afterwards, I had bad memories with that watch, so I haven’t worn it a single time since.”

He then showed the members that he was wearing a watch on both of his wrists. “I developed a trauma,” joked Zico. “I came for a rematch.”

However, the rapper had another reason for wanting to appear on the show a second time. During the segment in which the members had to guess answers to questions about the guest, Zico asked, “What’s the reason why I wanted to reappear on ‘Ask Us Anything?'”

Super Junior’s Kim Heechul incorrectly guessed, “[Because] you were humiliated after losing to Lee Soo Geun last time in a speed reading game and wanted to get revenge?”

Seo Jang Hoon made others laugh when he suggested, “You were touched by the members’ warm hearts and came on the show to give us 10 million won (approximately $8,973.35) each?”

Zico then gave the members a hint by saying, “I like new things and don’t like repeating myself.” When Min Kyung Hoon asked, “You want to recruit me as a featured singer?” Zico evasively replied, “I recently listened to Buzz’s entire second album.” 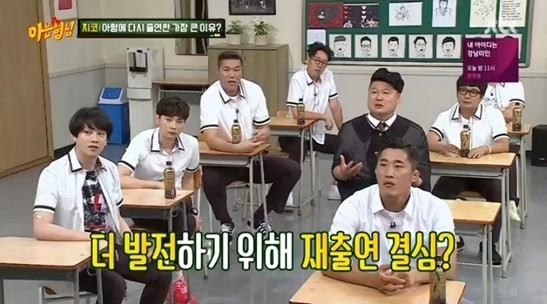 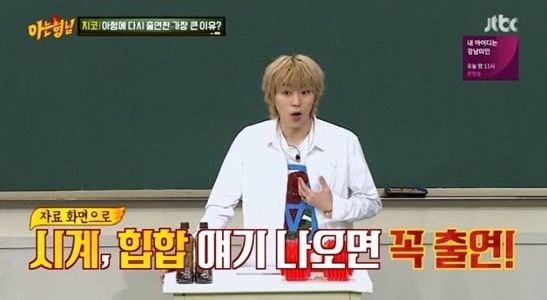 In the end, Lee Sang Min came the closest to the correct answer. He guessed, “When watching your past footage, you didn’t look handsome, so you wanted to change it.”

Zico explained, “I’m not quite trying to change it because I didn’t look handsome. It’s more that after my appearance, I was mentioned a lot on the show. I was really grateful. I appeared [on the show] a lot through my past footage. [For example,] if someone said, ‘Don’t wear a watch,’ a small photo of my face would appear.”

He continued, “But every time I saw my old footage, I thought, ‘It’d be nice if it looked different.’ I wanted to change it to my most recent appearance. Right now, I look a bit kinder. I wanted to change my image to a softer image in the footage.”

The rapper then displayed several facial expressions for the show’s archives, including happiness, sorrow, and anger, so that the footage of his new image could be used in the future.

Block B
Ask Us Anything
Zico
How does this article make you feel?